“How to Train Your Dragon 2” Movie Review: A sequel that soars to great heights! 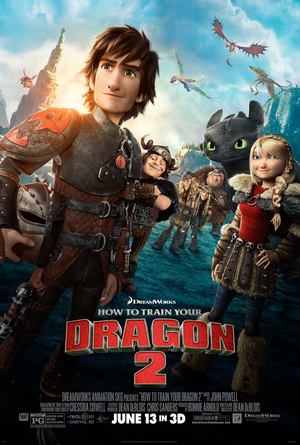 It’s tough to create a sequel that is as good as its predecessor, if not better. However, How to Train Your Dragon 2 hit all the right marks. The newest installment in the series expanded the animated world, brought back familiar characters, introduced new ones, and delivered a story that was even more enjoyable than the first film.

The review contains spoilers regarding the fate of some of the characters. You have been warned!

The growth is obvious from the get-go. The animation studio has out done itself compared to the first film, which was released in 2010. I greatly enjoyed the 3-D, and the wonderful and spacious new environments the story took place in.

Coming to the story, the film jumped 5 years ahead after the events of the first film, and the Vikings have come to terms with living with dragons. It was a bold move to age the characters but the film manages to pull it off to its advantage. The main character, Hiccup (Jay Baruchel) now twenty years old, goes on adventures in order to explore new lands, with Toothless by his side. Hiccup has always had an adventurous and an inventive side to him. However, his father, Stoick the Vast (Gerard Butler), wants him to take his place as the Chief. This leads to a conflict between the two characters. In the first film, his father didn’t understand his son’s interests, and even in the sequel he has his own ideas about what Hiccup should do. I was expecting a friendlier and more understanding relationship between the two males. It made sense his father would want him to become a leader, but I don’t think he should’ve pressured his son as much as he did in the film.

On one of their expeditions, Hiccup, and his girlfriend, Astrid (America Ferrera) happen upon the remains of a fort and meet a dragon trapper named Eret (voiced by Kit Harington. Game of Thrones fans rejoice!). From there the conflict in the film comes into play. The antagonist, a dragon hunter by the name Drago Bludvist (Djimon Hounsou), has his own army of dragons he’s planning to use them for nefarious cause. Another character, who I presumed dead, made an appearance and played a major role in the story, Hiccup’s mother, Valka (voiced wonderfully by Cate Blanchett). The film made it clear that Hiccup got his adventurous side from his mother, who had been saving dragons from Drago for twenty years.

The film also built upon the world of the dragons. Apparently all dragons answer to a humongous Alpha, known as a Bewilderbeast. Drago plans to fight the current alpha with his own Bewilderbeast and gain control of every dragon, which he eventually does. It was heartbreaking to see Toothless under the control of the new alpha and attacking Hiccup. I remember when the first film went into dark territory and made Hiccup lose his leg. The sequel gets even darker and Stoick loses his life in order to save Hiccup from Toothless’s attack. I couldn’t believe what I was seeing on screen. I wasn’t expecting the film to do such a thing. Yes, gravely injure the father; I’ll be fine with that. But killing him? No! You can’t give him back his long lost mother and then take away his father!

Another thing I liked about the film was Astrid’s role. Even though she’s the male protagonist’s girlfriend, she is still her own person. The writers did a good job portraying her as a strong female character, who even took on the role of leader more than once. There was also a character that came out the closet in the film, the blond Viking who trained Hiccup’s group back in part one, Gobber the Belch (Craig Ferguson). It’s good to see more gay representation in animated films, but his coming out didn’t come close to the hilarious gay reveal at the end of ParaNorman.

In the end, How to Train Your Dragon 2 is an enjoyable film with some serious undertones. It’s an example of doing an animated sequel right. The next installment in the series has already been confirmed for a June 17, 2016 release date. If the third film is anything like the sequel, I will definitely be watching it.

Have you watched How to Train Your Dragon 2 yet? Please share your thoughts in the comments section below!

TOPICS how to train your dragon 2movie review