A few weeks ago, London welcomed its first edition of Heroes & Villains Fan Fest.  The organizers of HVFF are also in charge of the famous Walker Stalker Con. After two successful WSC in London, they decided to bring their other franchise overseas, and it was quite a success.

Notably, though HVFF has its share of panels, it’s more so a signing event than a full-on Comic Con. It is called a Fan Fest for a reason. The focus is on the interaction between the attendees and the celebrity guests as fans get to spend a time with their favorite actors at a photoshoot or at their autograph tables. 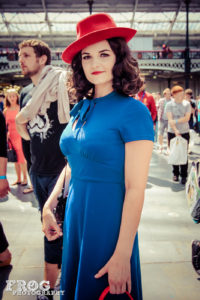 I was not sure at first how the event would unfold as HVFF suffered two blows right before the weekend. After the Manchester terrorist attack three days prior to HVFF, many attendees were worried that London remained an active target.  The HVFF team was very proactive on the topic of security and issued clear and reassuring guidelines for everyone involved via email, social media and on site. During the con, several security checkpoints were setup to enter the venue and bomb sniffing dogs patrolled inside. At no point, did I feel unsafe or that security was excessive. Kudos to the HVFF team for reacting so quickly. The second blow to HVFF was that headliner Melissa Benoist (aka Supergirl) and fellow star Chris Wood cancelled 48 hours before the con. While I think people should never buy tickets to a con for one specific actor, Benoist was a big draw for the crowd, and I have heard that some people decided not to come following the announcement.

Another issue was that HVFF took place on the same weekend as MCM London, Europe’s largest comic con, which was known several months beforehand. Some people decided to split their time between the two cons, which made for a quite relaxed HVFF with ample room to move around.

HVFF took place at the Olympia London, which allowed all the activities to be in one big room: panels, vendors, photoshoots, and autograph tables. The large glass ceiling also allowed a lot natural light which I always appreciate for photography reasons. The heat was manageable despite the high temperatures that weekend. 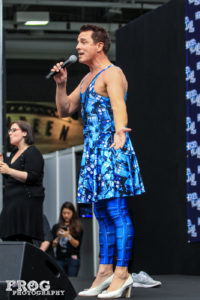 HVFF had an impressive guest line-up for their first time in London which included the following: Stephen Amell (Arrow), Emily Brett Rickards (Arrow), John Barrowman (Arrow, Torchwood, Legends of Tomorrow), Hayley Atwell (Agent Carter), Stanley Tucci (The Hunger Games, Captain America), Brandon Routh (Legends of Tomorrow), Michael Rooker (Guardians of the Galaxy), Sean Gunn (Guardians of the Galaxy), Robbie Amell (The Flash), Shantel VanSanten (The Flash, One Tree Hill), Katie Cassidy (Arrow), Josh Segerra (Arrow), Matt Ryan (Constantine), Mehcad Brooks (Supergirl), Italia Ricci (Supergirl), Milo Ventimiglia (Gotham, This is Us), Robin Lord Taylor (Gotham), etc. All the guests seemed very happy to be there (minus one guest that shall remain nameless because they always seem to be quite a disappointment for the attendees over here in the UK). When they were not in a panel or at a photoshoot session, the guests were at their table to meet the fans. For most of them, people could buy an autograph, a selfie, or a combo of both. I found the lines very manageable but I had a VIP badge courtesy of HVFF, so I never waited very long. If a VIP ticket is not in your budget, do not worry, I have met many General Admission attendees who managed to meet everyone on their list with a little planning. It also depends on the guests. The John Barrowman line stayed long all weekend, and people had to wait several hours to meet him. The Barrowman experience is worth it, though. For the biggest guests like Stephen Amell & Emily Bett Rickards, HVFF held an autograph pre-sale a few weeks before the event to regulate the crowd. In the end, both guests were able to interact with all the pre-sale ticket holders and many in the general audience as their lines were open to all in the afternoon, which I thought was great.

I did not participate in any photoshoots so I don’t have personal experience with how they went; however it seems that people were happy with the organization and 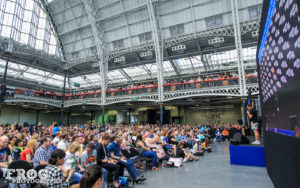 end results. One important thing if you’re planning to go to a HVFF near you, do not hesitate to book your photo op early, they sell out quickly!

My favorite part was the panels. They were very well organized with respect to lines and badge priority. They had a sign language interpreter on stage and the panels were visible on two big screens with live captioning. Because the con was in one big room, people who did not manage to get a seat could still watch the panels from the sides. The panel I was most looking forward was John Barrowman and boy he did not disappoint. His entrance in a Tardis dress set the tone and I was in stiches for the next 45 minutes. This man is hilarious. All the panels were great. The audience came up with good questions and it was clear the guests were happy to be on stage and share a moment with the fans. 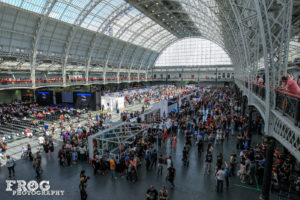 There were not that many vendors at the Olympia but those present had good content. I believe HVFF is planning on having more space for them next year. They managed to bring two great artists: James Palmer & Lord Mesa. Lord Mesa’s table stayed busy the entire weekend but he was kind enough to squeeze in an interview with us. You can read it here.

Once again, the MVPs of the weekend were the volunteers.  They were amazing and always in good spirits. All of them were ready to help and always provided me with the correct information which is worth noting.

All in all, HVFF ran very smoothly. It is obvious that it is not their first time. To be honest, my main complaint about HVFF is the prices. A few of the guests were ridiculously overpriced. It might work well in the US but the UK/Europe con circuit has always been known for its reasonable prices and 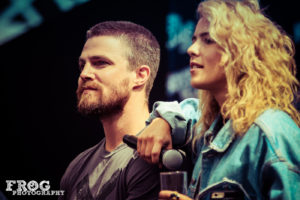 HVFF kind of sticks out in that respect. That being said, I am a regular con goer and therefore have to save money for many cons a year, whereas most of the HVFF audience only attend one con a year which makes their budgeting a bit easier.

The atmosphere was great and the attendees had a fun weekend so I believe Heroes & Villains Fan Fest was a success. Due to the focus of the con, their demographic is smaller than bigger comic cons, but it attracts a strong and loyal fanbase who will come back year after year. HVFF has already announced they will be back in London next year, but you can still catch a Fan Fest this year in the US. Find out about the dates and places on their website.

Previous:Koji Igarashi Reveals New “Bloodstained” Content Ahead of E3 2017
Next: “The Mummy” Review – A Weak Start To The “Dark Universe” With Tom Cruise