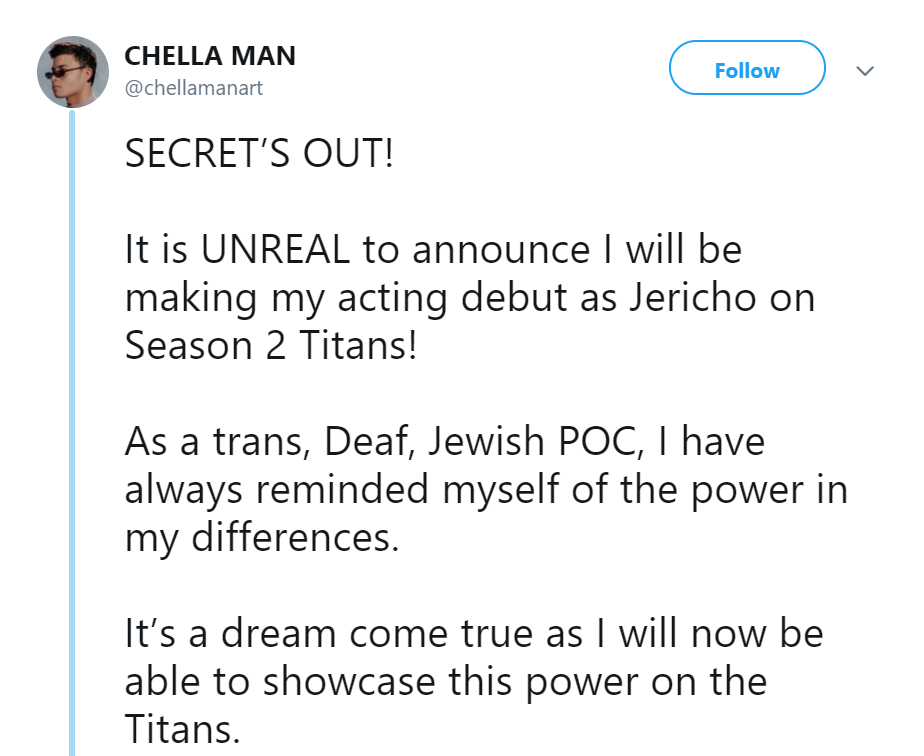 I’m not a fan of Titans. The first season on the DC Universe streaming service was a complete mess and came across as trying too hard to be edgy. Having said that, I’m glad that Chella Man has been cast as Deathstroke’s son (Jericho) in the upcoming second season.

Chella Man will be playing Joseph Wilson, who goes by the codename Jericho in DC Comics. The character had his vocal cords severed by assassins when Deathstroke (Joseph’s father) wasn’t able to save him. Jericho is able to possess people by making eye contact. Fans of the live-action Arrow series might remember the character being portrayed by actor Liam Hall. Jericho is bisexual in the comics.

The first season of Titans debuted on DC Universe on October 12, 2018. It consisted of 11 episodes. The main team included Dick Grayson, Raven, Beast Boy, and Starfire. Other characters were Hawk, Dove, Jason Todd, Trigon, and Donna Troy, to name a few.

The series also served as an introduction to Doom Patrol, which is currently airing its first season on the streaming service. It has some queer representation through Negative Man (played in-part by Matt Bomer).

While I like the tone of Doom Patrol, I just don’t enjoy what Titans brought to the table. The team was barely working together during the story and there was too much going on. Also, I’m not a fan of forced dark narratives which make me laugh when characters try to be edgy. And as far as my opinion goes, they messed up Raven’s character big time. I can’t get over that wig!

Anyway, I’m glad for Man because of the new role. Deathstroke will be played by Esai Morales.

Are you a fan of Titans? Are you looking forward to the second season? Let us know.

Previous:“Black Summer” Coming To Netflix This April! Are You Ready For A “Z Nation” Prequel?
Next: The Disney-FOX Merger Deal Officially Finalizes!