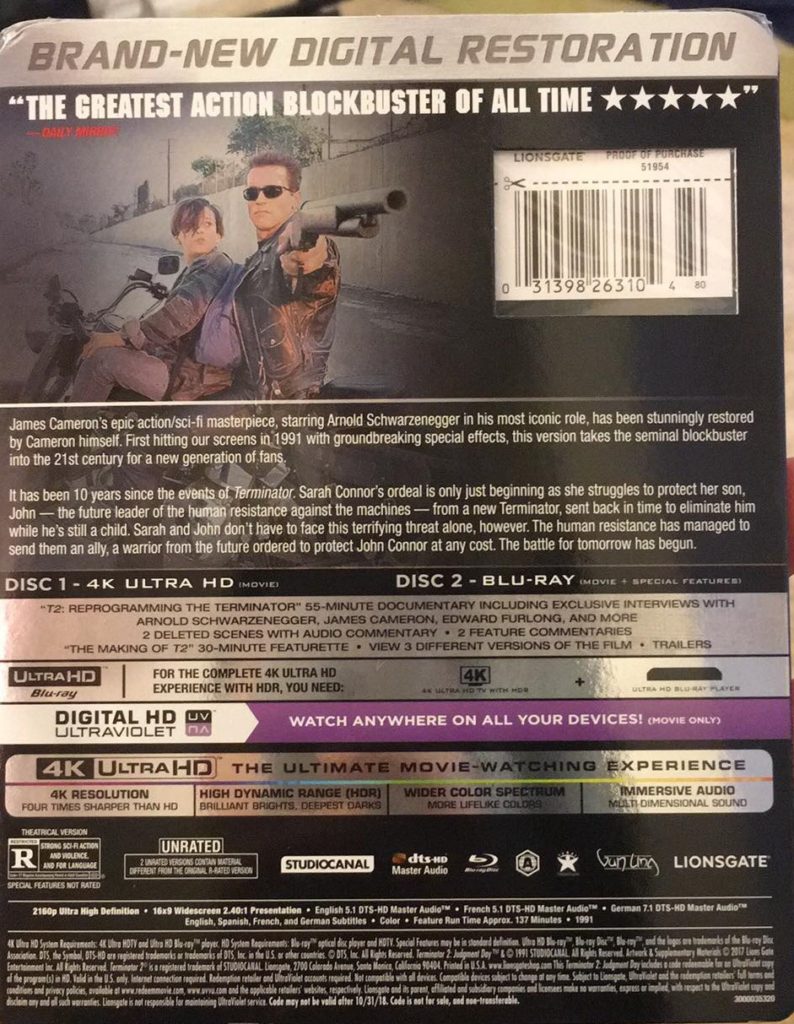 The Terminator 2: Judgment Day 4K Ultra HD Combo Pack, from Lionsgate Home Entertainment, presents the iconic film’s first-ever 4K scan. You can follow The Terminator, Sarah Connor, and John Connor on their action-filled mission to stop the destruction of humanity in all it’s high-detailed glory!

I was provided a review copy of Terminator 2: Judgment Day 4K Ultra HD Combo Pack from Lionsgate Home Entertainment. The opinions are my own.

The cinematic world got an amazing addition when Terminator 2: Judgment Day debuted back in 1991. Directed by James Cameron, who also co-wrote the screenplay with William Wisher, the film starring Arnold Schwarzenegger, Linda Hamilton, Robert Patrick, Joe Morton, Earl Boen and Edward Furlong went on to become a pop culture phenomenon. It’s also one of the few sequels that are better than the first film.

I’ve been looking forward to the release of the Terminator 2: Judgment Day 4K Ultra HD Combo Pack ever since it was announced. And I have to say that the video and audio presentation doesn’t disappoint. The 4K release is also accompanied by a Limited Collector’s Edition EndoArm box set.

The story is set ten years after The Terminator and we get to see John Connor (Edward Furlong) as a young boy. He’s the key to saving the human race from a future robot uprising and becomes the target of T-1000 (Robert Patrick) which is a shape-shifting Terminator from the future. However, to protect the young John Connor, the older John Connor from the future sends over T-800 (Arnold Schwarzenegger). Young John reunites with his mother (Linda Hamilton) and what follows is an action-packed adventure as John, Sarah, and T-800 try to stop Skynet.

You all need to watch this film if you haven’t already. There’s a reason it’s still considered as one of the best action/sci-fi films ever made. And while the acting isn’t the best, the characters are fleshed out quite well.

The 4K Ultra HD presentation is in 2160p Ultra High Definition 16×9 Widescreen (2.40:1). You’ll end up noticing a lot of detail during close-ups. From the stitching in the T-800’s leather jacket to each character’s hair and blemishes, there’s a lot of clear details for you to appreciate. There’s also a realistic glow given to metal objects and light fixtures. The 4K release does give this film a cinematic look on home entertainment systems. However, the visual detail falls short when the camera decides to show wider shots. While such a change is understandable, considering it’s a 4K scan of a decades-old film, some die-hard 4K viewers might not be very forgiving toward the inconsistent presentation.

The 4K Ultra HD Audio offers English and French DTS-HD Master Audio 5.1 and German DTS-HD Master Audio 7.1. There’s no fault in the enjoyable audio, as far as I can tell. The dialogue is clear and the soundtrack is highly enjoyable. The Blu-ray presentation is in 1080p High-Definition 16×9 Widescreen (2.40:1) with the same audio as the 4K presentation. You also get a redeemable Digital HD version.

Here are some spec details:

It’s all about upgrading your home entertainment systems for enjoying 4K releases and re-releases these days. So, it makes sense that you should go ahead and add the Terminator 2: Judgment Day 4K Ultra HD Combo Pack to your collection if you’re an action/sci-fi fan.

James Cameron, Arnold Schwarzenegger, and Linda Hamilton will be returning for another installment in the franchise. The upcoming film currently has a 2019 release date.

Previous:“Call Me By Your Name” Review: A Beautiful Film Which Sadly Follows The ‘Summer Romance’ Trope
Next: Boruto: Naruto Next Generations Manga Issue 19 Review – Puppets