Junjou Romantica 3×1 Review: All Good Things Must Come To An End 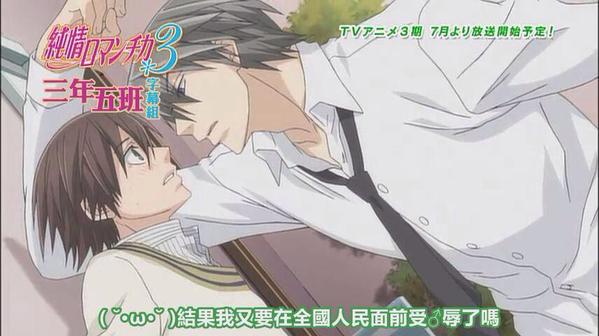 The last season of Junjou Romantica aired way back in 2008, so it’d be an understatement to say the fandom has been getting a bit antsy waiting for a new season.  If we were going to get anything new in this universe, though, I’d rather it have been a new season of Sekai-ichi Hatsukoi or maybe another Yokozawa Takafumi no Bai OVA.  Of everything that takes place in this shared anime universe, Junjou  is probably my least favorite, but alas, I am grateful that we got something and I’m looking forward to what this season brings.  Unfortunately the first episode of this long awaited season had all of the hallmarks that make this my least favorite show.  Mainly, I get really frustrated with Usagi’s possessiveness over Misaki and Misaki’s constant confusion over his own feelings towards Usagi.  They’ve been together for three years.  You’d think something would have changed in that time, but alas, these two signature aspects of their relationship are front and center as we head into the third season.

I very much adore Misaki as a character and, while Usagi grates on me, I can see how he can find happiness in the older author as a companion.  But that doesn’t mean I have to like the way Usagi attempts to squash any friendship outside of their relationship.  It’s downright infuriating.  During this week’s episode Misaki himself grew jealous and turned the tables on Usagi.  A part of me is glad that he at least attempted to keep things fair, but another part of me is screaming at the show ‘no this is not how relationships should be.’  Jealously should not be the focal point of a healthy relationship and the fact that Usagi encourages it and seems happy that Misaki is jealous just makes me even more upset.

And then we have the introducing of the cousin, which is the source of this jealously in the first place.  I almost don’t want to even start down this road because I can tell this character is going to be a source of frustration for the season.  I only hope some of the other pairings of the show have less frustrating plot lines because so far I’m not too thrilled with the direction it’s going for Usagi and Misaki.

So if I find this pairing so upsetting, why am I so damn excited for this new season? Why do I continue to watch?  I guess there’s still enough to love about it to keep me engaged.  As I mentioned, this is part of a much larger shared universe and I’m really hoping we get to see some crossover as we go forward.  I love it when the people of Marukawa publishing pop into the plot, especially Kirishima.  Despite its problems, I also really enjoy the Shinobu/Miyagi couple and hope to see more of them this season.  Have to admit, I’m not a fan of Hiroki/Nowaki, though, so if Usagi/Misaki doesn’t pick up soon I may be watching this show for only one (problematic, I know) pairing.  New anime in the BL genre is hard to come by, though, so I’m happy to have something.  Especially something in such a rich universe.  So despite my complaints, I’m happy to have this.