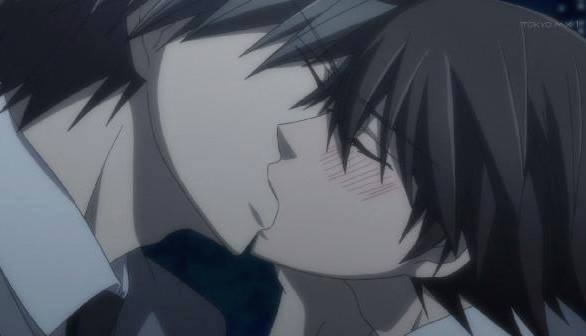 The latest episode fixed a lot of the issues that I had with the premiere.  I’m grateful for that because I don’t want to be watching only for the Miyagi/Shinobu episodes.  It was fixed in an unexpected way, though.  Usagi’s father, whom I had previously detested, seemed to knock some sense into him over the phone.  There were some bluntly delivered truth bombs about how fragile their relationship must be if Usagi can’t give Misaki some space.  Thank you, Usagi-chichi.  That’s what I’ve been shouting at my screen every time Usagi gets too possessive.  You may not be the horribly annoying character I thought you were after all!

One of the biggest reasons I love Misaki is his desire to make his own way in the world.  Sure, he’s dating an extremely wealthy best-selling novelist, but he wants to work and succeed on his own.  I can’t help but think that his jobs at Marukawa are in part due to nepotism, though, even if Misaki refuses to directly ride Usagi’s coat tails.  All it took was a phone call for him to get a part-time job in the editing department.  That’s way too easy. But still, now that Misaki is back at Marukawa chances are higher for crossovers with SekaKoi.  I haven’t read the manga in a long time so I honestly don’t remember how this segment of the story plays out, so any crossovers will be an absolute surprise to me.  Kirishima, where are you? I need you on my screen.  Thank you.

There are two Usami cousins in Usagi’s household, now, and I hope they distract each other enough to not take away from the maturing relationship between Usagi and Misaki.  I’ve grown fond of Kaoruko, though, so I hope her sharp tongue and strong will take the newcomer down a peg.  But really, what is it with the Usami family and cousin dating?  Forgive me if this is some sort of cultural thing I don’t understand, but are relationships between cousins of wealthy households common place in modern Japan?  Everyone just acts like it’s so normal and I’m just left scratching my head.  I may be an anime fan, but the nuances Japanese culture sometimes evade me.

I’m much more excited about the new season after watching this episode than I was about the premiere.  There’s signs of growth between them.  Despite Usagi’s stubbornness, it really feels like he’s maturing a bit.  And Misaki is being much more open about his feelings than he was before.  More of this, please.  This is the Misaki and Usagi that I love.

One thought on “Junjou Romantica 3×2 Review: Failing to Plan Is Planning to Fail”