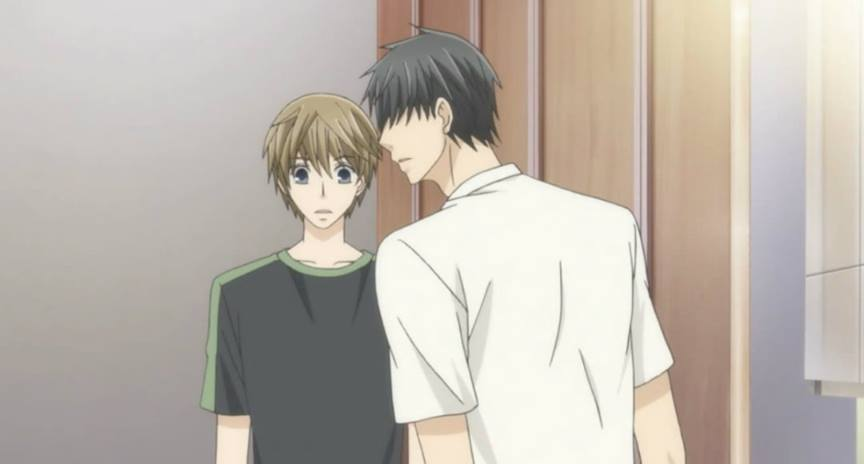 Finally! A Shinobu/Miyagi episode! I find it interesting that this pairing, which I was initially so weary of, has become the one I look forward to the most.  Despite the 17-year age difference and Shinobu’s childish temper tantrums, I feel like these two have the most open communication and understanding of each other’s feelings.  It’s remarkably sweet.

This week Shinobu seems to have a mini crisis about him and Miyagi not going on dates like an average couple would.  When pressed about it, Shinobu doesn’t really have anywhere he’d want to actually go on a date and it becomes obvious that he really just misses being around Miyagi.  Instead of dancing around this, though, and causing unneeded angst, Shinobu comes to this realization himself and says as much to a sick Miyagi.  This is the type of openness I find so refreshing about them.  It gives me hope for them as a couple.

Even more exciting still, the episode ends with Miyagi inviting Shinobu to move in with him.  I hope this isn’t the only Junjou Terrorist episode we get this season, because I really want to see how their dynamic shifts when they become a cohabiting couple.  Sadly, it looks like I’ll have to wait to see how that plays out because the very next episode shifted focus back to Junjou Romantica.

Even The Longest Journey Begins With A Single Step 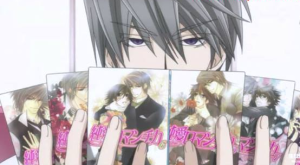 The thing I have been waiting for has happened!  Kirishima has made an appearance!  Praise to the yaoi Gods!  Praise them!  I knew that with Misaki working part time at Marukawa and applying to work there full time, chances were high that it might happen.  And bam, there we go.  The Chief Editor of the Shonen department is officially on Junjou Romantica.  We might not have any new seasons of Sekaiichi Hatsukoi and the Yokozawa Takafumi no Bai story may have just been an OVA, but by God we have a Kirishima.  There is a Deity of Yaoi and its watching over me, clearly.

Kirishima played a small role in the overall story of Misaki getting hired at Marukawa, though.  The overall arc was Misaki trying to get the job on his own merits, not by riding Usagi’s coattails or using connections there because of his part-time job.  The amazing part is that he succeeded, even when every other publisher rejected him.  I’m proud of our little Misaki.  Now if only Usagi would stop insulting him and pushing him when he says ‘no’ then I’d be completely happy with this couple.  Alas, nothing is perfect I suppose.

Misaki getting a job after college is a major turning point for both his character and the Junjou Romantica plot.  Four of the first five episodes of the season were Romantica focused, so perhaps we’ll get some more of the other couples too going forward.  If not, at the very least we should get an additional season.  Or, if the Yaoi Gods are still smiling sweetly upon me, another season of Sekaiichi Hatsukoi or another Yokozawa OVA.  Lords of BL, please be good to me.