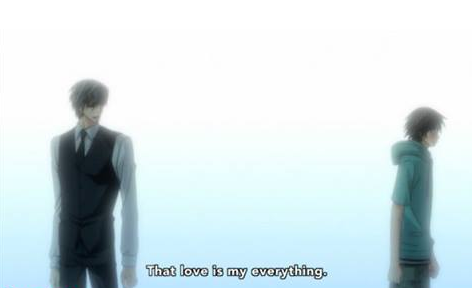 Dammit, Junjou Romantica.  Stop spinning your wheels here and get onto something interesting.  Every single episode this season with Misaki and Usagi features emotionally-constipated-Misaki and possessively-jealous-Usagi, followed by something moderately sweet that makes me think ‘well that wasn’t so bad.’  The fandom has been waiting for a new season since 2008, so we deserve something better than ‘not so bad.’  I think the biggest flaw is that these recycled narrative structures aren’t being broken up frequently enough by the secondary pairings.  We are six episodes into the new season, five of which have focused on Misaki and Usagi, while only one featured Junjou Terrorist.  The rehashed plotlines become glaringly obvious without something to spread them out a bit.  So I apologize, readers, but you’ll just have to stick with me until we get another Junjou Terrorist episode or, Christ, even a Junjou Egoist plot.  Or better yet, let’s just halt the season right here and launch into another season of Sekai Ichi Hatsukoi.  That’ll work nicely.

But no, that’s not the hand we’ve been dealt.  This week the cause of Usagi’s childish jealousy is how much attention Misaki is getting now that he’s been hired on by Murakawa Publishing.  He’s particularly ticked off by the close attention he’s getting from Ijuuin Sensei.  I’ve been so warped by yaoi at this point that I honestly can’t tell if Ijuuin has any sort of romantic or sexual feelings towards Misaki, but I can state with 100% certainty that Misaki’s feelings towards him are purely from a place of fanboyish glee.  For some reason everyone keeps falling head over heels in love with Misaki, but through it all Misaki has stuck by irrationally-possessive-and-frustratingly-jealous-Usagi.  Misaki could have had half a dozen extremely nice people who are just as wealthy and (apparently) attractive as Usagi, but that clearly didn’t happen.  Usagi, Misaki loves you.  Stop being such an entitled jerk about it.

I suppose considering Misaki’s recycled narrative arc, I can’t place all of the blame at Usagi’s feet (though I will certainly lay the majority of it there, of course).  Misaki just can’t communicate his feelings at all, even when simply explaining what’s going on would clear up everything right at the start.  I suppose this is supposed to be something we can relate to or something.  In fact, I feel like Misaki’s entire personality is supposed to be something we are supposed to be able to relate to, but it just misses to mark for me.  He’s of average intelligence, but works hard.  He’s caring, but has some major character flaws (this whole emotional constipation issue, for example).  Yet somehow people keep falling in love with him, including the super rich, generous, and (supposedly) handsome Usagi.  I… don’t relate to this at all.  Enough people do, though, or this wouldn’t be so wildly popular.  While SekaKoi has definitely surpassed it in terms of popularity,  I’d wager a guess that this is still at the very least top 10, if not top 5 for the yaoi genre in the English speaking fandom.

As is usual with these repetitive plots of Junjou Romantica, there was an emotionally touching conclusion to the plot that made me smile despite my frustrations.  Usagi shows Misaki his secret clearing in the forest.  Misaki instantly recognized it as something that had inspired some of his writing.  These moments make it seem like these two very different and very flawed people really do have a reason to be together.  I wish this feeling would last, because I know that it’ll fade and we’ll start over again from square one next time.  Why, god, why?  Stop spinning the wheel, Junjou Romantica.  Pull a Daenerys Targaryen and break this damn wheel.  You can be so much more interesting.  I know you can.