Kept Boy – Review: The Complexities of Living With a Sugar Daddy 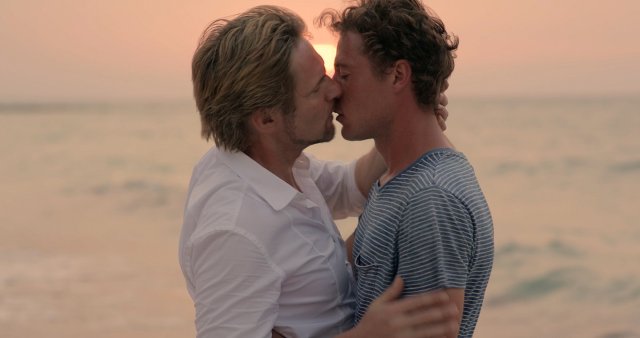 While the premise of Kept Boy is interesting and the cast does a great job, there were times I felt it could have been a lot better.

I was provided a screener for Kept Boy by Breaking Glass Pictures. The opinions are my own.

The main character of Kept Boy is Dennis Racine (played amazingly by Jon Paul Phillips). While Dennis has lived as a kept boy for years, growing older starts to make him feel that he’s drifting away from his wealthy boyfriend Farleigh Knock (Thure Riefenstein).

When Farleigh’s career on reality TV experiences trouble, Dennis is asked to find a job to support himself. Dennis has never had a real job or a college education so it’s fun to see his life changing around him. Matters are made worse when Farleigh shows interest in a young interior designer named Jasper (Greg Audino).

Dennis and Jasper immediately butt heads and there are some nice comedic moments where Dennis starts acting out because he thinks Farleigh will soon be replacing him.

Kept Boy is based on a book of the same name by Robert Rodi. It gives us a glimpse into the life of individuals who hook up with older wealthier people to find stability. Even Dennis’ friends are the same as him. We have Lonnie (John-Michael Carlton) who lives with an older woman, and Paulette (Toni Romano-Cohen) who is trying to maintain a relationship with an older man.

While the film does let us know what Paulette and Lonnie have been up to, it doesn’t focus a lot on the complexities that come with having a sugar daddy or a sugar mama. The scenes that Dennis shares with his friends are one of the best in the film and I would have liked to see more.

Most of the film’s runtime is spent on Dennis trying to maintain whatever life he thinks he has. I get that Dennis doesn’t want to leave his boyfriend but the fact that Farleigh gave a lot of attention to Jasper made me want to knock some sense into Dennis. He spent the entirety of the film trying to win Farleigh back and nothing worked.

The actors do a great job but I couldn’t find myself feeling invested in Farleigh and Dennis’ relationship. I don’t even know why Dennis loved Farleigh in the first place. Also, the unraveling of the mystery surrounding Jasper and how the characters connected felt a bit too convenient.

Anyway, having said that, Kept Boy is an enjoyable movie. It has its comedic moments but you can tell that the life Dennis finds himself living isn’t a happy one. The character is struggling with a lot of emotion and Jon Paul Phillips is able to convey it impressively in front of the camera. Also, the ending does hint at a better life for Dennis, one where he can be his own person.

You should watch Kept Boy for some good acting, steamy scenes, and to get an idea of how easy it is to be replaced when living a sugar daddy-centric life.

Kept Boy was directed by George Bamber. It was written by David Ozanich. It was released today in the US by Breaking Glass Pictures on VOD and DVD.

Have you watched Kept Boy? What did you think? Let us know.

Previous:Talking to ‘Kidnap’ Actress Chris McGinn About Her Acting Experience and More!
Next: Batman: The Telltale Series “The Enemy Within” Episode 1 “The Enigma” Review