The Gifted at SDCC 2017: The New Mutants Are Here

There’s a new generation of mutants coming to TV this fall, and we were able to get an introduction to The Gifted at SDCC 2017. This new series takes place in the X-Men universe but shows a whole different side to the comic book favorite. Not only does The Gifted promise to be a new take on mutants, but also it will give us a look inside the dynamics of family, both traditional and found. 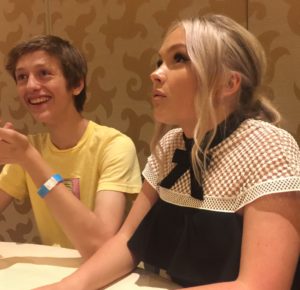 ted is a new television series coming to Fox this fall. It will premiere on October 2 for a limited 10-episode season, and features Stephen Moyer and Amy Acker as parents who discover that both of their children have mutant abilities. The twist in this, though, is that Moyer’s character is an attorney tasked with prosecuting mutants. Obviously, this discovery that his own children are mutants throws everything that he knows on its head, and his family flees. It is during this tumultuous time that the family hooks up with a community of mutants in hiding…a sort of underground railroad if you will.

This underground community is meant to be a metaphor for those who are considered different within our own modern society, but fortunately we get to see actual, fleshed-out portrayals of actual X-Men characters in the series including Eclipse (Sean Teale), Blink (Jamie Chung), Polaris (Emma Dumont), and Thunderbird (B

lair Redford). Natalie Alyn Lind and Percy Hynes White round out the cast as the Strucker children.

This is obviously a huge risk for Fox as they’re adding to their X-Men universe franchise, what with the success of Legion on FX. Since The Gifted will be on network TV, we can expect some great visual effects, but all of it will come with that “family” message. Here are the videos from the SDCC press room roundtables, which can also be found on our YouTube channel:

Overall, The Gifted at SDCC 2017 was quite a pleasure. It is a show that I am looking forward to, now even more after getting a chance to talk to the cast. What do you think about The Gifted? Will you be tuning in this fall?