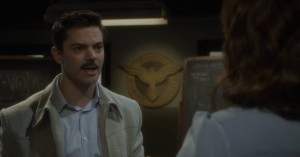 The season finale of Agent Carter made me cry. I’m woman enough to admit it. I don’t cry often, but damn. I feel I should preface my review with this before I begin, just as a warning. Whenever they drag out the memory of Steve for Peggy it is sure to make even the toughest guy fall apart, but then you add Howard Stark and his regret into the mix… Seriously, Marvel, what are you trying to do to us?! It’s bad enough that we have her loss. Now we know Howard’s biggest regret (at least up until that point in his life) was failing Cap. I think it gives a lot more power to the Tony Stark / Steve Rogers dynamic in the present as well. I wonder if we are going to see more of that in Captain America: Civil War. Also, when Fenhoff said, “The Great Howard Stark”… did anyone else get Iron Man chills? I know I did. Marvel is so good at that. 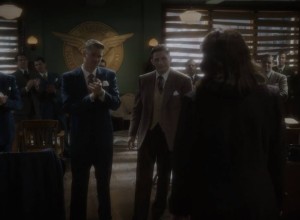 Another point I really want mention is Sousa. I get it, he’s a nice guy and everything, but to me the relationship with Peggy that they are showing us seems forced. I don’t want them together, I’m sorry. It just seems awkward, and not in a good way. It has nothing to do with the actors or the writing, I just don’t see it. I’m not a constant shipper, I don’t do it for every show I watch, but I don’t want Peggy with anyone at the moment. Maybe in Season 2 they can introduce someone new, but yeah, not Sousa. I’d maybe give you Thompson, as I’m a fan of that dynamic. And Jarvis? That’s my BROTP. Howard and Peggy are also my BROTP, but to a lesser extent. I did like their back and forth together. It reminded me of pre-relationship Tony and Pepper. Yes, there are a number of nods to the first Iron Man film in this episode… hmmm. 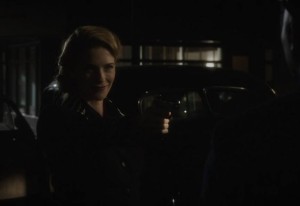 In the end, the Leviathan as the big bad villain was slightly underwhelming. Johann Fennhoff / Doctor Ivchenko was kind of cool, but I guess I was expecting more. I did love the early incarnation of Black Widow (Dorothy “Dottie” Underwood / Ida Emke), and I felt she was the real villainous star. The way that Bridget Regan could switch between sweet and sinister was amazing. Seriously, she was awesome and I hope we get to see more of her. I also loved (like I’m sure everyone else did) the cameo of Arnim Zola. It’s the beginning of HYDRA. That made me happy, though I’m SHIELD all the way.

Ultimately, I think this was a really good first season for Agent Carter. I think that some of the story was self-contained, but there is a lot more to be explored. I also really want to see what is going to happen with Angie, and hope she stays a non-com. On the whole, the cast has done a superb job this season. I’m really looking forward to seeing more from Atwell, D’Arcy, and Murray especially.

Additionally, I can see why some people are hesitant about a second season, but I think that’s a bit silly. My mom, who has never seen an MCU movie in her life (no matter how hard I’ve tried), watched an episode of Agent Carter, purely because I told her that it took place in the 1940s. She loved it. I don’t think Marvel failed. Each MCU movie and television series has both good and bad points to it, but I think the more important thing is that they got made. Fanboys and fangirls waited decades for their favorites to finally have their day on screen, and Marvel has made that happen and then some. Doing what was promised is never a failure. Yes, some people will have different tastes, but as long as more gets added to the MCU, I’ll watch it. Same goes for Agent Carter Season 2.

Previous:Meet Me At My Webcam: Gay Characters on ‘The Walking Dead’
Next: Serial Fiction: Ash & Flame, Episode 1 Review