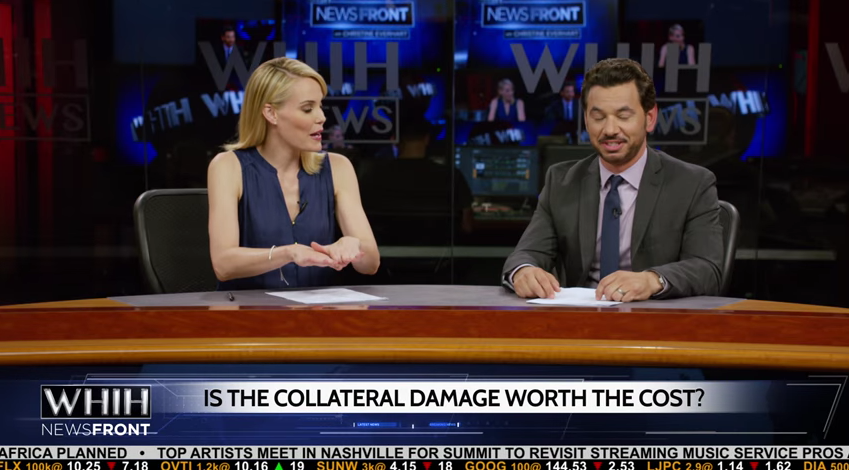 WHIH NewsFront, Marvel’s fake news channel’s youtube, first appeared during promotions for Ant-Man now it’s back to remind audiences of the issue at the heart of Captain America: Civil War.

The Youtube channel features Christine Everhart (Leslie Bibb), seen in Iron Man 1 and Iron Man 2, who investigates and interviews the superheroes of the Marvel Cinematic Universe. In the latest she catches the audience on everything that happened in Captain America: The Winter Soldier and Avengers: Age of Ultron. Including the fall of Hydra and that one time Ultron levitated a whole country in Sokovia.

After catching the audience up on what’s on everything that’s been happening in the Marvel Cinematic Universe Everhart is joined by political correspondent Will Adams (Al Madrigal – a former correspondent for The Daily Show) to discuss whether or not superheros should be regulated. Christine Everhart is very much pro registration and  Will Adams thinks that superheroes are helping people so we should just let them be. They’re basically outlining the two opposing sides of the Civil War.

They also paint Natasha Romanov (Scarlett Johansson) as the hero of Captain America: The Winter Soldier, which is the total truth there. She’s the one that brought down Hydra in the end, revealing her secrets as well as everyone else’s. She also reveals A LOT of corruption, which is also very cool.

The questions at the heart of Captain America: Civil War are pretty interesting. I mean what is the cost of The Avengers? And who pays that cost? Should they answer to someone? Although let’s face it, the real cause of the Civil War is probably that someone wants to hurt Bucky and Steve is just not going to let that happen. That might just be wishful thinking on my part but a girl can dream.