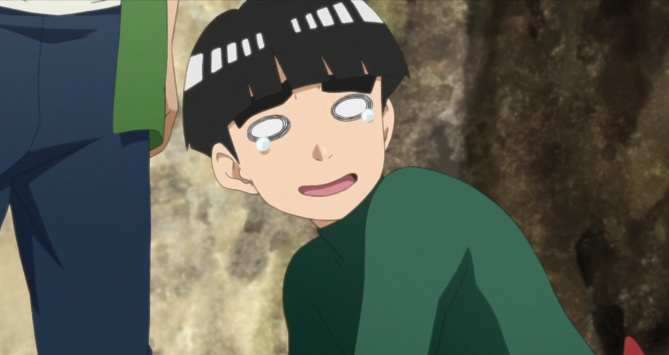 This week’s episode of Boruto, titled “Metal Lee Goes Wild”, shone some light on Rock Lee’s son and what he’s struggling with.

While I still don’t think that the current Boruto anime is to be considered canon, it’s fun to know a bit more about the supporting characters. After watching “Metal Lee Goes Wild”, I wouldn’t mind seeing more of him hanging around with Boruto and his friends.

Even though Rock Lee was confident in his skills, his son Metal Lee tends to perform badly when feeling nervous. I don’t know when he’ll be able to overcome this hurdle, but I do think Boruto and the rest will help him out.

“Metal Lee Goes Wild” also continued the mysterious threat that was responsible for making Denki seek revenge. The episode did show a shadowy figure in the beginning but I’m still not sure who or what it’s supposed to be. However, the shadowy being does seem to have the power to influence people by feeding off their insecurities. It made Denki take revenge on the kids who bullied him and this week it made Metal attack Shikadai for belittling his skills.

While the fight scene was short, it was still enjoyable. I greatly enjoyed Shikadi deciding to run away and then coming up with a plan. The fight also served as a little lesson for Boruto to fight as a team and not charge in headfirst to attack a powerful opponent.

“Metal Lee Goes Wild” also showed Boruto’s weird eye ability again. I’m really looking forward to an explanation and what his eye can do. So, let’s see if the anime tells us first or the monthly manga.

I missed Salad in this episode. I know she and Boruto aren’t yet friends, but it’s fun to have her around even if she doesn’t get much dialogue.

With Temari showing up in this episode, I hope the rest of the adults including Sakura, Naruto, Kiba, etc. visit the Ninja Academy to teach the students different skills. Sakura can teach them about chakra control, Tenten can talk about various ninja weapons, and so on.

Did you watch “Metal Lee Goes Wild” this week? What did you think? Who’s Lee’s mother? Let us know.