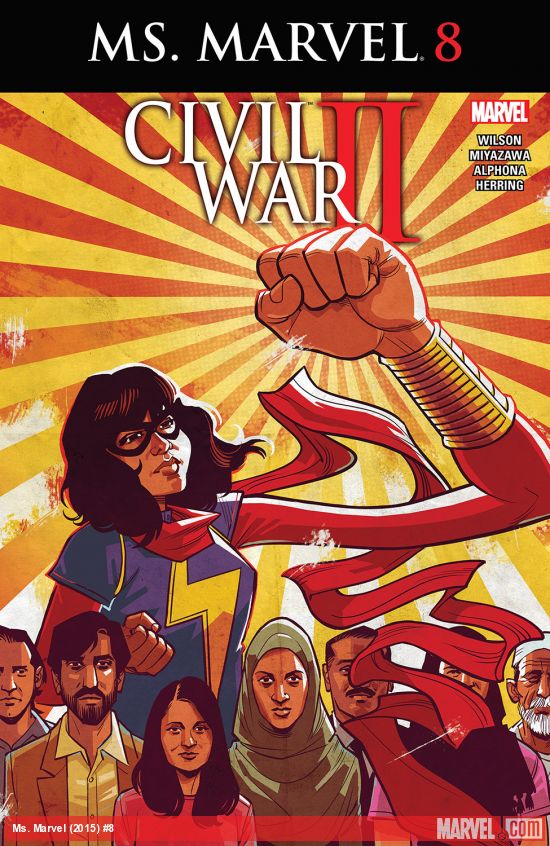 The Ms. Marvel tie-in to the major Civil War II event is something I have been waiting for months to read, and Issue 8 in the series didn’t disappoint!

Captain Marvel is Kamala Khan’s idol, but that might change because of Civil War II. When asked to do a job for Carol Danvers, our young superhero is unable to contain her excitement. However, as the story progresses, you see cracks begin to form in the relationship these two female heroes share.

What does a young superhero do when they don’t agree with the decisions of the person they look up to? That is what the current tie-in hopes to answer. I can’t wait for Kamala to confront Carol about what she thinks of Ulysses’ powers being used to stop crimes before they even occur.

One of things that I liked about the Ms. Marvel tie-in is that G. Willow Wilson kept it small. Kamala isn’t on some globe-trotting adventure. Her story still takes place in Jersey City, and that helps in maintaining the unique voice of the series that fans love.

The issue also opened with a flashback from 1947 when Pakistan was forming into a separate country. The flashback is shown through Kamala’s great-grandmother’s eyes, and it talks about the real civil war that occurred during that time. I really enjoyed the small look into Kamala’s family history and I want more!

Both Adrian Alphona and Takeshi Miyazawa serve as the artists for this issue. Their art styles really complement each other. It took me a while to figure out which panels were drawn by which artist.

The confusion that Kamala Khan begins to feel is more or less triggered by her sister-in-law. Tyesha talked about some good points during their little conversation. She tried to make Kamala realize that if people are stopped from doing crimes they haven’t even committed yet, then the world will have to redefine the term crime.

Everything comes close to crashing around Kamala when near the end of the issue 8 she realizes that the next person she has to apprehend before a crime is committed is someone she knows. I can’t wait to see how the story progresses and what lessons Ms. Marvel learns from Civil War II.

Did you read Ms. Marvel Issue 8? What did you think? Let us know!

Previous:And Con of Thrones Makes Three! The Newest Game of Thrones Convention
Next: Flame Con Alters Cosplay Policy Out of Respect for Orlando