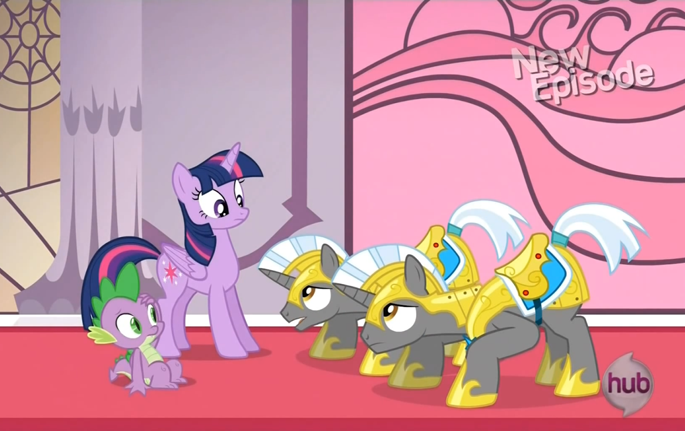 The long awaited My Little Pony: Friendship is Magic season 4 was absolutely worth the wait! Season 3 was achingly short, and the feature length My Little Pony: Equestia Girls (aka “A-quest” for More Money) was subpar. But this two-part episode was a breath of fresh air which relieved much of the worry that was created after season 3’s royally shocking ending.

Let’s start at what I didn’t like about the episode:

Some of the dialogue seemed out of place or forced. The discussion between Twilight and the guards after Celestia and Luna disappeared just seemed overly dramatic.

Secondly, even though I loved seeing the return of Discord (Best Villain), especially his priceless maid outfit. Hearing John De Lancie’s voice once again was a breath of fresh air, though I did have a few issues with how he was portrayed. Even though he was supposedly redeemed in the previous season, he seemed borderline antagonist. I know he’s supposed to be a prankster, but all he did was prod the Mane Six without much productive purpose. He did, in a way, help Twilight rejoin her friends. But I just feel he could’ve gone about it in a different way.

The first thing that caught my attention was the new art-style, which had a noticeable higher quality to it and some nice shading effects that weren’t there before. The new tweaks to the animation really made some of the scenes really stand out. MLP: FiM has always been lauded for its great animation, but it wasn’t the most important aspect of making it a good series. The extra attention to detail this season is a nice touch.

Something else I really enjoyed was the handling of the most controversial princess in Equestria, Princess Twilight Sparkle. Everyone who watched the show was worried that her new status as royalty would change her personality. In fact, the plot of these two episode was built around that worry; which was shared not only by the viewers, but also by the characters of the show. Despite these fears, however, Twilight is still the pony we know and love. She’s still our neurotic adorkable pony. The moral of the episode was that just because a person’s status or position in life changes, it doesn’t mean that person will change; so long as that person (or pony) is true to themselves and their friends are supportive.

Finally there was the main plot of the episode: the disappearance of the princesses of the diarchy and the appearance of the weeds, Discord’s former backup plan if the Princesses succeeded in turning him into stone. The plan failed, of course. But nonetheless, it was just pure evil-genius on Discord’s part.

It was also interesting to see a season opening that didn’t have a “bad guy” like the previous openings with Nightmare Moon, Discord, or Chrysalis. It was well done, and the weeds were foreboding enough.

The episodes introduced several scenes of Equestria’s past, which were previously mentioned in the show never shown. The scene of the downfall and transformation of Princess Luna into Nightmare Moon, which I’ve been looking forward to since Hasbro released the preview earlier this year; the fight scene between Luna and Celestia, which was simply spectacular; the discovery of the Elements of Harmony, which ruined many a headcanon; and the defeat of Discord. A little history and world building is never a bad thing.

The episode even had two fight scenes. The first was between Nightmare Moon and Celestia, and the second was between Mane Six and some gas spewing plants. The fight with the plants was mostly comedic, but addition of combat magic to the show (because come on, lasers!) was a great improvement.

But the most awesome part of these episodes, in my opinion, was the introduction of the box with six keys. This has a potential of becoming the spanning plot of the season. The closest thing we’ve had to such a plot-arc was in season 1 with the Grand Galloping Gala, which reached its resolution in only three episodes. I think it will be interesting to see what the ponies do with the collection of the keys.

Overall, the episode promises the new season to be great. It left a lot of opening for the development of the characters, introduced the higher quality animation, and an open field of possibilities for the plot.