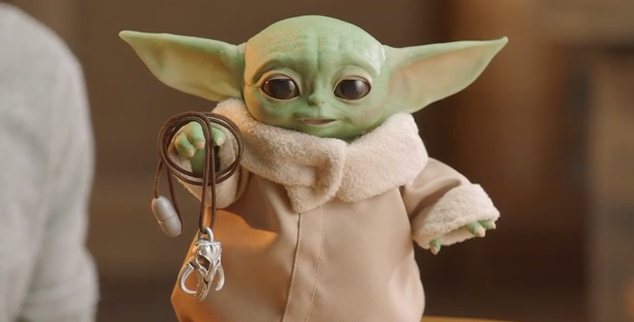 The new Baby Yoda Hasbro toy is a delightful little animatronic version of the child, which comes with a Mythosaur pendant. It’s absolutely adorable.

To the surprise of almost everyone that’s been following Baby Yoda merch news, this new Hasbro toy is only $60. This seems like a remarkably good deal considering some stuff, such as the Sideshow figure announced a few weeks ago, are several hundred dollar each. I predict this will be a more popular toy option due to its affordability. You’ll be getting pretty good bang for your buck with this one.

He sleeps. He blinks. He uses the Force. And he steals your heart.

Oh my gosh. This is absolutely adorable on many levels. The movements look fairly smooth and the doll itself seems really detailed.

And honestly, the necklace is a pretty good bonus for the product as well. I’d probably personally steal that from the poor child and wear it myself. And then I’ll promptly be hunted down by Nanny IG-11 and killed for stealing from the kid, but you know, totally worth it. That necklace is awesome. Give it to me now.

He may look like “Baby Yoda,” but this lovable creature is called The Child — and now you can become his protector with this animatronic toy from Star Wars: The Mandalorian. Touching the top of The Child Animatronic Edition’s head activates over 25 sound and motion combinations, including happy and excited sounds, giggles, babbles, and more, all while the figure’s head moves up and down, ears move back and forth, and eyes open and close.

Magic in the details

It should be noted that this toy isn’t suitable for little kids under three years old due to a choking hazard. But just get your geeky babies this plushie instead. The whole family deserves some Baby Yoda goodness, even if the little ones have to miss out on this particular toy.

The Hasbro toy is available for pre-order with estimated delivery on December 21, 2020. So, it’s just in time for next Christmas! Awesome. Get your Christmas shopping done ten months in advance because why the heck not! We were all bummed we missed out on the merch this year so we’re making up for lost time here.

But word on the street (or rather, according to Gizmodo) says it should be available in most major retailers “in the fall.” You might be able to get it earlier in person. But ‘the fall’ is vague. Technically December 21, 2020, is the last day of fall, so who knows, man.

This is the second set of Hasbro toys we’ve included on our list.

The first set of adorable Hasbro figures was discussed back in December when the show as still airing. Those ones should be out in late May.

We’ll be keeping track of all the major merch releases over on our main Baby Yoda Toys post. You’ll find major merchandise announcements at the bottom of the page. For more casual merchandise updates, give us a follow on Instagram. With the upcoming Toy Fair, I’m sure we’ll have some updates to post over there that might not get a full article!