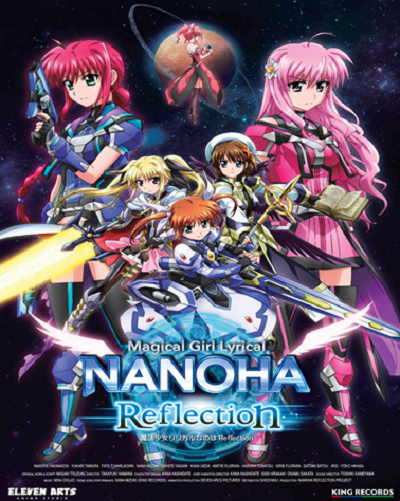 Magical Girl Lyrical Nanoha premiered back in 2004. The popular anime ran for 13 episodes and since then has a had a number of new anime series in the franchise as well as animated films. Fans can revisit the franchise when Magical Girl Lyrical Nanoha Reflection will be shown in US theaters on February 9, 2018, by Eleven Arts Anime Studio. The animated film will be shown with the original Japanese dialogue and English subtitles.

The story opens on Eltoria, a planet quietly dying from ecological devastation. The Florian family, consisting of a researcher couple and their two daughters, Amitie and Kyrie, stays on the planet in the hopes of restoring it. However, the father (Grants Florian) collapses from an illness, and the family’s dream crumbles. Meanwhile, Kyrie endeavors to save her father and revive the planet, which means she must travel to a “different world, far away.” Amitie tries to stop her, but Kyrie ignores her sister’s warning and embarks on the journey with her best friend Iris.
Their destination is Japan, a small island country on the planet known as “Earth.” Kirie and Iris, looking for the key to revive their planet, visit three girls from Japan. They are: Nanoha Takamachi, Fate Testarossa, and Hayate Yagami. Their encounter will be linked to the battle, which will decide the fate of the two worlds and all who inhabit them.

Check out the action-packed trailer!

For more information, including showtimes and tickets, you can visit the official website.

Some previous films from Eleven Arts Anime Studio include The Last: Naruto The Movie, Boruto: Naruto the Movie, Sword Art Online The Movie: Ordinal Scale, and A Silent Voice.

Previous:Jumanji: Welcome to the Jungle Has Got Fun and Games
Next: Vikings 5×05 Review: The Prisoner