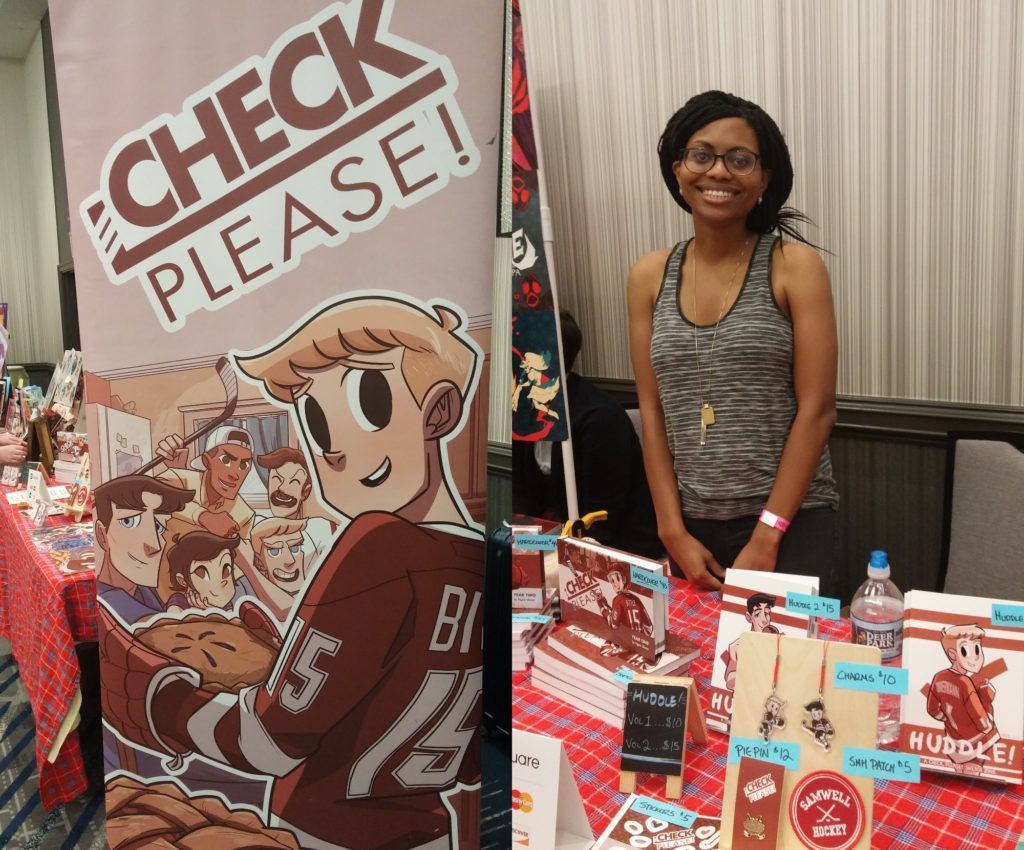 If you’ve been around a while, you guys know I’m a fan of Check, Please!, the webcomic about a gay southern baker who navigates life and love on his college hockey team. Last month at Flame Con, I was fortunate enough to sit down with creator Ngozi Ukazu to talk about how she started, what drew her to Tumblr, and what we can expect from her in the future.

We also talked a lot about anime – seriously, I had to cut almost ten minutes from this transcript because we got off topic talking about Haikyuu (Ngozi did a Haikyuu zine in college and that kind of makes my year) – but since she just did a panel at a convention about writing sports comics, some of that conversation made its way in. (You’ll be shocked by the topic. Shocked! Well, not that shocked.)

THE GEEKIARY: First of all, allow me to congratulate you on your book deal.

NGOZI UKAZU: Thank you so much!

THE GEEKIARY: It’s a big deal, so how did that come about? Were you shopping it around, or were you approached?

NGOZI: Fortunately, I was approached. I was talking with my manager about moving the book from self-publishing to actually getting it in bookstores, and we had a few offers, and :01 was by far the best. They were really enthusiastic. And :01 is on the up and up. I think they were established about ten or fifteen years ago, and now they’re heavy hitters.

THE GEEKIARY: You did an interview with Entertainment Weekly about the book, and you mentioned that there would be stuff in that edition that wouldn’t be in any of the others. Can you tease a little bit? Is it stuff that you already have done or that you’ll be creating?

NGOZI: We’ll be adding some aspects of the tweets that Bitty did and we might be formatting them differently — or adding a little extra. We hope to squeeze some of the multi-platform story-telling in there.

THE GEEKIARY: That’s actually a really good idea. It’s really hard sometimes to match up the –

NGOZI: Oh, it’s all over the place. As much as I love multi-platform storytelling slash transmedia storytelling… As fun, as disparate as it is, and how fun the disparate-ness makes it, it’s hard to compile everything.

THE GEEKIARY: I do want to talk a little bit about the idea, about how you came up with Check, Please in the first place. You’re a hockey fan, right?

NGOZI: Senior year of college, I got really into hockey because I took a screenplay writing class. The script that I wrote was this hockey story where a tough guy senior in his last year of college falls in love with his best friend—a dude. This tough guy also has a girlfriend. So it’s very much like, “Uh oh, how are you gonna work that out.” I had to do a ton of research on hockey, so I did hours of interviews and I checked out books and I watched documentaries and I went to the hockey games. When I graduated, I had all this leftover hockey knowledge and had become a genuine hockey fan. But then, the story was also so dark, that I was ready to do something completely different. When I started Check, Please it was a) to practice storytelling and making comics, b) to use all that leftover hockey knowledge and c) just to tell a fun, light-hearted story. And that’s how I fell into the comic.

THE GEEKIARY: What made you settle on Tumblr as a platform originally instead of setting up a website?

NGOZI: How to put Check, Please out there was not something I was really thinking about when I started the comic. When I originally began, it was on my personal Tumblr blog, and it was just something that I wanted throw out there. Then I realized I should compile the comics into their own place, and then suddenly Tumblr became Check Please‘s first home. I’m lucky in a lot of ways, because I reaped all the benefits of Tumblr. Content was very easy to share. When people reblog a comic, it’s like they’re endorsing it.

THE GEEKIARY: So, as an aside, do you watch Yuri on Ice?

NGOZI: I remember seeing previews of it in, like, 2015, and I was like, “Ice skating? Cool.” It seemed interesting, and the animation seemed fun, but when they actually got to the show…Then we got all the added humor, all the bright characters. Characters like Makkachin this crazy-looking dog. And all this other fun stuff became part of the story, and… I don’t even know if you want to include this.

THE GEEKIARY: We’re really big fans of Yuri on Ice on our blog.

NGOZI: The thing with Yuri on Ice is that it came at a crucial time – after the election, where we were all kind of in this mass grieving delusional state and we just needed something that was pure and happy and fun. As much as I love anime, as much as I love fandom, I don’t think I latched on to an anime that hard in years. I’m a big fan.

THE GEEKIARY: I need to talk about the Kickstarter, because that was huge. It probably broke records.

NGOZI: Right now, the cool think I am proud of is that Check, Please is the fifth-largest earning comics Kickstarter ever, and it’s one of the youngest comics up there. The people who are “ahead” are like you know, Penny Arcade and Ctrl+Alt+Del, comics that have been around for up to or over ten years. I’m proud of that, and also I think it’s inspiring that comics are changing and they’re changing fast. There’s readerships that want different stories, and they want them now. If Check, Please‘s success helps anybody pay attention to the changing tides in comics, then I am all for it.

THE GEEKIARY: What is your reaction when you see it blow up like this? How do you even comprehend that?

NGOZI: It’s crazy. Because you post something, and you see the notes, and you’re like, “Okay, that’s a thousand numbers, I guess.” Then suddenly you’re at a convention and people are saying, “I love the comic and I read it”; it’s weird to see those numbers actualize into people. I still am wrapping my head around it. The great part about working in comics, though, is it’s only at conventions like this where you feel like it’s a big deal. Most of the time-

THE GEEKIARY: You don’t get recognized on the street.

THE GEEKIARY: You had mentioned in an interview that your upcoming project is softball related.

THE GEEKIARY: Can you talk about that at all?

NGOZI: It’s going to be a pretty casual thing. Me and a friend – Madeline Rupert who makes a webcomic called Sakana – have been wanting to work on a project together for years. I’m writing the script and she’s doing the art, and hopefully we’ll get to start pages soon, because I’m so far into the script that like-

THE GEEKIARY: This better get done.

THE GEEKIARY: Did you play softball, or are you a softball fan?

NGOZI: It’s funny, because I didn’t play hockey, I don’t bake, I didn’t play softball, but I am just a general sports fan. The softball story that we’re working on is about a girl at art school who has to win one game of softball so that she and her team can get an athletic scholarship. I’m pretty excited for it.

THE GEEKIARY: It sounds cool. I did play softball, so I’m excited for that.

NGOZI: Mad played travel softball for ten years, so she is our softball expert.

THE GEEKIARY: I played in high school, and we were…not good. So the having to win a game thing, I was like, “That sounds a lot like us!” because we didn’t win anything until I was a sophomore. It was bad. And then we only won one game.

NGOZI: The stakes are high.

THE GEEKIARY: So what do you have coming up in the realm of appearances? Because I know you’re at New York Comic Con, which I’m excited about.

THE GEEKIARY: Do you ever have plans to appear on any panels?

NGOZI: I’m not doing any panels that I know of for this one or SPX or New York Comic Con. Staple is local and I’m a guest, so I was asked to do a panel.

[Author’s Note: Ngozi was recently added to the NYCC schedule. Her panel “Talking About Tough Topics in YA Comics” is scheduled for 9:30am October 5 at the New York Public Library.]

THE GEEKIARY: What’s your panel about at Staple?

NGOZI: Half of it will be on how to start a webcomic and the other half will be on writing sports comics. Like how to approach writing about sports in a way that is accessible, and how basically any time you write about sports, you’re kind of doing a critique on a certain, really regimented aspect of culture. I’m trying to convince people that sports may not inherently be inclusive to some people, but they can be a really good arena to discuss other issues in society.

THE GEEKIARY: Yeah, like in Yuri on Ice, it’s brought up like he has anxiety and he has body image issues, and lots of people have those, so it’s a really good thing to talk about.

NGOZI: One thing that I love about sports, because I am a big sports fan, and I have loved sports forever, is how athletics and sports have so many intersections with issues of what is masculine and what is feminine, what is sexuality, socioeconomic intersections, historical intersections… When you talk about the history of the Olympics, you can’t forget people like Jesse Owens. There’s a myriad of things that I think are really neat. I could talk about sports for a while.

I’d like to again thank Ngozi for taking the time out of her convention prep to talk to me (even if she was totally judgmental about my Oikawa lock screen!).

If you’ve not yet read Check, Please!, now is the perfect time to start! Bitty’s junior year is wrapping up, so think of all that you can read without stopping! You can read the comic and all the assorted extras at the main site, though I still prefer reading at the Tumblr.

Previous:American Assassin Is Definitely A Movie
Next: ‘Atomic Blonde’ Releasing on 4K Ultra HD, Blu-ray, and DVD on November 14, 2017!