As soon as I learned that Dylan O’Brien was cast in American Assassin, there was no chance I wasn’t going to see this movie. I have seen everything Dylan has done (except the last few seasons of Teen Wolf), and I would pay decent money to sit and watch him breathe on the big screen for two hours. Dylan is by far the best thing about this movie. Mitch Rapp as a character is a typical, generic action “hero” – he’s kind of an asshole, he’s sarcastic, and he plays by his own rules but he gets results, damnit. Dylan’s previous roles have prepared him well for that, and no one does snark like him, but I think fans of his will be delighted by how well the action hero mantle suits him. He shines in this in a way he hasn’t been able to in Teen Wolf or The Maze Runner, because Stiles and Thomas are not trained the way that Mitch is. I am shallow enough to admit that he looked damn fine during this movie. I am one hundred percent here for Dylan competently firing a gun and taking down multiple assailants. Yes, please. Sign me up for an entire franchise of that.

Aside from Dylan and Michael Keaton, who puts in a stellar performance as Mitch’s mentor Stan, the rest of the cast is average. Nearly everyone delivers their lines in the same emotionless deadpan that seems to be required in action movies (except Taylor Kitsch, whose character is heavily implied to be crazy), and the dialogue was nothing to write home about. Mitch had some good one-liners, as the protagonist in an action film always must, but for the most part the writing was not that great. 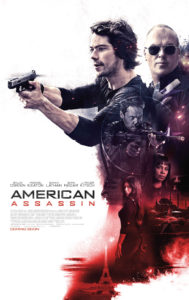 The two female main characters – Irene (Sanaa Lathan) and Annika (Shiva Negar) – are sufficiently badass but otherwise light on development. I actually really enjoyed Annika as a character; she had an emotional backstory and was allowed the opportunity to be vulnerable, but I feel like they underutilized her. Irene, as the tough-as-nails assistant director of the CIA, mostly just walked around looking fabulous and glaring at people. Then there was Katrina, whose only purpose is to die. Mitch’s fiancée, her death in a massive terror attack while they’re on vacation opens the film and launches the entire plot. The worst, though, was the unnamed mistress of one of the villains, who’s killed so casually I was kind of grossed out by it, and she spends her entire scene pretty much naked.

Speaking of grossed out, there is a torture scene near the end of the movie that I had to watch through my fingers.

There were some concerns that American Assassin would come across as Islamophobic. The terrorists at the beginning of the movie – the ones who kill Katrina – are part of an Islamist cell. And though the main antagonist – “Ghost” (Kitsch) – is American, everyone working with him is Muslim. Farid is probably better equipped than I to answer this question, but I felt that they were walking a fine line. It could have been better, but it could have been much worse.

What was great about this movie were the action scenes, which is good, because this is an action movie. The fights are well-choreographed, visceral and real in a way that a lot of fight scenes aren’t. And while there are sadly no thrilling car chases, there are a couple of scenes where Mitch steals a car and drives like a maniac through crowded city streets. The climax of the film features Mitch and Ghost fighting on a speeding boat, and every time the boat hits a wave, they go flying.

This has the potential to be a franchise along the lines of the Jason Bourne movies, and if they spruce up the dialogue a bit and give the female characters more to do, I think it would be a pretty great franchise. (American Assassin does get props for not featuring a ridiculous romance subplot, other than Katrina.) Dylan definitely has the chops to be a leading man, and this role definitely goes a long way in cementing him as an action star.

In all honesty, I can’t say I wouldn’t recommend American Assassin. If you’re looking for a good popcorn flick, a movie you can go watch and turn of your brain for two hours and just be entertained, then this fits the bill nicely. Plus you get the added bonus of getting to watch Dylan be awesome, which is worth the admission price alone. And stuff blows up. That’s always fun.

American Assassin opens today in theaters across the United States. Click here to see when it’s opening across the world.

2 thoughts on “American Assassin Is Definitely A Movie”