The season two premiere of Orphan Black started off with a bang. Literally. Several of them. There were guns aplenty in the season opener as Sarah frantically searches for her daughter and evades the formidable DYAD institute. The other two protagonist clones, Cosima and Alison, may have their own personal drama occurring, but the nature of their shared genetics makes their plots permanently intertwined and their unexpected sisterhood dynamic incredibly interesting to observe. Their budding friendship with Sarah’s brother Felix also keeps the group together, making them an unlikely makeshift family. Their individuality but shared genetics makes their goals similar, but highly personal. This means that all the separate plot threads may get tangled together, but still remain separate entities.

Season two picks up shortly after the shocking finale. I’d been under the assumption that Mrs. S took Kira and escaped for their own safety, but that’s quickly revealed to not be the case. Pro-clone Rachel Duncan implies that they’ve taken her, but later denies this and claims that it was a ruse to get Sarah to DYAD. Sarah proves her continued ingenuity, bravery, and intelligence as she fights to find her daughter. The fact that a large secretive institute that specializes in covert ops is having difficulty catching her really speaks volumes to how skilled she really is. While most of her efforts during this episode seemed to be in vain, her evasion tactics are something to be admired. I’m eager to see how her skills unravel this other organization that appears to have actually taken Kira. Who are they? What are their motives? How do they work?

The relationship between Cosima and Delphine is complex and causes me a great amount of intense shipper pain. Delphine is still an employee of the DYAD Institute and her loyalty seems to be in question, but I don’t at all doubt her love for Cosima. Even her apparent betrayal by informing Doctor Leekie about Cosima’s illness feels like it’s coming from a place of concern. She doesn’t want Cosima to die so she breaks her promise and passes the blood sample along to DYAD. My interpretation of this course of events could be wrong, but I have an unwavering faith in their romance making it hard for me to see her working against Cosima. If she turns out to be playing with Cosima’s heart, I will probably cry. They are one of my favorite couples on TV right now. 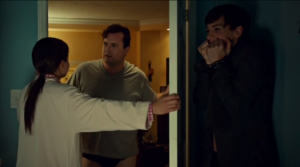 Alison and Felix’s relationship has become one of my favorites on the show. It’s an unlikely pair, but it’s entirely sweet and surprisingly trusting. While Alison is the “soccer mom” clone and Felix is the rowdy drug-using party boy, they’ve found a sort of balance with one another. Alison is also a surprising character in her own right. Ingenuity and intelligence seems to be a genetic trait shared by all three of our main clones. Her delivery of the gun in the flower bouquet was smart, unexpected, and had a the sweet soccer mom flavor that is entirely Alison. It also proves that even though she’s signed a contract with DYAD, she hasn’t entirely left her clones behind to fend for themselves. She wants her own suburban life back, but she isn’t completely uncaring towards Clone Club.

The biggest shocker of the episode was the reveal that Helena is alive. I have a sneaking suspicion that Helena was intended to die last season, but the overwhelming fan reaction to her may have brought her back. I have no solid information to back up this claim, but her injuries last season were pretty intense. I don’t see a character having those sort of injuries inflicted on them if they were truly meant to survive. Then again, Helena has proven to have an abnormally high pain tolerance, so maybe this is just a continuation of that theme. Either way, I’m pretty happy to see her. For an antagonist, she’s surprisingly likable in her unusual, quirky way. She’ll probably be out of commission for a while, though, because that was a pretty severe amount of blood loss all over that hospital floor. 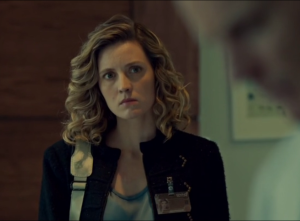 The plot during this episode was fast, intricate, and loaded with developments. With Orphan Black there is simply no such thing as a “filler” episode and I suspect that I’ll be holding my breath for the next several weeks as the mysteries unfold. I’ll be rooting for Sarah and Kira to be reunited, for Cosima and Delphine’s relationship to survive, and for the sweet friendship between Felix and Alison to strengthen. I’m not sure how many of these wishes will happen this season, but I’ll be excited to see how it all unfolds.