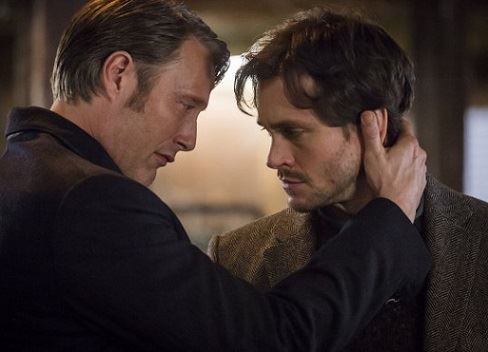 After the events of last week’s explosive episode, this one felt a little tame in comparison.  It was a bit of a filler, but it provided some interesting groundwork for what might occur before the season finale.  It had an interesting compare and contrast between characters who were innocent but thought to be guilty and vice versa.  I think it was a bit too soon for Will to be out there consulting on cases, especially given how close to home this one hit.  But before I get into all that, let’s jump into my review of “Su-zakana”.

The beginning of this episode saw Jack and Will indulging in some male bonding in the form of ice fishing.  They had a very loaded conversation about how best to catch a fish that doesn’t want to be caught.  While everyone else is resting soundly, thinking that the Chesapeake Ripper has been stopped, these two know that is not the case.  So what “bait” will Jack and Will use lure out their uncatchable prey?  Will it be Jack, tying into the fight we saw between him and Hannibal at the beginning of this season?  I’m having some difficulty with that, as I don’t see Jack willingly putting himself into that kind of situation.  If something happens to him, Bella will be all alone.  From the fishing scene, we cut to another beautifully edited cooking montage of Hannibal preparing the fish Will had caught.  Watching him work makes me wish Mads could just cook dinner for me in-character.  In this scene, Hannibal seemed to have an air of “I’ve won” about him.  And why shouldn’t he?  His ploy with Chilton worked out perfectly, effectively letting him off the hook.  (I was pretty disappointed with Chilton’s fate in the show, given the actor’s masterful performance, and as a book reader, wanting to see him and Hannibal playing their little cat and mouse games in the state hospital.)  Hannibal put up the good face of “letting bygones be bygones”, but I think he can sense Jack and Will are still hunting him. 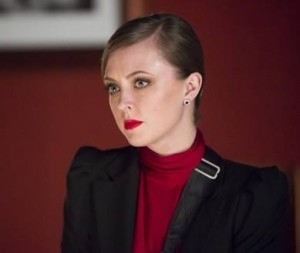 Book readers like myself were thrown another bone when Hannibal was shown in a session with a woman named Margot.  From the moment I heard her name and she began talking about her brother, a huge grin split across my face.  This woman talked about wanting to kill her brother, who she knew to be a monster but everyone else thought was falsely accused.  They made no mention of her brother’s name, but I believe this to be Margot and Mason Verger.  The writers of the show have been pretty fluid in their interpretation of the source material, so I’m really interested to see what they have in store.  Show!Margot is vastly different from her literary counterpart, which I don’t really mind, but one detail I do hope they keep in is Margot being a lesbian.  The show has been light on its LGBT representation, and I think Margot would be a good start in that direction. 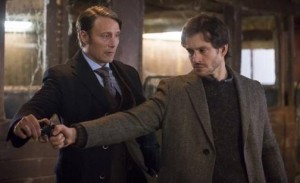 After working on the Ripper case for so long, the team went back to more generalized cases. This week’s victim being a woman sewn inside the womb of a horse.  Hannibal was initially brought on to consult but subtlety suggested to Jack that this case needed someone who could really get inside the killer’s mind.  Of course that person was Will, which I think was a huge mistake.  Will got too emotionally connected to this case because it so mirrored his situation with Hannibal.  Both Will and Peter are unstable in one way or another and are manipulated by people they’re supposed to be able to trust.  Hannibal and Clark both preyed on them and used their weaknesses against them.  During the course of the episode, Will and Hannibal had a session where they agreed not to lie to each other, Will preferring lies of omission over outright lies.  Such an agreement created an interesting scenario where Hannibal almost got to truly be himself around Will.  He sees the darkness inside Will, and it fascinates him to see Will struggle to control it.  I don’t think my theory of Hannibal trying to get revenge against Will is right anymore.  Much like Clarice later down the line, Hannibal is trying to cultivate a connection and a kinship between himself and Will, wanting to have someone with whom he can truly be himself.  We saw the admiration in Hannibal’s eyes after he took the gun out of Will’s hand.  On a very fandom side note, if I didn’t ship Hannigram before, I would definitely ship them after this episode.  I mean, my God!

The previews for next week’s weren’t very telling.  If anything, I hope they continue to develop Margot and possibly introduce her brother, Mason.  I promise not to give any spoilers away to non-book readers, but if Fuller is truly thinking long-term with this show, the Vergers would definitely be a step in that direction.  I can’t help but feel sorry for Alana and worry about how she is going to react when she finds out who Hannibal truly is.  She didn’t like the idea of Hannibal and Will resuming their sessions and the danger implied there.

What were your thoughts?  To my fellow viewers who are fans of the books, are you excited for the possible implications of the introduction of Margot and her brother?  What were your favorite and least favorite moments?  Comment below and thank you for reading!