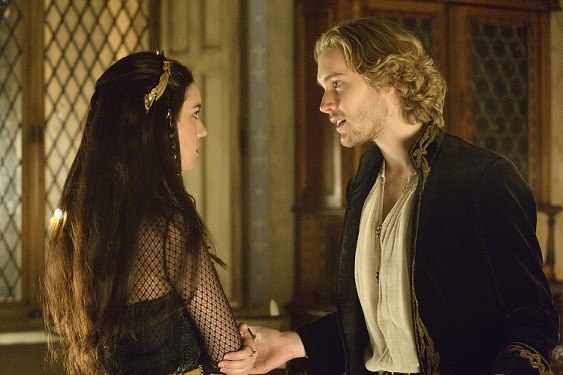 The honeymoon period is officially over.  Mary and Francis clashed in a big way this week, just as I feared would happen.  Henry’s grip on reality loosened even more during this episode, which makes me question how long he has before someone outside of the court discovers just how unstable he is.  Catherine and Kenna teamed up in an unlikely alliance to dethrone Penelope, and Lola wondered about the ghosts in her new husband’s past.  We haven’t a moment to lose, so let’s jump into my review for “No Exit”! 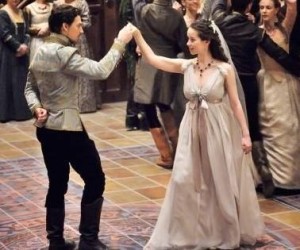 Damn it, Reign writers!  Do not do this to me or to Lola!  My chant during Lola and Julian’s scenes together was, “Don’t make Julian evil!”  The episode opened with the court getting ready for the wedding ceremony, Julian already doting on Lola by gifting her with a necklace of sapphires.  But then the writers had to ruin it with a later interaction between the newlyweds wherein Julian seemed to be a little too interested in Lola’s dowry and dodged questions about his family.  The couple had an agreement not to question their pasts, which Julian brought up during this episode, casting further doubt on him.  I’m hoping that when his secrets are revealed, they amount to nothing more than mistakes he made that got him in some hot water with the wrong people.  If he was just in it for the money, then why not stay engaged to Greer, whose family is the wealthiest out of Mary’s ladies?  But, playing Devil’s advocate, if his MO is killing his wives after obtaining their wealth, then Lola is the perfect victim.  I like Julian, and I really don’t want them to turn him into another ridiculous villain like Tomas of Portugal.  Plus, I don’t like the idea of creating drama just for the sake of having drama, especially when Lola has enough drama with being pregnant with Francis’ child (a situation that in and of itself was drama for the sake of having it).  So until I’m shown otherwise, I am still firmly on Team Julian!

Nostradamus and Olivia made a reappearance in something of a throwaway subplot that I could have easily done without.  The two of them together was a bit unsettling for me, given the traumatic experience Olivia had just recently endured.  It just seemed a bit much to put the two of them together.  But, my prejudices aside, the two of them were shown cuddled up in post-coital bliss, making tentative plans to leave the castle and start a new life together.  But then Nostradamus has a vision of a pile of bodies, Olivia’s resting among them in a pale white nightgown.  The vision appeared to be in the castle, which further prompted Nostradamus’ need to leave.  Unfortunately for him, Catherine was less than enthusiastic about the prospect of one of her lackeys leaving, especially given what he knows about her.  So in typical Catherine fashion, she makes thinly-veiled threats and tries to have Olivia killed with a viper.  Nostradamus ultimately ended up sending Olivia away and opted to stay behind.  A part of me felt sorry for him being denied what was probably his last chance at happiness, but the other part of me thinks it was no less than he deserved, given his treatment of Clarissa.

I must admit: my favorite part of this episode was seeing Catherine and Kenna put Penelope back in her place.  The girl was getting a little too big for her britches and finally got knocked down a peg or two…dozen.  Kenna and Bash had a sweet interaction towards the beginning of the episode, where Bash gave her a ring of his grandmother’s as a wedding ring, saying if they were going to be married, they better start acting like a married couple.  But the ring was taken away by Penelope, who felt threatened by Henry’s continued interest and overt advances towards Kenna.  Catherine approached Kenna with a plan to get rid of Penelope that involved sex.  The scene between Kenna and Penelope trading sex tips was amusing in its own weird way.  I loved the look on Penelope’s face when she tried to say that Catherine couldn’t touch her and Kenna dismissed that, pretty much saying if Catherine wanted her dead, she’d be dead.  Seeing Henry trussed up and treated like a mere sex puppet was pretty amusing, but the second go-around with the Hanging Cross seemed to break something inside his mind.  Catherine burst into his chambers with a Bishop (later revealed to be an actor), who shamed Henry for being in such an unsavory position.  Catherine quickly jumped in to lay the blame on Penelope, and Henry dismissed her from his side and sent her back to the kitchens.  The racket man returned to torment Henry, which makes me think Henry had something to do with his death.  In keeping her end of their agreement, Catherine gave Kenna the estate Henry had given to her.  Kenna and Bash shared quite the tender moment at the end, which I really enjoyed.  I really hope that Kenna and Bash go to their new estate for a little while.  No, Mabastian shippers, that’s not so Bash will be away from Mary, but so that Kenna can finally get some peace and distance away from Henry.  The man keeps forcing himself on her every time he’s around her, and the audience can practically see her skin crawling.  Plus I really liked their kiss and I’d like to see what they are like with one another away from the prying eyes of the court. 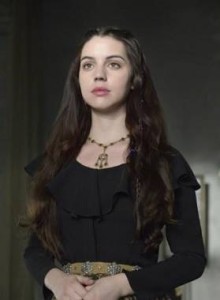 Mary and Francis butted heads in a big way this episode, their relationship suffering damage at the end.  As viewers we can see both sides of the story, which makes it a bit more difficult for some (like me) to dole out judgment on who was right and who was wrong.  Let’s look at this logically for a moment, shall we?  Both Mary and Francis had valid arguments: Mary’s love for her country and not wanting to see it tear itself apart and Francis’ love for Mary and not wanting her to be killed by an English assassin or her own people in a country that is a powder keg waiting to be lit.  Do I think Francis’ method of preventing Mary from leaving by locking her up was a bit extreme?  Yes, I do.  But do I think Mary’s brother worked her into a frenzy, thus preventing her from approaching the situation with a clear mind?  Yes, I do.  I do think Mary needs to visit Scotland sometime very soon but not half-cocked and certainly not with her Protestant half-brother, whose own footman turned out to be a spy and would-be assassin for England.  I still think that Francis is somewhat threatened by Mary growing into her power as a ruler while still struggling to support her in that.  Remember that Francis is still a prince while Mary is a queen, one who is finally starting to recognize what that title means and entails.  We could see that struggle when Francis spoke with Bash during the episode.  He talked about knowing the conflict of their loyalties to their countries versus their loyalties to each other would come between them.  When Mary first approached him about going to Scotland, it did seem as though Francis was putting the needs of France above Mary’s concerns for Scotland.  But he realized how much this situation was upsetting her and warmed to the idea of going.  But when he stopped her from going at the end of the episode, I agreed with him then, although perhaps not with his methods.  Mary was entirely too upset and unable to look at the situation with a clear head, therefore unable to see the dangerous situation she was putting herself in.  I’m worried about what will happen next week, as more conflict seems to be on the horizon with Mary’s Uncle coming to court.

This was a good episode.  One which left me worrying about the possible long-term damage to my favorite relationship on this show as a result of the episode’s events.  What are your thoughts, favorite, and least favorite moments?  As always, comment below and thank you for reading!