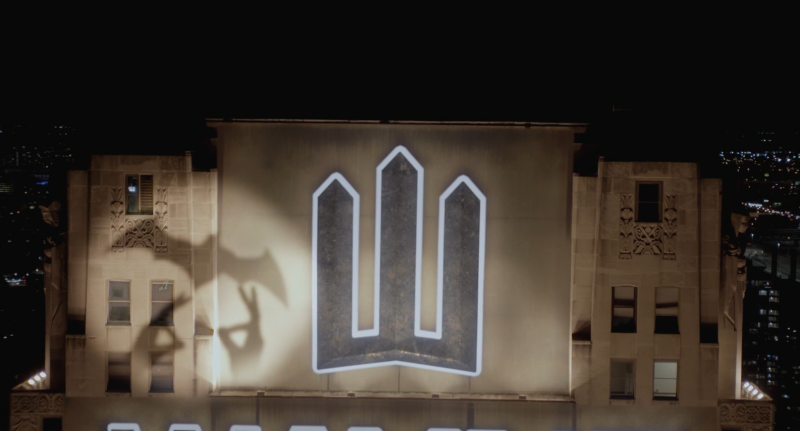 Three episodes in, it looks like Batwoman is hitting its stride! Alice is FINALLY starting to show some potential, Kate is taking responsibility for Gotham, and the story is definitely picking up pace. If you’re undecided on whether to stick with Batwoman, ‘Down Down Down’ just might be the episode to win you over.

The opening of ‘Down Down Down’ – though the fuzzy filter gave me a headache – was a breath of fresh air. I admit, seeing Alice made me roll my eyes at first because I haven’t been a fan of Rachel Skarsten’s acting choices in the first two episodes. Something seems different now, though. Alice feels more like a character now, not a plot device. Maybe the problem is that Skarsten was trying to make Alice detached before and it just came off limp instead of creepy. Whatever her problem was, for the first time this series I’m optimistic that she can be an asset, not a liability.

Harsh, I’m aware. But I’m growing to love the show. A weak villain can sink a superhero show, you guys.

Moving on, there were some other tweaks that are paying off in a big way. Mary has been toned down a little as well as given more comedic moments. The friend who found her just a little fake last episode is now a fan. I personally love the moments where Mary is awkwardly caught between Sophie and her husband, listening to the “Who is Kate and why have you never mentioned her?” web of lies Sophie is spinning.

Why has Sophie never brought that up to her husband? Seriously? If she’s happy with him, shouldn’t she be comfortable mentioning a college fling even if she downplayed it? I don’t want to police how people come out, and obviously Sophie was deeply scarred by nearly being kicked out of the Academy… but this is her husband. Not being solid in that relationship suggests she married him for reasons other than love.

At least she’s not really Kate’s problem at the moment. The showrunners gave us our wish for Kate romances early – and dare we hope often? – with the funny, perceptive bartender Reagan. I’ll be glad to see her return, even if I’m confused by the fact that she didn’t ask Kate for her number before saying she’ll call. (Is she just gonna call The Crows and ask to be transferred?)

The Batwoman costume is finally here! I’m going to forgive the time Kate took to make it pretty while people were literally being held hostage, because it was the first outing of a new super hero in the public’s eyes. Image is important. Plus, it looks awesome in motion.

Best of all, the slow pacing has been shed in favor of more action, more tension, and a generally more exciting plot. We see Batman’s Rogues Gallery starting to pop up heralded by Tommy Elliot (Hush), who also makes a Riddler reference. Am I little disappointed with how easily he was defeated? Maybe, but he’s in Arkham now. That’s basically a staging area for crime anyway, he’ll be back.

Also, I can’t help but wonder who else is going to drop in to test the new Bat’s mettle. The showrunners shouldn’t bust out everyone awesome the first season, but there’s so many minor villains for Kate to sharpen her skills on.

Everyone’s storylines are moving forward but skillfully woven together: Kate and Luke’s debate over whether Gotham needs a Bat (and whether that should be Kate), Jacob’s doubts about Alice’s identity, Alice’s background plotting, Tommy’s scheming, Mary’s secret radical humanitarianism, Sophie’s weird anxiety-driven spying, and whatever Catherine has going on. (Seriously, what does she have up her designer sleeve? Why is she being so secretive about it? Any ideas? Feel free to share your theories in the comments!)

What I’m saying is, ‘Down Down Down’ has a lot going on. It works, though! This episode was exciting. It’s compelling. It’s what I wanted the first two episodes to be, and I’m so deeply grateful to see Batwoman hit its stride so early in the season. I’ve loved shows that were borderline cringey for half the first season, and I was afraid this would be one of them.

It isn’t. It was great, almost exactly what we thought we were getting when we signed up for this show. When I saw Kate step out in her own customized Batsuit for the first time I felt something ease in my nerdy soul, because this show is going to be so much fun. Things aren’t perfect but they’re looking up.

Another good thing? We aren’t the only ones who liked this episode. Audience viewership numbers have stabilized, too, so ‘Down Down Down’ puts the show in a good place for a ratings upswing. I just hope they stop this trend of someone finding out Batwoman’s identity literally every episode. That’s going to get old reeeeeaaaallll quick.

In lieu of final notes, I’m going to make a  personal appeal to Arrowverse!Bruce Wayne. LOCK UP YOUR HOUSE, YOU ABSOLUTE BANANA! Come on, man. Everyone and your cousin is just strolling through your house playing with your desk. There’s a freaking tree in your office. You’re improbably rich, hire more than just Luke to take care of that beautiful house your parents loved so much.

What did you think of ‘Down Down Down’? Are you as excited and relieved as I am? Is this episode going to win you over for good? Let us know in the comments, or join the discussion on Facebook or Twitter!