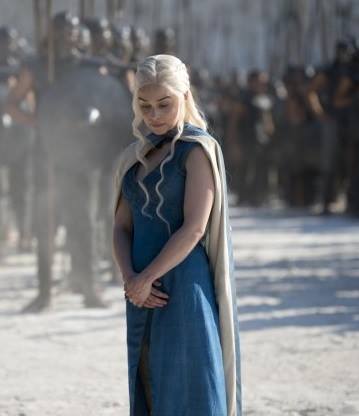 Khaleesi, let me be your champion!  Breaker of Chains dealt with some of the aftermath of Joffrey and Margaery’s wedding as well as catching up with some other characters – and out of respect for those who are only fans of the show, I’ll try to keep my comparisons between the TV show and the books to a minimum.  Please note, though, that this article also carries a trigger warning for brief discussion of rape. Additionally, although this review is MOSTLY spoiler free, any spoilers for major plot points (especially those from the books) will be hidden under spoiler text. Simply highlight the text to reveal the spoilers. Example:

Spoilers will be hidden here.

In King’s Landing, things picked up right where we left off last week.  I’m really happy that Sansa finally escaped, but that doesn’t mean that I trust her being with Littlefinger.  That man has always looked out for his best interests above all others, and it’s obvious that Sansa is just another pawn in his quest for power.  Coupled with the fact that she’s growing into quite the lovely young lady, and Littlefinger still carries a torch for her mother like a total creeper…yeah, I don’t trust her with that man at all. 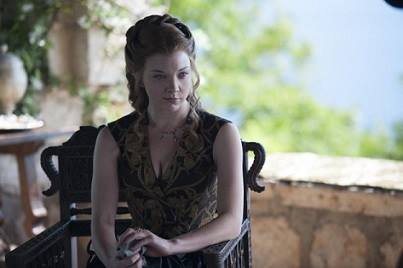 The scene between Margaery and the Queen of Thorns was both touching and educational, as it showed just how politically savvy Lady Olenna truly is.  I enjoy every scene that she’s in; the actress does such a remarkable job with the character.  Viewers were treated to a slight moment of vulnerability on Lady Olenna’s part before she was back to business as usual. Both grandmother and granddaughter are intent on playing this dangerous game of thrones,

and as a book fan, all I will tease is this: don’t expect the Tyrells to be heading back to Highgarden just yet.

The Lannister family scene at Joffrey’s viewing went from bad to worse.  Tywin showed just how much of an ass he truly is with his little “lesson”.  Tommen and Myrcella are far more well-adjusted than Joffrey, but that doesn’t mean that Tywin should have used that moment to play teacher to Tommen while Cersei was trying to grieve the death of her child.  It seems to me that Tywin is trying to gain influence over Tommen and at the same time knock Cersei down a peg or two, as if to say, “It’s your fault Joffrey turned out the way he did.”  Geekiary Admin Angel K and I had an interesting discussion not too long ago about Joffrey and the old nature versus nurture argument in regards to why he turned out the way he did.  We both agreed that Cersei wasn’t entirely to blame, and that there was something inherently wrong with Joffrey from day one.  In the books, there is mention of an incident of animal cruelty, involving a pregnant cat from the kitchens, but even on the show we saw just how cruel he could be – and when he became king, that inclination towards cruelty only worsened.

Speaking of cruelty, Jaime arrived on the scene and decided to one-up his father, forcing himself on Cersei beside the corpse of their dead son.  In the book, this scene played out quite a bit differently – Jaime doesn’t arrive in King’s Landing until after Joffrey dies, and the sex between Jaime and Cersei is consensual.  I like Jaime as a character because he is so complex, but I won’t excuse what he did.  It was sickening to see that, at a time when he should have been comforting his sister and the mother of his children, all that he could think about was sex.  This was just more proof that the Lannisters are a twisted group of people who love to hurt each other.

Moving on to more positive things, in my opinion Game of Thrones couldn’t have found a better actor to play Oberyn.  Pedro Pascal does such an amazing job in every scene he’s in, no matter how big or small, and this episode was no different.  I love how the writers didn’t beat around the bush regarding Oberyn’s bisexuality or his close relationship with Ellaria.  What I love the most about his scenes is how the writers couple something sexual about him with something formidable.  Oberyn is one of the most deadly men in Westoros, and when he meets with Tywin in Breaker of Chains we learn that he is a poison expert (and this is something that is likely to come into play again, by the way).  The one thing that I love the most about Oberyn is that the reasoning behind his presence in King’s Landing is no secret; in fact, he’s practically announcing it to the world every chance he gets.  He wants justice for the brutal murders of his sister Elia and her children – what happened to them was horrifying,

and Tywin must have ice cold water running through his veins to be able to stand before Oberyn and claim that he had no involvement in what happened (FYI – he did).

However, the scene ended in an agreement between the two men: Oberyn will serve as a judge at Tyrion’s trial, in exchange for justice for his slain family.

Speaking of Tyrion, the scene between him and Podrick was heartbreaking.  The boy’s loyalty is so sweet, and the actor did a great job showing how much it broke Pod’s heart to be sent away.  But Tyrion knows how much danger the boy is in by even being associated with him, so sending Podrick away was the only thing he could do.  Though the show depicts Podrick quite differently from the character in the book, I’ve really enjoyed the actor’s performance.

At Dragonstone, Davos continues to be one of my favorite minor characters – and one of just two that I like in this group of characters (the other being Shireen).  In this particular episode I really loved how quick Davos was to point out Stannis’ hypocrisy when the would-be king balked at the idea of using an army of sell swords when Stannis was perfectly okay with using blood magic to murder his own brother.  Davos had the right of it when he said that wars aren’t won by prophecies and visions in the flames, they are won by men.

When Davos then visits Shireen, the scene between the two of them is adorable. I really love them together, as Shireen is obviously lonesome and no one else on that cold rock seems to have any time for her.  I loved Davos’ line about the difference between a pirate and a smuggler: if you’re a famous smuggler, you aren’t doing it right!  The conversation segued into a nice mention of the Iron Bank of Braavos, with Davos dictating a letter for the Bank and Shireen writing it down. The Iron Bank is not to be trifled with, and this mention made me wonder if we will see someone from it before the end of this season. 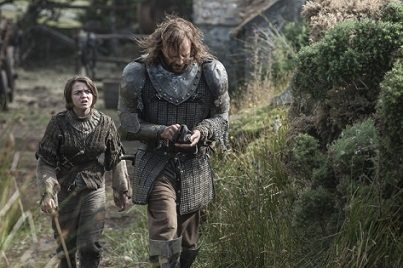 Another one of my favorite Game of Thrones ‘odd couples’ is The Hound and Arya. Rory McCann does such an amazing job as The Hound, and Maisie Williams as Arya plays off him brilliantly.  I love how they show that even though Arya is growing more devious – coming up with that cover story about them so quickly – she still has an innocence about her.  She expects The Hound to behave honorably, but it seems that he’s too far gone to care about a trifling thing like honor.  He’s looking out for himself, and Arya is nothing but a golden ticket to him.  He’s teaching her some hard lessons, but they’re ones that Arya needs to learn if she expects to survive in this warring land.

In terms of what happened in The North, I couldn’t help but feel a bit sorry for Sam.  I think that he did the right thing taking Gilly to Mole’s Town, even if she didn’t see it that way.  She was one woman in a keep of one hundred men, some of whom would have no problem slipping into her room and forcing themselves on her – and seeing Sam make this decision showed his growing maturity, which I love.  His experiences beyond the Wall changed him, and he’s slowly starting to find his footing. And he’s not the only one doing so! I love having Jon Snow back at Castle Black – he’s truly in his element and is continuing to show up Alliser Throne. Jon Snow is a true leader, and  I didn’t like seeing him with the wildlings because that’s clearly not where he was meant to be. At the Wall, he’s the only one who can advise these men about the force that’s heading their way, though I’m interested to see how an expedition back to Craster’s Keep would go, considering that Ygritte and her pack of wildlings are slowly closing in on Castle Black from the south.  Hell hath no fury like a woman scorned, and every time Ygritte shows up on screen it’s clear that she’s out for blood.  I didn’t care for her relationship with Jon, as she seemed a bit condescending at times towards him, but I do admire how she’s able to hold her own in that large group of men. 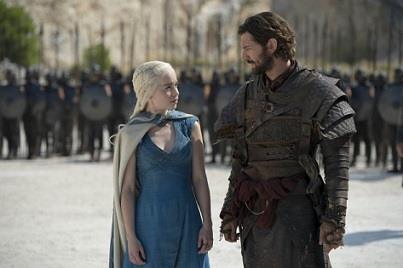 And finally, we made it to Meereen! Major props to the CGI technicians because the opening shot of this city looked stunning.  I loved how they were able to show just how massive the gates were with that tiny rider as comparison.  It was also amusing when Dany’s four closest advisors jockeyed for the honor of being her champion. I’m usually not a big fan of actor changes, but I’m rather fond of this new Daario.  They’ve toned down the character a bit, of course – in the books, Daario has blue hair and acts quite the peacock (something the Tyroshi are known for) – but the new actor gives off a certain devious air that I didn’t quite get from the actor who played Daario in season three.

In Breaker of Chains it was certainly cocky of Daario to stand in the path of Meereen’s champion the way he did, and that little wink of his put a grin on my face.  I loved just how easily he disposed of the rider, and then whipped out his own business and turned the champion’s previous action back toward the gates.  But the best part was definitely Dany’s speech.  Listening to her truly be the Mother of Dragons and Breaker of Chains was amazing, and her words gave me chills.  Launching the barrels full of collars was a fantastic finishing note, and you could see by the look in the slaves’ eyes that her speech had taken root.

As always, this was a great episode and I felt like it was over too soon.  I’m always eager to see what’s next, but I’m curious about your thoughts, dear readers.  What were your favorite and least favorite moments of Breaker of Chains?  Whatever they are, comment below and thank you for reading! 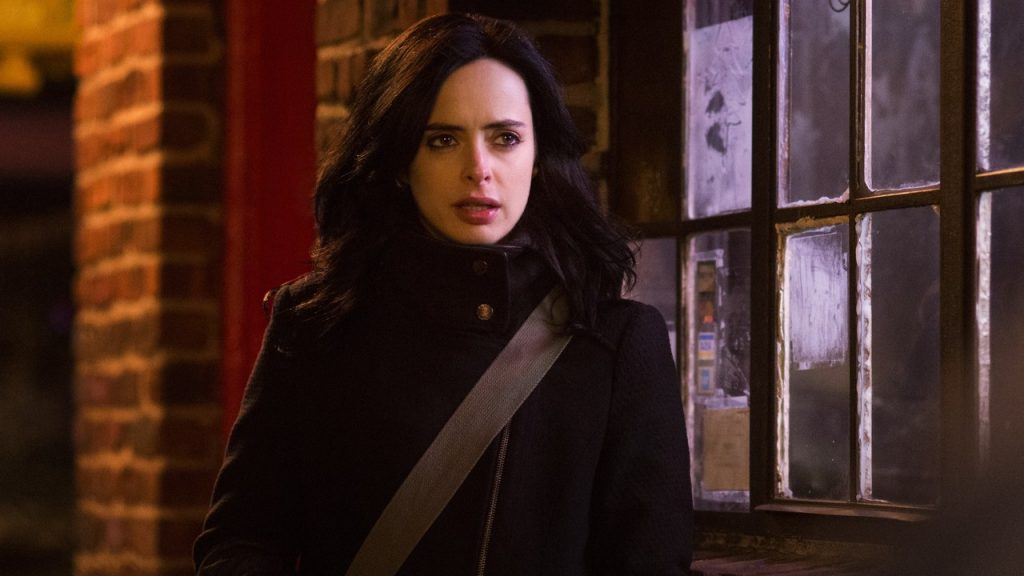 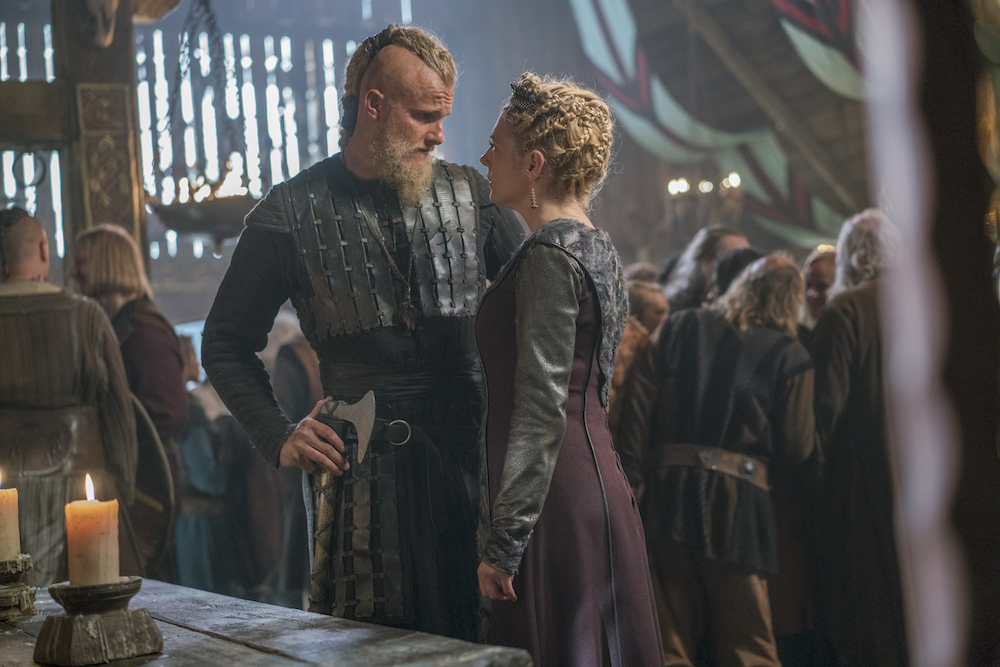 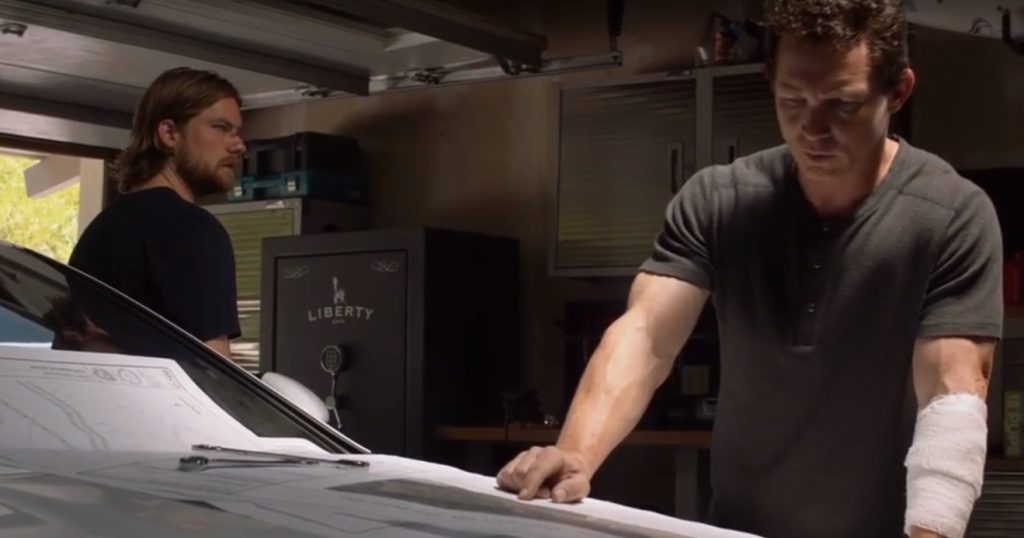