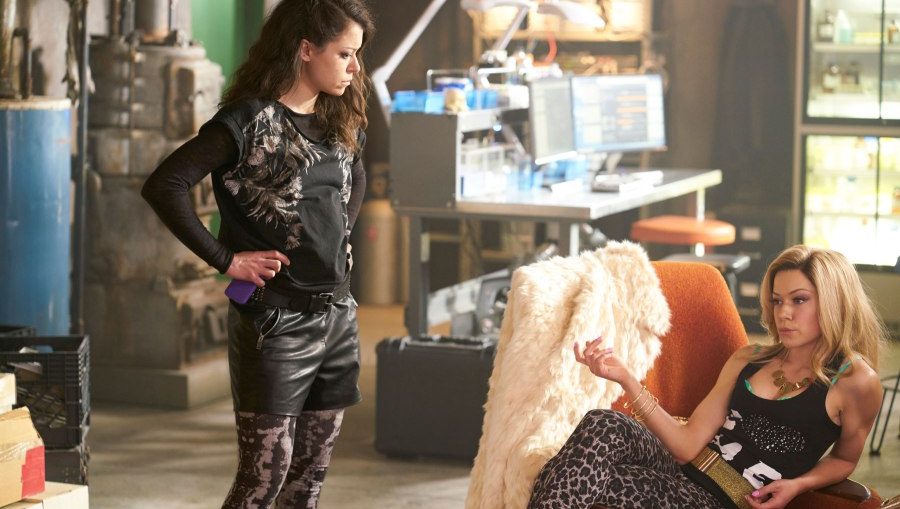 There are lots of things that Orphan Black does better than other shows, but season finales are probably the best. “From Dancing Mice to Psychopaths” gave us the suspense and thrills needed to end a season, as well as some decent cliffhangers for season five. But there was no happy reunion dancing or dinner party at the end of this season because none of our sestras are together.

Indeed, the season two finale gave us that memorable dance number with all of our clones shaking about in Felix’s flat, and season three gave us the Bubbles dinner party. Season four ended on a much more grim note. Most of the good news centered around Cosima (well, except for the whole dying thing), she not only discovered the cure for the sick clones (likely Castor as well as Leda), but was reunited with a very much alive Delphine. Cophine fans can rejoice! In the story told through Krystal’s eyes, Delphine was shot by Duko but saved by higher-ups within Neolution. She has been hiding out in their camps on the Island of Dr. Moreau ever since. How absolutely heartbreaking was the scene where 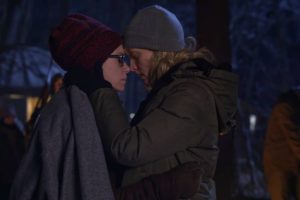 Delphine stripped down and climbed into bed with Cosima to help keep her alive and warm? This is love, folks. It seems like Delphine won’t be able to stay with Cosima come next season, but let’s just bask in the moment for now with the two of them. I also love Cosima and Charlotte, and I hope that little Charlotte is okay.

Speaking of Krystal, she is now officially a member of Clone Club, even if she is in denial about it. She has quickly become one of my favorite clones, and who knew how close she was to figuring out the actual truth? (Even though she thinks that Neolution is a skin-care brand.) You can tell that Tatiana Maslany loves to play her; she is so different (bubbly, extroverted) than the rest of the clones and she brings an interesting dynamic. I hope that we get to see more of her next season even if she plays a minor role.

Helena and Alison had fairly small roles this week compared to the rest of the clones, but I am just glad that they are safe. Although Alison is my favorite sestra, I know that when she isn’t in the picture, she is far from harm. And thank goodness that Donnie is with her as well. I figured that we would get some babies from Helena this season, but she isn’t quite there. I want some babies to be born before the series ends, Orphan Black!

Of course, the clones we saw the most of were Sarah and Rachel, and most of the episode was the two of them butting heads. After successfully plotting revenge against Evie Cho (RIP, Evie!), Rachel pushed her way to the top of Neolution by stealing Cosima’s cure information and combining it with Evie’s bot technology. Rachel put cloning back on the table, which is pretty frightening. After Susan and the rest of the Clone Cl 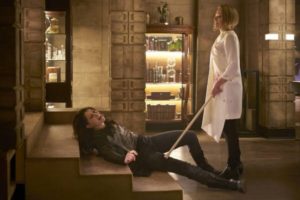 ub found out, Rachel tried to make sure that she is the one calling the shots from now on. Stabbing your mother, Rachel? That is pretty bad. Trying to kill your one sestra who can probably help you the most? Very bad, Rachel. Even though the higher-ups in Neolution are backing Rachel for now, I am sure that the “others” on the island are going to do whatever it takes to take Rachel down.

Let’s talk about Sarah. She had a rough episode. She left Kira (again) with S and went after Rachel on the island. Before that, though, getting Ira on her side was a great win for the Clone Club. I love Ari Millen and I wish that he had been around more in season four, but I suppose most of the Castor story is over at this point. Ira is such a breath of fresh air in the Castor lineup, though, and I am glad that he has stuck around and appears safe for now. Please let Ira be back next season!

Going back to Sarah, though, she ended the episode in a very dire situation. After being attacked by Rachel, there is really no way for us to know if she will be safe going forward. Unfortunately, we will have to wait until 2017 to learn the outcome. By the way, Orphan Black was renewed this week for a fifth season to air in 2017, but it will be its last. This makes me happy that we get more clones, but sad that it will be over. One thing I know, though, is that this show is wonderful, memorable, and I am so glad to be a viewer.

What are your thoughts of the season finale? What is on your season five wish list? Let us know in the comments!