“The Scandal of Altruism” was a tough one to watch. Even though Sarah is rash, the other members of the Clone Club hardly ever make the wrong moves. Dangerous, yes, but in the scheme of things, Cosima and Sarah messed up bigger than probably any other misstep in the series…and it cost them big time.

Even though Beth is the clone about whom we know the least (well, until this season), I think it is fair to say that she is the true hero in this series. As it turns out, she had gotten as far into Neolution, Dyad, and Leda as the rest of the Clone Club is just now, and died to protect her sisters from the horrific truths. Unfortunately, it took a huge sacrifice by Sarah and Cosima to learn the same information that Beth knew all along.

I think that one of the biggest reveals in this episode is that the night she died, Beth donned the blonde wig and gun to assassinate Susan Duncan, whom she believed was behind all of the secrets. And frankly, that is who we were meant to think was the main villain all along. It turns out that Susan thought of her Leda clones as children and loved all of them; after all, she had put her entire life’s work into creating the clones and ensuring their safety. Even though Beth (and really the rest of the clones and the audience) thought that Susan and Dyad were trying to learn every secret of the clones’ lives and keep the projects hidden, it was really all to protect the clones and keep them safe. It was a bit of a twist and by the end of the episode, I actually felt sorry for Susan.

But you see, this all goes deeper than Dyad and Leda and Castor–it all has roots in Neolution and took a much darker turn than we all realized. Evie Cho is actually the big bad of the series! Her need for power ended up totally screwing the Clone Club by killing Delphine (as Evie confessed to–but we will have to wait for Krystal’s confirmation), stealing Cosima’s research then destroying what was left, and murdering Kendall. Here 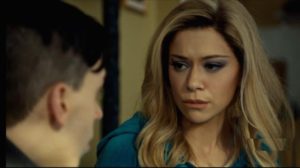 we thought that Susan was after Kendall’s genetic tissue all along, which was true, but it wasn’t Evie’s end game. She already had everything she needed, so a power play was her best weapon against Susan and the clones. And it hurt bad.

Kendall was not a character that we knew particularly well, and frankly she was grouchy and unapproachable. But she seemed to be proud of S, and as soon as she found out that she was the original for Leda and Castor, she was willing to do whatever she could to help them. Sarah and Cosima especially had come to know her well, and forcing Cosima to be present at her murder was terrible. Truly, it was one of the most visceral character deaths that I have encountered in a while–and she wasn’t even a main character! She was just that integral to the story, and had become family.

Unfortunately, there wasn’t much humor or lightness to the episode, save for the few moments that we spent with Krystal. I actually have really grown to love Krystal in the past couple of episodes. She is written to be the stereotypical “dumb blonde” but she is actually very intuitive and a survivor. She is the every woman clone, and I love her for it. The pepper spray incident with Felix was the one scene that didn’t involve something super intense, and yet it involved someone getting pepper-sprayed. Needless to say, this episode was pretty intense and serious. Two important things came out of the scenes with Felix, Art, and Krystal though. The first is that Felix did not tell Krystal the truth about the clones. He hinted at the rest of it, but she did not become a self-aware member of the Clone Club (that is good for now so she can stay safe). The other huge piece is that she saw Delphine get shot. Based on the bit of a cliffhanger ending with Krystal, we don’t know for sure that she is dead or who shot her, but hey, we have a witness and hopefully Delphine’s story will get told soon.

In summation, this was an incredible episode, albeit sad and intense. Getting so much screen time with Cosima again was a treat, but we will have to wait until next week to see what sort of ramifications all of Evie’s actions will have. It was horrible and shocking, and Kendall will be missed!