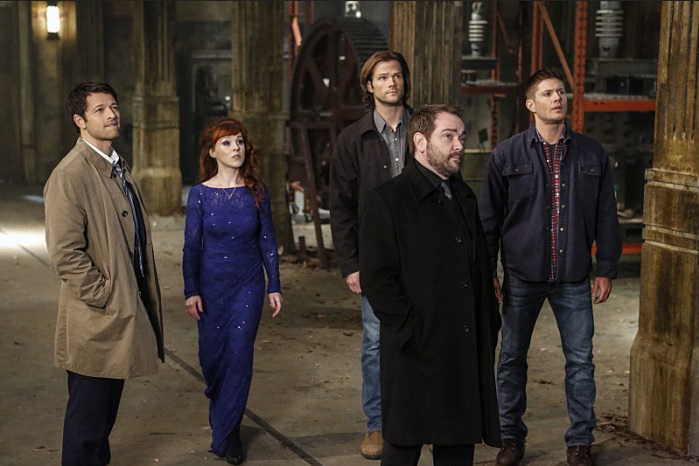 The trouble with the penultimate episode of Supernatural is that it’s designed to only ever raise questions, not give answers. It’s designed to boost viewer anticipation for the next episode, and set up the plot for the finale and opener for the next season. “We Happy Few” did just that, but might have worked better simply as the first half of a two-hour finale.

One of the unfortunate things about this episode was the pacing. Since it was the lead-in episode to the finale, you expect it to be light on answers and feel a little incomplete, but “We Happy Few” felt more like it was only the first fourth of a complete episode. Even then, it felt like the action was squashed all in the back half. Pacing issues are unusual for Robert Berens, so I hope that it’s just an anomaly, and that the episode will make more sense in context with the finale. It may just be that this year, the end of the story works better as a binge watch.

The characters were a mixed bag of good and bad elements. As a person with a strained relationship with her own father, I must say that I really empathized with Lucifer in the episode, right from the beginning. He and Chuck needed desperately to talk, and while both had good points, I found myself on Lucifer’s side. No one likes to be abandoned, and Chuck was indeed a horrible father to all of the angels. Empathizing with Lucifer is a place I never expected myself to be, even with Supernatural. Who could have guessed, way back in season 4, that one day Lucifer would sound like the reasonable being in the room?

I found myself much more ambivalent when it came to the conversation during the fight at the end. Both Amara and Chuck had good points, but I found Chuck swaying me to his side more by default than any convincing dialog. While I sympathized with Amara’s desire not be locked up again, her inconsistent viewpoint and single note characterization over the season meant that I simply didn’t care enough about her to really feel that sorry for her.

I did, however, find the idea that the forces of creation essentially forced Chuck to create everything quite interesting. I can see where that would put a being like Amara at a disadvantage. While Chuck, as a being of light and life, could assist it with the formation of everything, a being like The Darkness would be forever doomed to failure. If all you can do is snuff out the light and consume everything in sight, you are fundamentally incompatible with the forces of creation. If that force is what draws Amara to Dean, like the episode suggests, then Amara should have seen Dean’s resistance coming. Despite the draw, they’ll always be incompatible.

I’m not pleased by the fact that Castiel learned about Chuck being God off screen. He deserves a good therapy session with his creator as well, and while I hold out hope that everyone is alright enough to chat in next episode, I’m sad that it didn’t occur in this one.

Lucifer was definitely less scary of late. He presented himself as more of a hurt teenager then a superior menace, complete with mood swings, sarcasm and sulking in a bedroom to loud rock music. I thought the calmer response after the chat was interesting. That version of Lucifer was actually fairly charming, and gave a hint of what he must have been like before the original mark turned him emo.

I rather liked Clea, the witch. She seemed nice and reasonable, a promising trait for a figure that, by necessity, would be balanced in the middle between the monsters and the hunters. I hoped that we’d see more of her, which is why I’m not pleased at the fact she and her sister witches died during the battle. Sure, people die in big apocalyptic fights on Supernatural, but why was it again just women? Could there have been a male witch involved too? They’ve had them on the show before.

In fact, the only male to die in the episode was the very recently introduced prophet, Donatello. This left me with mixed feelings. On one hand, the incredibly short lifespan of the prophet did explain to me why they introduced him, rather than use Kevin. It would have been horrible to reintroduce Kevin, only to have him die in such a terrible way just one episode later. But on the other hand, Donatello didn’t deserve that either. Why introduce a character just to use him as a celestial version of GPS? At least let the poor guy live a little longer then just three days.

While the characters had some issues, both good and bad, the structure of the episode was entertaining. The inter-cutting of the planning scenes and the recruitment of all the allies was far more interesting than showing each of the scenes by themselves would have been, and I loved how each group bled into the others. I also enjoyed how each one referred to a specific plot-line from the last few years, tying the loose threads left over from each respective storyline into a single plot for the finale.

Ever since they introduced the concept of the Heavenly host in season 4, I’ve been waiting for an on camera fight involving the powers of both major species. I’d expected them to be fighting each other, but this episode showed how that perhaps them working together was just as entertaining. The one-two punch of the massive angel smiting and the cloud of demons was great to watch, and it was clear from Amara’s stumbling around that it was physically effective as well. Similarly, it was a real treat to see all the characters that we’ve either cheered on or rooted against for years putting it all aside to fight a common enemy. Each brought a unique skill to the fight, and it was amusing to watch them try to out-sarcasm each other during the final meeting. I also find it interesting that the fight had actually involved only one group physically on location. It’s not every day that you see a strictly long-distance Battle Royale. Kudos to the demons for being the only ones actually present on the battlefield. 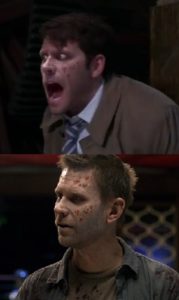 The special effects in this episode were amazing. The powers of each group blended well together and were impressive on screen. Also quite impressive (and rather unsettling) was the presumed death of Lucifer. The effect itself went by so fast that to really appreciate what happened, I had to re-watch it in slow motion. The sparks and light of burning grace coming from his mouth and the fusion of Misha Collins‘s and Mark Pellegrino‘s faces was startling, especially as I recognized the scars that appear on Lucifer’s cheekbones as a makeup effect from the tail end of season 5. I presume that the effect must have been achieved by blending footage from two completely different years together, which has to be difficult, since they have to work with limited images.

The set for the big fight was interesting looking, although we didn’t see much detail from it on screen. Jerry Wanek and the production design team on Supernatural tend to construct greats sets, and it’s a shame that the limits of the small screen don’t allow us to see more of the details. Hopefully, they find additional ways to let us appreciate the sets in the future.

One small detail caught my eye and made me wonder. When the fight begins, the sky outside is dark and cloudy. It’s clearly a night-time fight. But when the fight is over, despite the fight being fairly short, the sun is up. Did they fight at dawn? Or is the light somehow related to the fight itself? The light is an odd shade of red, and the source caught Rowena’s attention. Could fatally attacking God have effected the Sun somehow, and is that what Amara meant by “watching his creation turn to ash”? It’ll be interesting to see if it’s addressed next episode.

Although there were some interesting moments and characters throughout the episode, I can’t say categorically that “We Happy Few” was a great success. It did its job in terms of setting up the plot for the finale and such, but when compared to the penultimate episodes from other seasons, it comes up as kinda middling at best. It feels incomplete. Hopefully, it works better when viewed together with the finale.

Supernatural‘s Season 11 finale, “Alpha and Omega”, airs on May 25th.