This Year’s Outfest May Be Online, But It Goes ALL OUT! 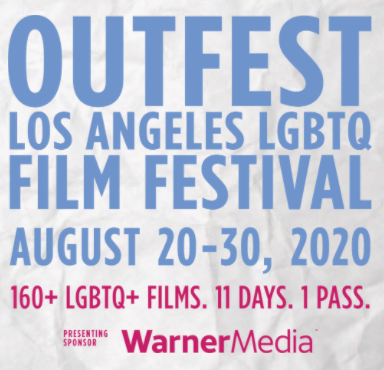 Outfest has reigned supreme as the premiere location to see new and exclusive offerings for and about the LGBTQ+ community. Running from Thursday, August 20th to Sunday, August 30th, Outfest offers 160+ films and 35 world premieres, as well as live concerts and conversations.

We here at The Geekiary love diverse gay cinema and Outfest has outdone itself in terms of diversity. Over 70% of the films are directed by women, trans people, and people of color. They truly represent the future of entertainment. The content is available exclusively through the Outfest app – OutfestNOW – and there are several options for viewing.

You can purchase an all Access Pass for just $59, which gives you access to the entire festival. You can also purchase one of their packages for more selective viewing and there are free options as well. Find more information on their official site: Outfest.org (link).

The real stand out this year was the drive-in experience.

Settled in the mountains of Malibu, the beautiful Calamigos Ranch served as home for the Outfest Drive-in. I went on opening night with a friend and got parked quickly. The movie was streamed through a radio station, which allowed us to control volume, and the screen was a good size and bright. 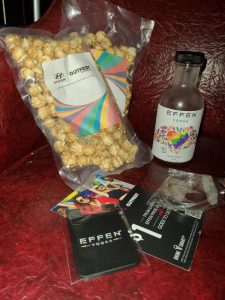 Going in, we received programs that held descriptions of all the films, as well as caramel popcorn! I was able to get an Effen Cocktail Kit provided by Effen Vodka, who has been a long-standing supporter of the LGBTQ+ community. The kit included the cocktail, club soda for mixing, a very cute bottle opener, and other little tchotchkes.

The weather was lovely and the movie was magical. I was so pleased that Outfest was able to put together a fun event where we could be socially distant but still enjoy the show. Even exiting was easy and everything was so well organized. If you’re in the LA area, tickets to the drive-in can be purchased for next weekend at the Outfest Drive-In site.

This year’s Outfest has special categories that showcase the best in fringe talent. From Boys Shorts to Transcendence, just about every facet of the community gets represented. There are even special showcases for Taiwan and Brazil. The Shorts categories broke down even further, showing stories from bears, bikers, and silver-aged community members along with odes to more surreal entries. Here are a few recommendations from different categories:

Narrative Feature: Cicada – Cicada is a traditional love story with untraditional beginnings. It deals with interracial romance, PTSD, and trying to make it despite insurmountable odds. Poignant, yet sweet, this movie goes down smooth.

Gossamer Folds – Set in 1986, Gossamer Folds is on one hand a coming of age film about a young boy moved from the city to the suburb dealing with isolation as his parents’ marriage falls apart. On the other hand, it’s the tale of a young woman who identifies with the young boy until one day she didn’t. She asks the young man Tate the definition of Gossamer and he says something akin to it being very fragile and delicate. Gossamer agrees that is her and while in some ways it’s true we soon see the real Gossamer has grit.

Documentary Feature: House of Cardin – Fashion rules in this documentary that explores how the Cardin brand became. Pierre Cardin was himself a character and the documentary is full of stories from him and his well-known compeers.

Shorts: I had so much fun with the shorts! Today I’m going to recommend Sexpert Advice, the story of a young man who is very excited about a sexual conquest, but also very nervous. He employs a “Sex Expert” to give him advice about how to make the night a success. Charming and sweet with just a touch of sauciness to round it out, this short had me laughing in awww-ing in equal measure.

Also debuting during the festival will be The Outcast featuring talent like Laverne Cox, Jonathan Groff, John Cameron Mitchell, and Justin Simien. 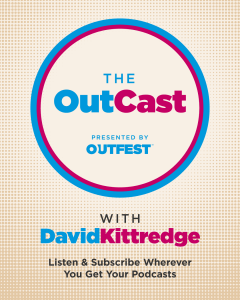 Which Outfest films look good to you? If you have any recommendations for one you’d like me to review, please drop a note in the comments!