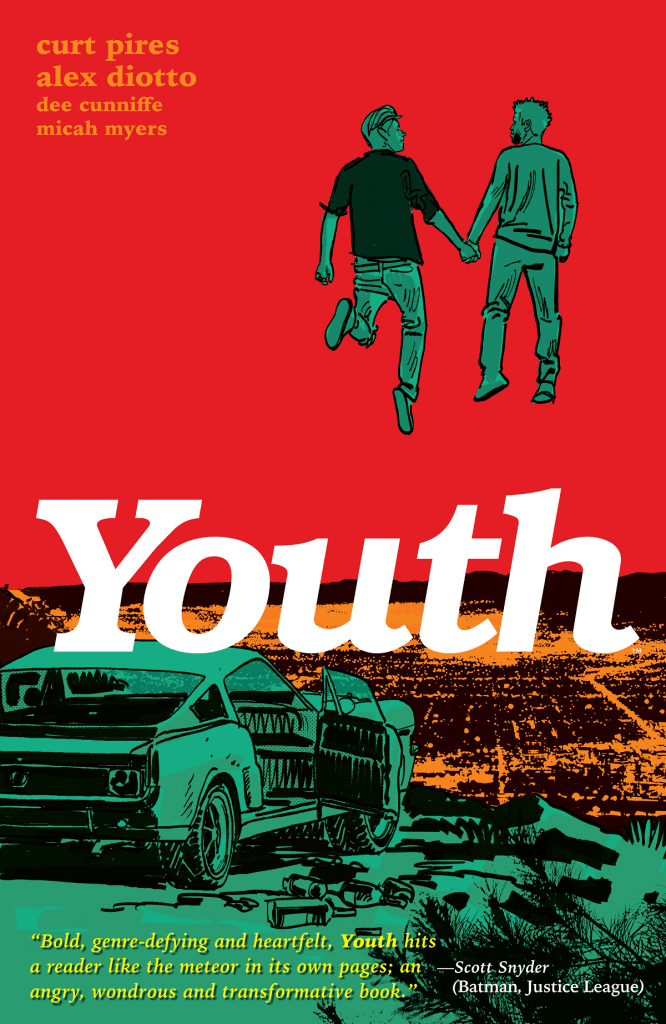 According to the press release, the current partnership will make select titles from the creator-owned line of comiXology Originals available in print for the first time. Fans will be able to grab said titles from comic shops, bookstores, and libraries. Commencing in Spring 2021, you can look forward to the release of the paperback editions of the Eisner Award winner Afterlift, Breaklands, Youth, and The Black Ghost.

“The ComiXology Originals line is of the highest quality and diverse in its storytelling and talent,” said Dark Horse publisher and CEO Mike Richardson. “ComiXology’s line of creator-owned comics sits perfectly alongside the acclaimed creator-owned graphic novels that are the bedrock of Dark Horse Comics.”

“We were always hopeful comiXology Originals books would get into readers’ hands via comics retailers and book stores, and Dark Horse is a terrific collaborator to work with to do so, with an unmatched history of supporting creator-owned projects alongside unmatched distribution expertise. This deal fortifies the ability for these stories to reach customers like never before,” said David Steinberger, comiXology Co-Founder, and CEO. “We’re thrilled to be working with Dark Horse.”

While Dark Horse Comics will handle distribution and fulfillment through Diamond Comic Distributors for comic shops and Penguin Random House for bookstores, ComiXology Originals will remain available to be read digitally for members of Amazon Prime, Kindle Unlimited, and comiXology Unlimited and for purchase on Kindle and comiXology.

Here’s what you should know about the upcoming physical releases! 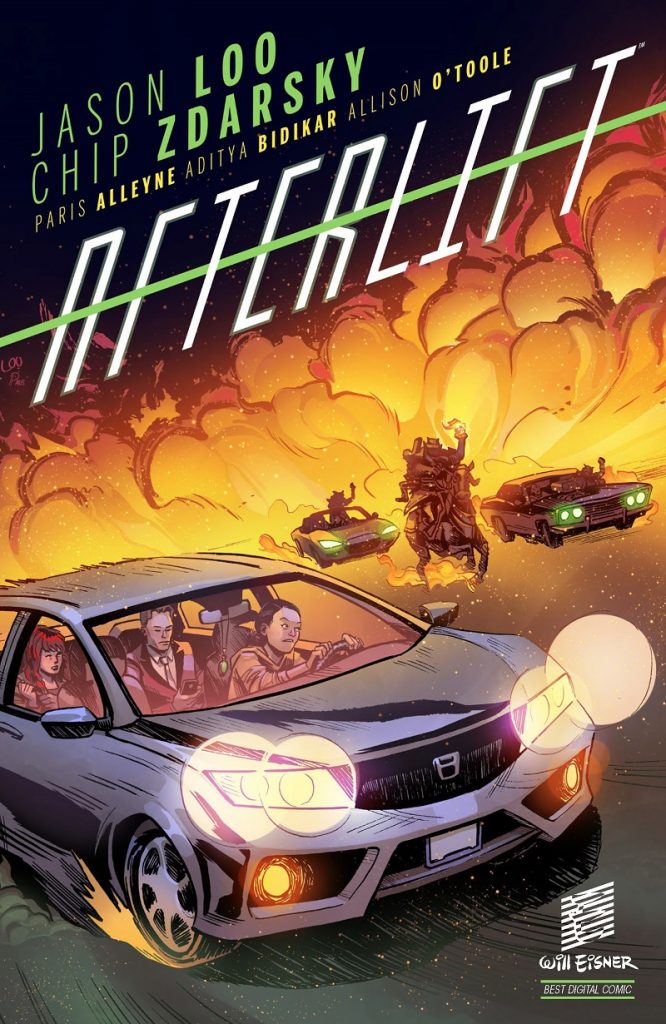 It has been written by Eisner Award-winner Chip Zdarsky (White Tress), with art by Jason Loo (The Pitiful Human-Lizard), colors by Paris Alleyne, letters by Aditya Bidikar and edited by Allison O’Toole. Afterlift is a 2020 Eisner Award-winning series.

In AFTERLIFT, Janice Chen is adrift. She quits her day job in finance and signs up to be a driver on a ride-sharing app. But what was at first a mundane but enjoyable way to pass the time takes a terrible turn when a mysterious passenger updates his ride with a very final destination: Hell.

For those wondering, yes, I’ve read Afterlift, and yes, it has queer representation. 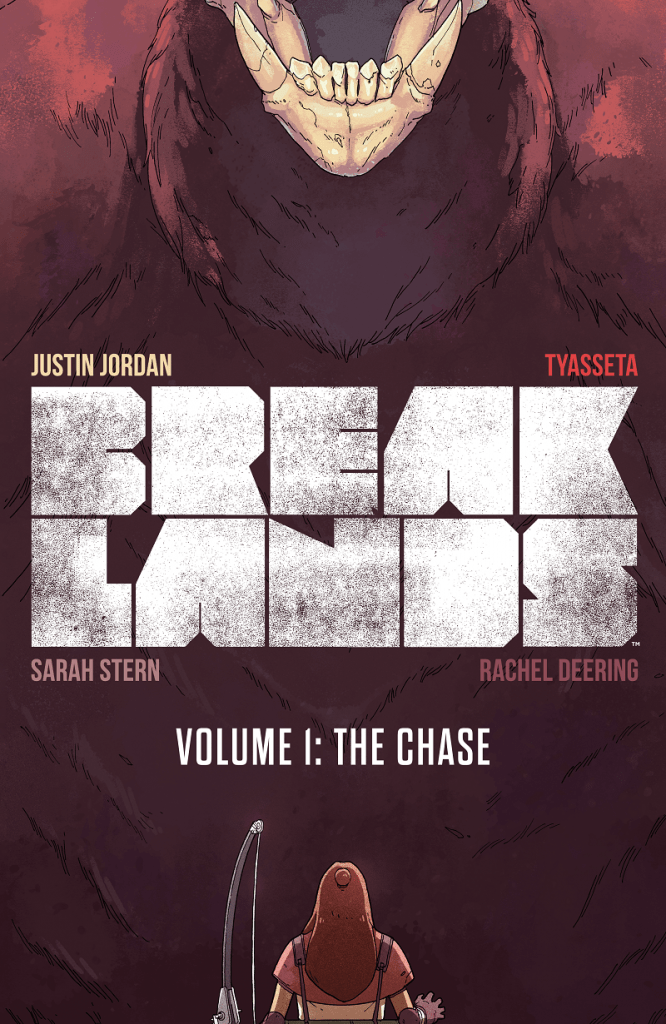 It has been written by Justin Jordan with art by Tyasseta, colors by Sarah Stern, and letters by Rachel Deering.

Set 150 years after humanity developed psychic powers and ended the world as we know it, a new world has emerged. Everyone has powers. Some powers, like the ability to light a match, are modest. But some powers—like the ability to reshape the world—are both vast and dangerous. Kasa Fain is different. She doesn’t possess powers. Kasa is an outsider, a teenager who has been in hiding, until the day her younger brother is kidnapped and everything changes.

This title has been written by Curt Pires with art by Alex Diotto, the co-creators of the acclaimed comic Olympia. It features colors by Dee Cunniffe and lettering by Micah Myers.

In YOUTH, Franklin and River struggle to navigate family, friends, high school, work, drugs, and all the pressures of growing up. As a queer couple, they yearn to escape their lives in a small, bigoted Midwest town. They steal River’s stepfather’s Mustang and hit the road. Their destination? California. But along the way, the car breaks down. They meet some kids who are travelling the country, partying, and attempting to find themselves. They party some more. . . . And soon everything changes.

If you’re interested in picking up a story that features young and messy queer superheroes, this series is for you. I enjoyed reviewing this title (you can read my review here). Of course, I’m looking forward to reading the sequel to Youth. With how the series ended, I have to know what’s going to happen next!

This comic series is in development as an original TV show with Amazon Studios. As far as I’m concerned, that’s very exciting. The world needs more queer-led superhero fare. However, I am wondering how the TV show will handle the messiness. Certain viewers (including vocal-fandom members) don’t appreciate live-action media that tends to make it’s way down the ‘queer-tropes’ checklist and plays a role in perpetuating problematic queer stereotypes. It caused a lot of backlash for The CW’s Roswell, New Mexico.

On the bright side, The Old Gaurd, on Netflix, was a step in the right direction when it comes to queer beings with superpowers. The online fandom involving queer characters Joe, Nicky, and Andy continues to grow at an impressive rate.

Last year, we wrote an article about bisexual tropes, if you want to read it. 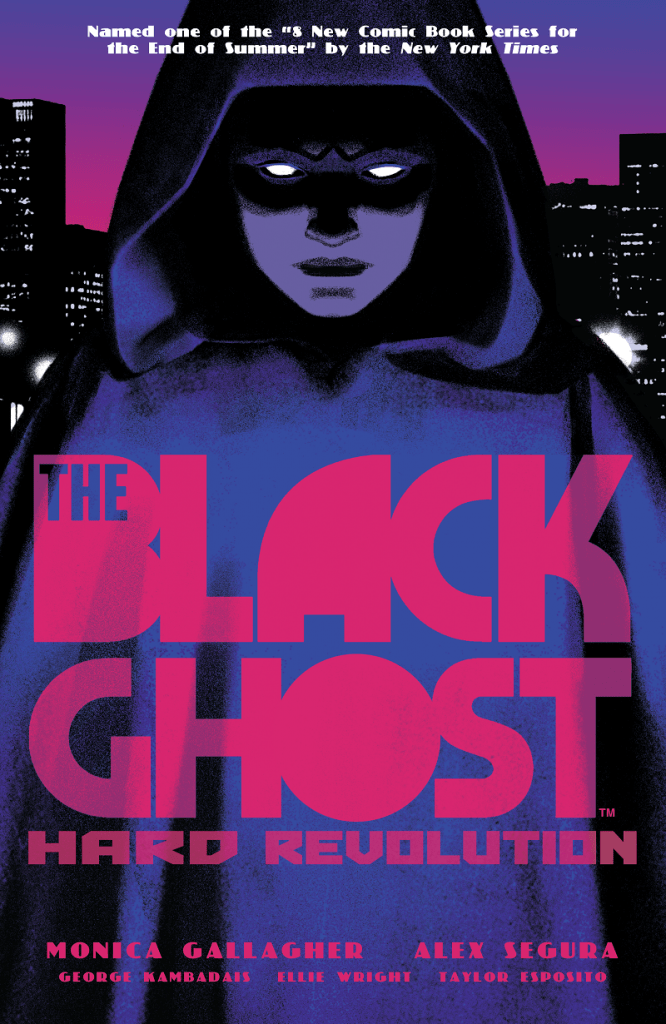 The Black Ghost Volume One (issues 1-5)

This story has been co-written by Anthony Award-nominated novelist Alex Segura and acclaimed writer Monica Gallagher, with art by George Kambadais, colors by Ellie Wright, lettering by Taylor Esposito and edited by Greg Lockard.

The Black Ghost is a modern take on the urban vigilante story. Lara Dominguez is a journalist chasing that one, big story. After a stint in the Middle East, the alcoholic reporter moves from her hometown of Miami to Creighton – a mid-Atlantic city that’s seen better days. She needs a huge, viral scoop that’ll send her into the journalistic stratosphere. Her target? Uncovering the identity of The Black Ghost – a masked vigilante trying to take down the wealthy oligarchs carving up the fading metropolis. But as she searches for the breakthrough story she desperately needs, Lara will have to navigate the corruption of her adopted city, the uncertainties of virtue, and her own personal demons.

More comiXology Originals print editions will be announced at a later date.

“These are high caliber comics that will resonate not only in the comic shop stores and bookstores, but also with libraries across the country,” said Mark Bernardi, Vice President of Book Trade and Digital Sales at Dark Horse Comics.

Have you read any of the titles that will be released physically by Dark Horse Comics next year?

Previous:This Year’s Outfest May Be Online, But It Goes ALL OUT!