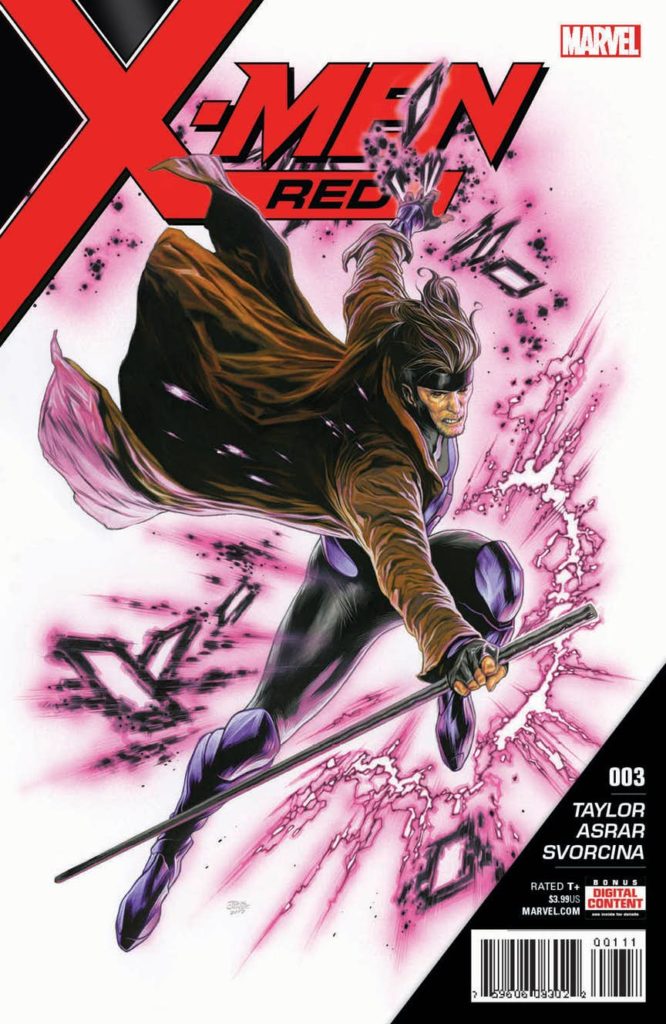 Jean Grey will be adding a fan-favorite mutant to her team in X-Men: Red Issue 3. While the debut issue will release on February 7, 2018, I’m looking forward to Gambit’s role.

It seems Jean Grey will have a very busy 2018. Her return is currently in progress inside the pages of Phoenix Resurrection: The Return of Jean Grey. She’ll then lead her own team of mutants in X-Men: Red next month. Furthermore, the X-Men: Dark Phoenix film, which has a November 2, 2018, release date, will also revolve around the iconic red-haired character.

The roster of X-Men: Red will include Namor, Gentle, Nightcrawler, Laura Kinney, Honey Badger, and a new character by the name Trinary. Issue 3 will add Gambit to the series on April 4, 2018.

“Things have heated up with attacks on mutants across the globe,” editor Mark Paniccia said in a statement. “We know that one of the X-Men’s most powerful villains is behind the chaos, but will Jean, Nightcrawler, All-New Wolverine and Honey Badger have a chance to stop the next deadly wave? A favorite Cajun mutant might be able to tip the scales in their favor… but at what cost?”

Tom Taylor serves as the series’ writer with Mahmud Asrar as its artist. Gambit can also be seen in the Rogue & Gambit miniseries being written by Kelly Thomspon and illustrated by Pere Perez. The first issue has been released.

Phoenix Resurrection: The Return of Jean Grey Issue 2 was released today. The series is written by Matthew Rosenberg.

A light in the darkness is not always welcome. Kitty Pryde, Old Man Logan and Cyclops are leading teams of X-Men all across the globe, chasing events connected to the Phoenix. But with teammates disappearing and familiar enemies returning, the X-Men are fighting a losing battle. Beast doesn’t know how or what shape it will take, but he knows they are running out of time before the Phoenix makes its true presence known. Meanwhile, a young woman named Jean is starting to go insane in her peaceful, suburban life. Nightmares and daydreams are spilling over into the world and revealing cracks in her reality. Jean’s life and everything in it may just be a facade, but made by who? And why? Jean needs to escape. The X-Men need to stop the cycle of death the Phoenix brings. Their worlds will violently collide as Jean searches for an opening and the X-Men fight for closure. But when they are brought together, will the X-Men be reunited with their long-lost teammate – or something darker?

Are you a fan of Jean Grey? Are you excited about the original Jean coming back? What do you think will happen to the time-displaced young Jean Grey? Let us know.

Previous:Forest of a Thousand Lanterns: Delightfully Dark
Next: Get Ready For “The Alienist: From Sketchbook to Screen Exhibit” on January 13, 2018