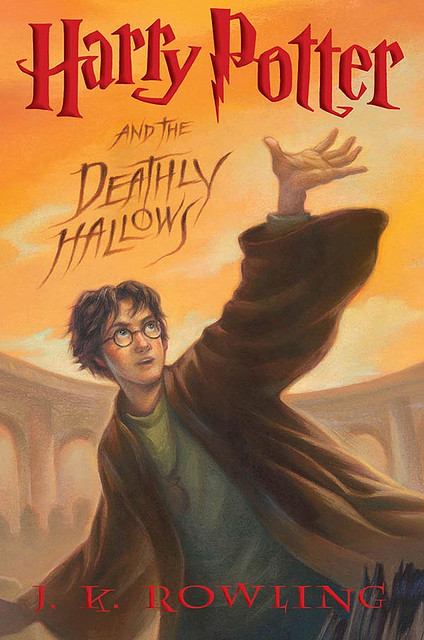 Seven years ago today, we said goodbye to Harry Potter.

Well, not really. We still had three more films to look forward to and there was always fanfiction, fanart, and the recent news that there would be a Harry Potter theme park at Universal Studios in Florida.

It seemed impossible to imagine a world without Harry, Ron, and Hermione. It seemed even more impossible that 15 million of us were holding (for all we knew) the last novel by J.K. Rowling and we were about to visit Hogwarts for the last time. But we were.

If you were anything like me, you got a hold of your own precious copy of Harry Potter and the Deathly Hallows at midnight and proceeded to devour it within 24 hours of its release. If you were anything like me, seven years ago you were rushing through the seventh novel staring a gangly, not very smart, and endearing bespectacled teenager just to see who died, who made it, and if your guesses of the identities of the remaining Horcruxes were correct. And, seven-years-ago-you is probably sobbing somewhere right now, horrified at the bloodbath our beloved J.K. Rowling had unleashed at Hogwarts, where we had always felt safe.

Seven years have passed and that means there are kids in school right now who are younger than the last Harry Potter novel. That means most of us who read those books as children are adults now. I’m not saying this in an effort to depress you. Instead, I think it’s wonderful. That means there’s a whole new generation of children who are about to embark on a grand adventure. Maybe they weren’t there for the midnight release parties or the film countdowns (and I am sorry for that because those moments were the closest we Muggles got to experiencing magic), but Harry is still there. And we were right, seven years ago.

After several years of training in literary criticism, I just can’t bring myself to truly critique Harry Potter and the Deathly Hallows. The rational part of me knows it’s not the best-written novel in the series, that is relies a bit too heavily on consequence and deus ex machina moments and that epilogue (I still mockingly start conversations with my friends by placing a hand on their shoulder and paraphrasing, “Albus Severus, you were named after two of the bravest men I ever knew”).

But the part of me that fell in love with this world and the people in it knows better. I’m not saying that we shouldn’t critique and analyze things we love. We absolutely should. I simply don’t have the heart to do it to a book that was more like an experience. I actually spent the entire Harry Potter series disliking Harry as a character. He was simply a conduit for me to read about the other, more interesting characters in the series. But it wasn’t until Chapter 34, “The Forest Again,” did I realize just how much I had grown to love this character.

As he walked to his death, I panicked, not knowing how I could survive in a world without him. Luckily (or a little too conveniently), J.K. Rowling didn’t make us face that cold world. Instead, Harry became a Christ figure, and he returned to us, allowing us to imagine his later adventures as a middle-aged father and husband.

So did we really say goodbye to Harry seven years ago? For those of us on Pottermore, we certainly didn’t and obviously, J.K. Rowling hasn’t either. We could try to analyze what is it about this boy and his friends that makes us want to never leave him but for my money, it’s simply love and the apparently universal truth that the world would be a lot less colorful without him in it.

1 thought on “Revisiting The Deathly Hallows After 7 Years”