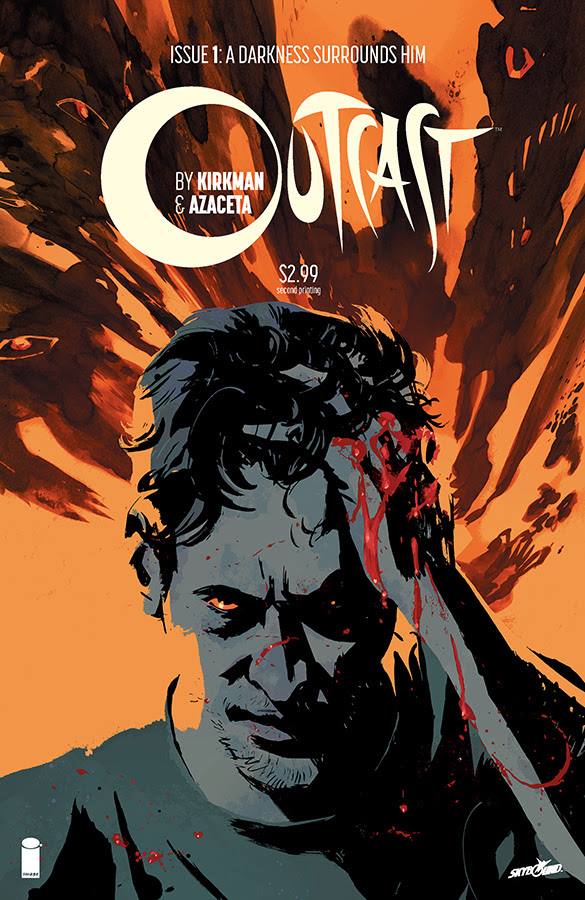 Walking Dead author/Image Comics partner Robert Kirkman remains a hot property. His frequent TV and radio appearances have made him one of comics’ few household names, along with Stan Lee, Jack Kirby, and Kevin Smith.

Despite being a writer and producer on The Walking Dead TV series, publishing and developing other creators’ properties through his Skybound imprint at Image, and (until recently) co-writer of Image’s Thief of Thieves, he’s found time to start another comics series: Outcast, with artist Paul Azaceta. The first issue drops today, but the entire print run is already sold out at the distributor level (in other words, unavailable for reorder), so Image is rushing a 2nd printing to be in stores the same date as Outcast #2.

It wouldn’t surprise me if that isn’t enough to meet demand, either: Thief of Thieves #1 had 5 (!) printings a couple years ago before the first book collection was released.

I met Kirkman at Comic-Con last year. He’s a super-nice guy. I’d told him that it turns out I’ve known relatives of another Walking Dead TV producer for decades. Small world.

Robert Kirkman, creator of worldwide entertainment phenomenon THE WALKING DEAD, teams up with Paul Azaceta for OUTCAST, the first new series written by Kirkman himself in three years and since the premiere of the AMC adaptation of THE WALKING DEAD which went on to become cable’s most successful and most-watched television show. OUTCAST BY KIRKMAN & AZACETA has sold out completely before even hitting its release date.

OUTCAST BY KIRKMAN & AZACETA #1, debuting this week in a special double-sized first issue for just $2.99, introduces Kyle Barnes, his tragic past, and his unusual gift. Kirkman and Azaceta are zeroing in on demonic possession in this all-new dark and suspenseful series. This eerie tale blends the supernatural with a realistic setting, a characteristic of Kirkman’s storytelling that earned him early praise and success with THE WALKING DEAD. OUTCAST BY KIRKMAN & AZACETA’s tone echoes the grave, dread-building suspense of The Exorcist and The Sixth Sense while developing a complicated and tormented protagonist evocative of The Ghost Whisperer. Demons are here, demons are real, and Barnes is at the center of it all.

The demand for the series is so high that it has already sold out at the distributor level, the latest in a series of fan-favorite debuts from Image Comics and Skybound. This hotly anticipated #1 issue will be rushed to a second printing in order to meet customer demand and satiate the droves of THE WALKING DEAD fans in search of the next great comic. For fans of digital editions, OUTCAST BY KIRKMAN & AZACETA #1 remains available for purchase across all platforms, including the Image Comics website (imagecomics.com) the official Image Comics iOS app, Comixology’s website (comixology.com), iOS, Android, and Google Play.

“The Walking Dead was grown out of the direct market, everything it’s gone on to become wouldn’t have been possible without support from the comic book retailer community,” said Kirkman. “To see Outcast selling out ahead of release like this was clearly unexpected, but it continues a reassuring trend that could see many more homegrown phenomenon that will keep this industry we love vibrant for centuries to come.”

“If there’s one thing I’ve learned about Robert Kirkman over the decade plus I’ve known him, it’s to expect not just the unexpected, but everything from the twisted to the sublime,” said Eric Stephenson, Publisher at Image Comics. “Robert is constantly developing as a writer, finding new ways to get under the skin of his characters and the ever-growing audience that loves them, and Outcast is probably his most adventurous work yet. Even if you think you know what he has in store for you, this book is going to both shock and scare you.”

This second printing of OUTCAST BY KIRKMAN & AZACETA (Diamond Code MAY148172) will be available on 7/30.