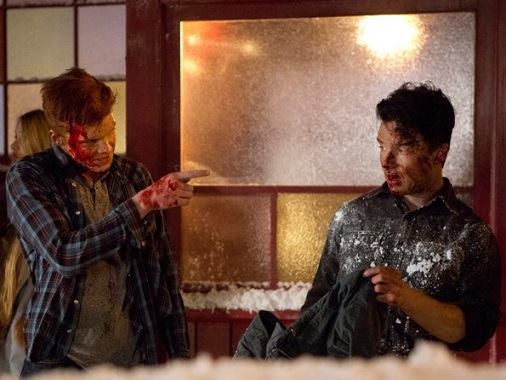 Fact: Noel Fisher is a gift!  He was clearly the star of this episode, and while Gallavich isn’t my favorite couple (Veronica boinking Kev with the strap-on in the series premiere pretty much sealed the deal there), I am all too willing to gush and analyze this couple’s interactions to pieces!  I’m really impressed with Mickey’s growth this season, Noel Fisher being one of the stand-out performances.  Daunting though it may be, I’m going to try and keep my enthusiasm in check, or else this review would never end.  But enough of me bumping my gums; let’s jump into my thoughts on “Emily”!

That roar you heard during the episode?  Don’t worry, that was just the Gallavich shippers losing their collective minds.  If I had to give Mickey and Ian one of those couple songs, it would have to be “Fairytale of New York” by The Pogues featuring Kirsty MacColl.  Want to know why?  Keep reading.  At the beginning of the episode, we found Mickey getting ready for his son’s christening.  Ian wanted to come with him, but Mickey shot that idea down quick, fast, and in a hurry.  It may seem mean to some, but I can understand where Mickey was coming from.  He’s on constant uneven ground when it comes to Svetlana, and with her breathing fire down his neck, he doesn’t want to add gasoline to said fire by throwing Ian into the mix.  Ian showed up regardless, but he wasn’t the only late arrival.  Terry, fresh out of jail, showed up just in time for the reception at the Alibi Room.  That was where things are very interesting.  I couldn’t help but feel sympathy for Mickey, who looked like he was seconds away from having a total nervous breakdown.  His dad is there, who Mickey has to pretend to be happy to see, and then there’s Svetlana and Ian, both haranguing him and issuing threats and ultimatums.  Svetlana kept threatening Mickey with Terry, but he shut that down pronto, pretty much saying in so many words that things could be worse for her and to be thankful for what she’s got.  Side note: Please tell me I wasn’t the only one annoyed by Mandy’s absence?  Given what transpired, I felt like leaving her out of it was a disservice to the character that pretty much reunited this star-crossed pair!

Ian became very dark and moody, which led to a fascinating conversation between the two.  Ian insisted that Mickey was living a lie because everyone didn’t know he was gay.  When Mickey asked what difference it made if people didn’t know, Ian said it was because Mickey wasn’t free.  But Mickey had the best comeback of all: “Ian, what you and I do makes me free.  Not what these ***holes know.”  I think that’s the real beauty of Mickey Milkovich and what I love about him.  He’s not one of those gay characters that are loud and proud or march in parades, demanding his equal rights.  He’s a thug and a pimp who just happens to prefer the company of other dudes.  His sexuality doesn’t define him, and he didn’t necessarily need some big coming out.  But he got one anyway when Ian issued an ultimatum, which was what that was, let’s be honest here.  Do I think Ian manipulated Mickey into coming out?  Yes, I do.  But…do I think Ian had some justification in doing so?  Yes, I do.  Ian has had enough of being someone’s dirty little secret.  It was that way with Kash, Jimmy/Steve’s dad, and yes, even Mickey.  He wanted to be able to walk around with the guy he loves without shame or consequence.  So he threatened to leave, and Mickey, not wanting to lose Ian again, comes out in a way that only Mickey Milkovich could.  And you know what the best part was?  Everyone in the bar was largely unaffected and went back to dancing with their Russian hookers…except for Terry.  As expected, the elder Milkovich lost his mind and a brawl broke out in the bar with Ian jumping in to defend Mickey.  The cops were called, and the father/son duo were slammed into opposing cop car hoods where Mickey proceeded to colorfully fill in his dear old dad on what he and Ian had been up to while he was away.  Terry was hauled back to jail, but Mickey was let go, as his arresting officer claimed to be too tired to deal with the paperwork involved in processing Mickey…paperwork that would keep the man away from his husband Carlos.  I think the entire Gallavich fandom would love to send this man and Carlos a big old bouquet of roses with their eternal gratitude!

Would you believe that other stuff happened in this episode as well?  Well, as Naruto would shout: Believe it!  Lip continued to juggle school with taking care of his siblings while Fiona was locked up for 90 days.  He tried to blow off dinner with Amanda’s parents, citing that at the time he agreed to it, he didn’t anticipate his sister going off the deep end.  Amanda still got pissed and called him a liar, prompting him to invite her and parents over to his place for leftover lasagna.  More surprises awaited Lip at home, as Carl invited his girlfriend(?) Bonnie and her horde of siblings over.  Let it never be said that Lip doesn’t know how to roll with the punches, as he let the kids stay to add to the effect of horrifying Amanda’s later-to-be-revealed adoptive parents.  Hearing a knock at the door, he grabbed a beer, thinking it was Amanda and her parents, and found a social worker standing there.  This guy just can’t catch a break!  You could see the slight panic in his eyes as the woman went through the house and ticked off defaults, from creaky stairs to lack of alarms in the house.  As I was watching, I was ranting at the woman, “You got the money for him to make all those repairs, honey?”  I understand she was doing her job, but geez! 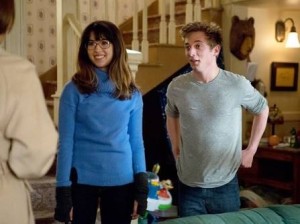 She stuck around, hovering around the edges, while Amanda and her parents arrived for dinner.  Lip laid the hood rat act on extra thick, not even bothering to hide why Fiona was in jail.  He even kissed Amanda when he found out that he had passed all of his exams.  Later her parents offered Lip ten grand to stop seeing her, which he accepted and told Amanda about.  But before anyone could grab their pitchforks and “Lip is a douche” signs, it was revealed to be a scam set up by Amanda.  She even chided him for not holding out for more, her parents apparently shelling out fifty grand to one undesirable suitor.  This money will definitely help keep the gang afloat while Fiona is doing time, as they have no real source of income.  I love these two together!  Amanda doesn’t fall for Lip’s games and keeps him in line, which is certainly helping him academically.  I’m excited to see if she will stick around in season five.

The situation with the social worker turned out positively as well.  The woman was impressed with Lip’s willingness to take care of total strangers and even clued him in on when her next “surprise” visit would be.  Thanks!  Side note: I adored how after sending Fiona a photo and a text (since when do all the Gallaghers have sweet phones) saying he and Bonnie were crashing in her bed, Carl took off his shirt but Bonnie said she didn’t want to have sex.  So Carl, this little adorable dude, simply put his shirt back on and smelled her hair with a smile.  This is how you treat a person you care about: with respect! 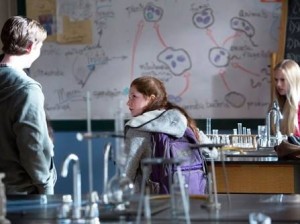 Debbie had another unfortunate run-in with Matty’s girlfriend.  A guy in Debbie’s science class started showing interest in her, and they had some cute interactions while they dissected a frog.  Later he drew her picture Jack Dawson style, but unfortunately the nudity came with a cost.  They went into a stairwell and kissed, where he proceeded to unbutton her shirt.  She got nervous, but he calmed her down by saying that he would take her to an upcoming dance.  Just as he finished unbuttoning her shirt, a flood of teens leaned over the railings and began taking pictures and posted them on Facebook, the guy turning out to be Matty’s girlfriend’s brother.  Matty came by Debbie’s house later and told Debbie that he had dumped the chick, saying Debbie did the things she did because she was a kid and his ex shouldn’t have done what she did because she was an adult.  Debbie got a little miffed by the kid comment (sorry, the truth hurts), but they made up, Matty saying he would be honored to take Debbie to the dance.  While their relationship may be inappropriate, I still think Matty is a decent guy.  He’s always treated Debbie with respect and has never condescended to her, which I think she really appreciates.

Frank received a new liver, but when he woke up (courtesy of a punch in the balls from Carl), he had what his doctor described as a 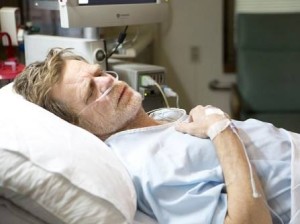 post-operative delirium.  He thought Sammi was Debbie, Carl was Lip, Shelia was his mother (and through that, he revealed that he had been sexually abused by Pam), and his hospital roommate, a little girl named Emily, was Fiona.  Shelia and Sammi started really butting heads on how best to take care of Frank, but that wasn’t where the heart of the Frank scenes laid.  Emily was in the hospital for cardiomyopathy, a disease of the heart muscle.  Her mom was the only one with her, as her dad split when his daughter got sick.  When the little girl and Frank were alone, he, thinking she was Fiona, apologized to her for abandoning her and Lip while he and Monica went to score a fix with their drug dealer.  He promised to be a better dad in the future and take her to Claire’s to get her ears pierced in the morning.  He then reached out to her and took her little hand, saying he was glad she was there with him.  This little girl, who had been abandoned by her own daddy, didn’t question it; she just took his hand and said, “Me too, Daddy.”  As someone who has a very complicated relationship with her father, these scenes hit me like a punch in the guts.  Even now as I write this, I keep having to pause to wipe away stray tears.  Unfortunately Emily passed away in the next scene, highlighting just how unfair it is that Frank, a truly terrible person, got a transplant while she didn’t.  But at least in his altered state, he was able to give a little girl some peace.

Next weekend is the big season finale!  In the preview, Ian looked like he was heading down into a dark place, Frank was back to his old tricks, and Fiona was struggling in lock up.  They don’t appear to be doing a time jump, so I’m curious about what the circumstances will be that allow Fiona to be released from jail.  I’m pretty excited because Jeffery Dean Morgan will be guest starring, and I have all of my fingers and toes crossed in hopes that this will lead to a reoccurring role in season five.

Before I get ahead of myself and continue to pound away at this keyboard, what were your thoughts on “Emily”?  As far as penultimate episodes go, this one was pretty spectacular and has me bouncing in my seat for next week.  Whatever your thoughts are, comment below and thank you for reading!