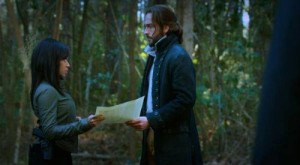 The breakout hit of FOX’s new lineup had its season finale last night, much to the disappointment of its devoted fans. While we have to wait until Fall 2014 to revisit Sleepy Hollow and its demon-battling inhabitants, the two-hour finale provided plenty of laughs, scares, battle sequences, jaw-dropping plot twists, and a major cliffhanger.

The finale’s strength lay in the complex relationships between the dynamic characters. The heart of Sleepy Hollow can be found in family, as corny as that may sound: Abbie and Jenny’s tense and fragile new friendship, Ichabod’s devotion to Katrina, and Captain Irving’s intense love for his daughter and willingness to protect her at all costs. All three of these relationships have played vital roles in Sleepy Hollow’s first season and they came to a head in the finale.

In terms of the actual supernatural plot, I’m afraid the first hour of the Sleepy Hollow finale took itself straight into National Treasure territory, complete with booby-trapped secret graves, mysterious clues on documents from the Founding Fathers, and an undead George Washington. Ok, that wasn’t in National Treasure but it as over-the-top and ridiculous as anything else I’ve seen in a recent Nicolas Cage movie. 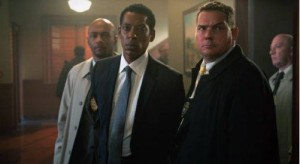 I’m not sure if the first hour was supposed to be played completely for laughs since it featured a rather heartbreaking storyline featuring fan-favorite Captain Irving and his daughter. In an effort to protect his daughter, Irving confesses to a murder he did not do. Since the entire season has featured the subplot of Irving trying to be a better father, this moment was really moving. It also poses difficulties for our heroes, as he is the only member of the Sleepy Hollow police department besides Abbie who is aware of the apocalyptic troubles they face.

It also featured a disturbing return by the undead Andy who slowly becomes even more controlled by Moloch. In a move straight out of a sci-fi film, Andy is transformed into an apparent half-human half-insect creature as punishment by Moloch and sent to stop Ichabod and Abbie at Washington’s secret grave. The make-up alone was beautifully done and was enough to distract the viewer from the fact that all Andy seems to do is push our heroes towards Moloch and then repent and try to help the two.

The adventure-filled and often times comedic tone of the first half all but disappeared in the more serious (and better) second half of the finale. Unfortunately, Irving and Sleepy Hollow as a whole was sort of pushed to the wayside as Abbie and Ichabod discover how to travel to Purgatory and release Katrina. It also featured a poignant scene between the sisters, Abbie and Jenny, in which they reveal how much they need one another and Jenny makes Abbie promise to come back to her. For sisters who were literally pointing guns at each other a few episodes ago, this moment was very moving.

The highlight of this second half, however, was definitely Henry Parrish, the Sin-Eater from earlier 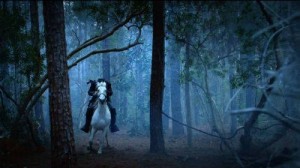 episodes. He effortlessly puts all the wheels in motion for the climax by revealing disturbing dreams featuring our big baddie, Moloch. Along with Jenny’s guidance, our heroes realize that second of the four horsemen of the apocalypse, War, is coming to Sleepy Hollow.

As a horror fan, the trip to Purgatory was exactly what I wanted: it was creepy, disturbing, and rather beautiful. Ichabod and Abbie first faced dreamlike temptations in which loved ones from their pasts (Ichabod’s father and Abbie’s mentor, Corbin) are back and implore them to stay. It’s only by remembering their own bond that Ichabod and Abbie are able to break free and end up in Purgatory’s apparent gathering place, which features a faceless sobbing woman, a man missing limbs crawling on the ground, and a creepy piano player. It was awesome.

For Ichabbie fans, I’m sure the fact that Abbie sacrificed herself for Katrina to return to the world of the living with Ichabod was infuriating. Ichabod does promise to return and save Abbie, though I rather think Abbie is perfectly able to save herself as evidenced by her battle with Moloch and her determination to leave Purgatory and help Ichabod when she discovers the truth about Parrish.

The climax of the episode featured the awesome plot twist that Parrish is Ichabod and Katrina’s resurrected son, Jeremy and the horseman, War. I definitely did not see that coming and was equally upset (no, I liked you, Henry!) and excited because this means we’ll be seeing a lot more of this complex character.

The battle between good and evil has become even more personal in Sleepy Hollow and now that our heroes are separated: Abbie still in purgatory and Ichabod trapped in Jeremy’s former grave, what mayhem could befall this town and the world? Even our secondary heroes, Irving and Jenny, are incapacitated by the conclusion of the episode and the cliffhanger seems to imply that all is lost.

So what do you think about last night’s episode?

Should Abbie have stayed in Purgatory for Katrina’s release?

Which relationship was your favorite to watch unfold this season?

Were you expecting the plot twist or were you like me and went, “Oh my God, no!” when Parrish revealed his true self?

Tell us what you think!