“Something is Killing the Children” Issue 1 Review: Queer. Scary. A Must-Read! 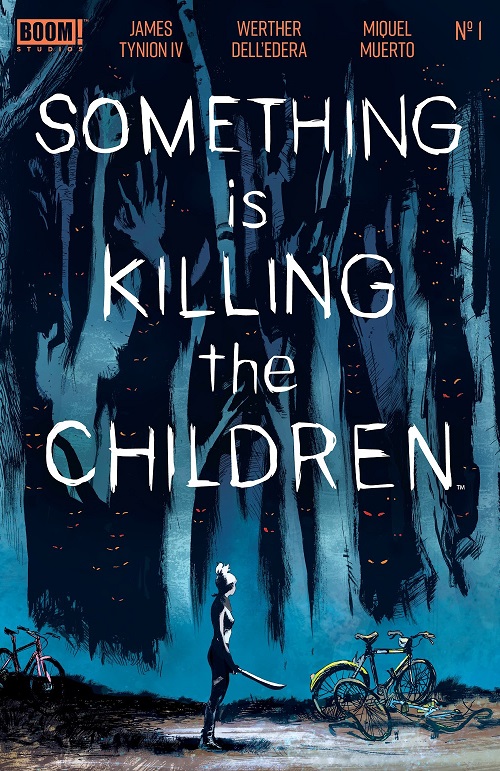 Something is Killing the Children Issue 1 (Image: BOOM! Studios)

There’s a whole lot happening in Something is Killing the Children Issue 1 (The Angel of Archer’s Peak – Part One) and I’m here for it. I’m not sure what unique perspective writer James Tynion IV will bring forward, but considering his track record, the current story is going to an enjoyable one.

If you’re into horror and kids being killed (the art won’t hide any of the gore), then Something is Killing the Children is for you. I decided to pick it up this week because BOOM! is known to publish queer-centric stories and James Tynion IV always delivers (I recommend you pick up his Backstagers series). So, I knew there was going to be something queer in his latest comic book, too. Also, we need more queer content in the horror genre; especially the kind where queer characters aren’t the first to be murdered.

The lead of the story is a kid named James. I’m not sure how deliberate it was on Tynion’s part to name the lead after himself. There’s also some artistic resemblance. Both are queer, too. So, I wouldn’t be surprised if Tynion is going for something deeper with little James.

As for the story, it’s set in Archer’s Peak. James is the sole survivor of a monster attack. He saw his friends (and likely his crush) being brutally murdered. Other children have been killed, too. There are many things James has to deal with. No one believes his monster story. He’s being bullied at school for the deaths of his friends. He’s also trying to come to terms with his sexuality. There’s a monster hunter who seeks him out. As I said, a whole lot happens in the first issue, and I’m ready for the ride.

The monster hunter is named Erica Slaughter (I learned that from Tynion’s Twitter). She has experience with killing such beasts. I’m looking forward to seeing her take down the one James saw.

We don’t know much about the creature, yet. Why is it killing children? Does it hunt them or waits for kids to enter its territory? Are we dealing with something supernatural? A science experiment? Both?

I mean, it’s not something new – Stranger Things being the most recent popular example. However, Tynion is able to suck you into his dark and scary world from the first panel. I’m very interested to know what happens next. The art by Werther Dell’edera is incredibly appealing and goes perfectly with the story’s tone. Miquel Muerto’s colors bring everything together. The way the panels offer us closeups of the characters to the double-paged spreads, it’s all amazing. The panels seem to have a claustrophobic feel to them which helps amplify the horror that unfolds.

Of course, there are parallels being drawn between the monsters that live in the dark and the ones we encounter in the normal world. There are also personal demons living in our thoughts. The bullying scene is sure to resonate with numerous readers.

Again, I’m not sure if Tynion is sharing his personal experience (to some degree), but there’s surely something going on in the narrative. I think we should get ready for a well-written story that addresses numerous themes including trauma, sexuality, fear, and such.

Previous:“Deadly Premonition 2: A Blessing in Disguise” Announced for 2020!
Next: WBTV Returns to NYCC with Batwoman, Watchmen, Riverdale, and More