Could The ‘Sonic the Hedgehog’ Movie Actually Slay At The Box Office?

Superfans are ripping into the new Sonic design- but is this part of Paramount’s overall strategy? There’s a decent possibility Sonic the Hedgehog will actually kill it at the box office.

Despite the horror of Sonic fans everywhere, there’s a pretty good chance Sonic the Hedgehog will do great in theaters. Paramount’s strategy has the movie positioned for a respectable- maybe even great- profit. There’s 4 main areas where I think they’ve made really smart choices. 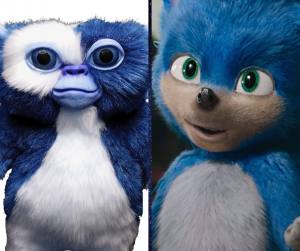 Do not feed after midnight, do not get wet, hide your jewelry (especially rings).

As a ride or die Sonic fan, the new Sonic design terrifies me. He’s not this cutesy cartoon hedgehog like he has been in all of his other incarnations. Over the past 28 years we’ve seen Sonic go from a blue Mickey Mouse with a mohawk to this more hip and slim teen, with blue arms rather than tan. Despite all of his changes in the past I have never seen a redesign as drastic as the live-action Sonic. No longer is he a cute blue woodland creature; instead, he looks like a freaking gremlin who should not be fed chili dogs past midnight.

As much as I dislike what Paramount did to him, from a design and marketing standpoint this version of Sonic is genius. Paramount isn’t some run-of-the-mill snooty Hollywood studio. I’m not sure if you’re familiar with Titanic, Mission: Impossible, Transformers, Forrest Gump, or even Shrek but all of those films were under the Paramount name. They’re no strangers to making box office hits. In fact, they have it down to a science.

Box office success requires appealing to a mass audience, not just core fans. How do you appeal to a mass audience? You find a way to appeal to EVERYONE. One of the first tricks of marketing is try to make the product seem directly related to everyone- heck, maybe even familiar to them.

How do you do that with an animated character? Easy. We as humans are attracted to things that look like us; if it looks like us, then it’s probably friendly. This is why alien protagonists in media usually have some human characteristics. E.T. not only had human-like eyes but was curious and acted like a human child. A lot of aliens in Star Wars either wore clothing or had human-like eyes, and many also stood on 2 legs.

Sonic’s new design has a lot of human-like features.

To me that’s disgusting. Why give a noodly cartoon character human features? If I were to see those features in real life I would be very VERY afraid, it’s unnatural.

However, think about a mom whose only knowledge of video games is Nintendo and Pikachu. This tiny blue gremlin thing who’s being treated like a child (because he is), comes across as super cute. Heck, it might even take her back to the times her own kids ran around trying to be like Sonic. Despite her not knowing a lot about the specific character, the characteristics and qualities of his design in the movie can reel her in for an afternoon out with the kids. 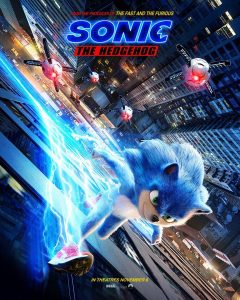 There’s a lot going on here, and it makes people want to find out more.

Character design isn’t everything. Someone with more sophisticated tastes can see past character design and focus on the story. Lore draws you into a story and makes you invested in seeing how things turn out. Some of the biggest films in history has leveraged some form of lore to earn their success. Star Wars has The Force. The Alien franchise has Xenomorphs and Weyland Yutani. The Marvel Cinematic Universe is built on literal decades of comic book lore.

The stories behind these films kept everyone talking for MONTHS. If you suddenly heard from your co-worker that the movie about, say, an underrated comic about some space outlaws with a pet raccoon and tree was a great story, then you might probably go buy yourself a ticket next time you find yourself at the theater.

That’s where Paramount seems to have made another great choice. This is some peoples’ first encounter with this world that revolves around a speedy blue hedgehog, but believe me when I say this that that same blue hedgehog that goes fast and eats chili dogs has LORE behind him.

So what kind of lore does Sonic have? His original origin story showed him crash landing on Earth and growing up here. Later he discovers that Dr. Eggman is kidnapping his woodland creature friends and destroying his home forest, thus causing him to fight back and launch the adventure that is the first Sonic the Hedgehog game. From what we’ve seen from the trailer this is the story they’re using, the original lore of Sonic the Hedgehog. There’s a lot to mine there.

It doesn’t matter if you’re an avid movie goer or you just watch whatever is on TV. One thing you will always notice is how good the cinematography was.

What makes great cinematography? There’s a lot of opinions, but the masses will usually bring up the special effects and realism in the movie. If the movie was able make you feel right in the moment with the characters, then it was good cinematography and what made that cinematography good was the effects.

Aside from the plots of Transformers, Mission: Impossible, and the recent 007 movies, the effects in those films were phenomenal! People would not shut up about how good the explosions were, how cool the car chase scene were, etc. etc. Considering that Sonic is about a fast hedgehog fighting a swarm of evil robots and trying to escape them, and considering Paramount had their hand in most of the films I mentioned, I have no doubt the movie will have great special effects and action scenes.

No one buys tickets for a movie they’ve never heard of. That’s why there are publicity tactics every single big name movie corporation uses, every single one, because by the end of the day they are trying to make money. They need the right kind of attention to drive ticket numbers, toy sales, and Blu-ray orders.

So how will Paramount make sure they get butts in seats for Sonic, not only on opening weekend but on the couch with a blu-ray version of the movie at home? They’re probably leaning on two things: choosing award-winning fan favorite actors and seeking Oscar nominations.

It’s no secret that if you win (or are even nominated for) an major award your box office appeal goes up. Movie goers are looking for signs a movie is good before they drop $15 on a ticket, so when they see Jim Carrey- a guy who’s won 2 Golden Globe awards- is in a movie they flock to it. Side note, he’s one of the best parts of the Sonic movie preview. Even people who aren’t fans of the game are starting to get excited to watch a Jim Carrey movie.

The second for sure way of getting more sales for a film is getting an Oscar nomination. Despite the controversies surrounding the award, Hollywood still places a huge amount of importance on trying to snag even a single nomination. They have several tricks to get the Academy’s attention. Aside from casting a well-known actor in the film (in this case, Jim Carrey), most film companies try to release their movies at least 2 months before nominations are discussed. That makes it not only the freshest movie in the Academy’s minds but the movie is still gaining a buzz, so they’ll most likely pick that film first for nomination.

Remember when the Sonic the Hedgehog movie comes out? November, which is 2 months before Oscar nominations go in. It is entirely possible that “Sonic the Hedgehog” could become “the Oscar-nominated Sonic the Hedgehog” if it can score a nomination for anything at all. That’s going to stick in people’s minds, which translates into higher sales both before and after Sonic’s movie theater run.

So if Sonic the Hedgehog is a hit after all, what would that mean for the fandom?

Okay, this looks terrible to fans- but it might make our fandom bigger.

As a die-hard Sonic fan, I will be going to see this movie and I’m dragging my husband (a non-Sonic fan) along with me. But then, Paramount already knew stans like me were going to watch the film. Sonic has a devoted fanbase. They didn’t need to do much to score those guaranteed viewers. All they had to do was slap Sonic on it and we’d flock to the theater, even if we grumble about the character design.

This movie won’t kill our beloved blue hedgehog. Only we as consumers can do that, which means this movie will be good for the fandom whether it’s a hit or not. Even if it only brings in 3 new fans, that’s 3 new fans pre-ordering the games and comics.

In the end, is that really is that so bad?

Previous:One Punch Man 2×04 Review: “The Metal Bat”
Next: Put Your Jon Snow Screaming Conspiracy Theory Down, Back Away From The Madness