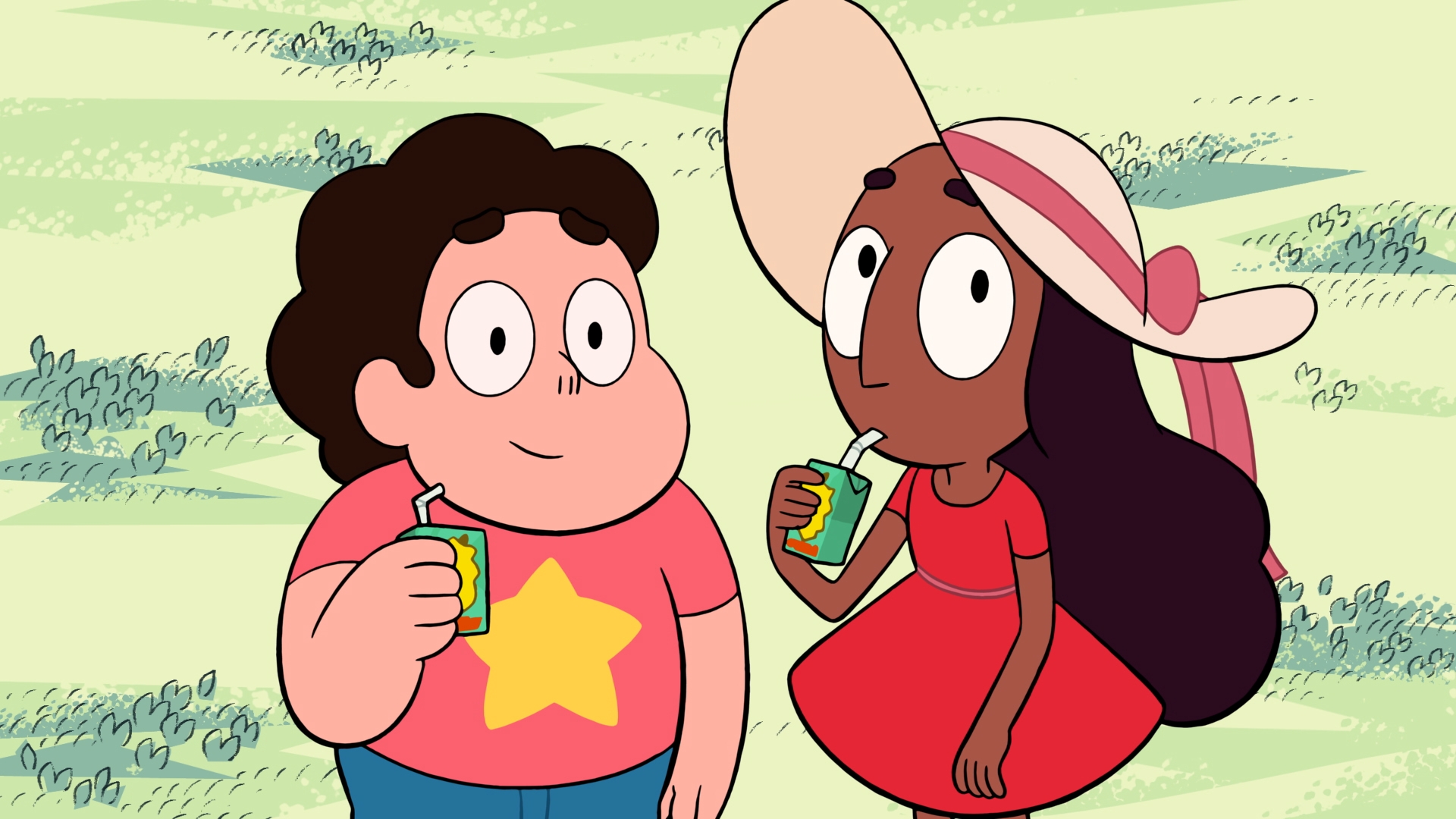 Today Steven’s Birthday continued with the actual celebrations, including Connie and Greg showing up at The Barn to celebrate with the Gems.

Unfortunately, the first thing that happens is Greg mentioning that Steven is fourteen, something that Connie – who is only “twelve and three-quarters” – is shocked about. And no wonder, because despite Garnet’s previous claim that Steven has “grown a lot this year”, Greg’s photo album shows that he hasn’t changed in a long time. 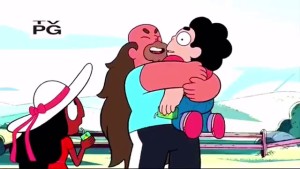 This brings up a whole new set of issues for everyone involved, but of course Connie is hearing and seeing these things for the first time – and to be honest, “Steven’s Birthday” is as much about her as it is about Steven (if not more so). She has a great but sad moment with Greg; sad because it doesn’t give her any answers, but at least she gets to be “human beings” with him, which is sweet. The problem is, Steven eavesdrops on their conversation, and when Amethyst shows him how she stretches herself, he takes it to heart, stretching himself into a [presumably] fourteen-year-old’s body.

Above all, I feel that this episode was about Steven’s identity – and nearly as important, how much Connie affects that. It’s not long before he starts feeling the stress of stretching himself, and it’s honestly stressful watching him try so hard to, well, look his age. When he and Connie danced and she laid her head on his chest and he had to run away, I was caught between that “OMG THEY’RE SO CUTE” moment and feeling awful for her and Steven because he had to run off to unstretch himself.

It seemed appropriate that it was Amethyst and Greg who saw Steven shrink back to his regular size, and I loved when Steven asked, “When Connie grows up and becomes president, what’s that gonna make me? First boy?!” Still, Amethyst warns him about stretching himself for too long…not that he listens. “Steven’s Birthday” was very much about the little-seen teenager aspects of his character, though the irony of him turning into a baby in the middle of a conversation with Connie was a bit much for me.

On top of that, baby Steven looked super cute, but I’m about to put him on the creepy-level of Kitten Fingers, Frybo, or Watermelon Steven…perhaps because he kept crying. Thankfully, Connie once again proved how awesome she is – when Greg took charge of baby Steven, Connie insisted on going with him and telling Steven that she wants to hang out with him no matter what. The fact that this was what led to Steven gaining back his usual form was predictable yet at the same time perfect.

Okay, maybe I was just glad that there was no more crying baby Steven.

But again, Connie’s reaction to waking up in her tent alone when she’d clearly gone to bed with baby Steven (his shirt was still there, after all) was what really drove the end of “Steven’s Birthday”. I love Steven and Connie’s friendship, and the fact that she was so frightened that he’d disappeared entirely was nearly heartbreaking…but instead he’d returned to his usual form, and as I said, I loved that the main reasoning for this was that he heard what Connie said to him when he was a baby.

And because Steven Universe is just all-around awesome, Steven sprouts a single facial hair at the close. So apparently he does still have some growing up to do (I have to admit that I’m happy about that), and it’s hard not to feel that everything will be okay.

Other than crying baby Steven, this was another good episode for Steven Bomb 4. It didn’t give me quite as many chills or feels (or tears) as “The Answer”, but I have to admit that now that things are somewhat back to normal, I want to know where Peridot has been!