Grab your pumpkin pup and adopted family and gather round to give thanks for “Gem Harvest.” 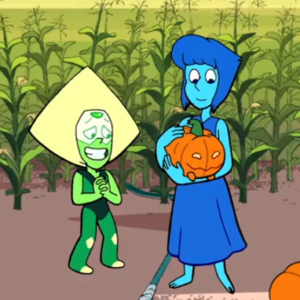 utumn has arrived, and Steven’s decided to spend some quality time with Lapis and Peridot at the barn. Their farming hijinks are interrupted by the arrival of an angry, aggressive human who claims the barn is his own. The guy turns out to be Greg’s old cousin Andy (voiced by Dave Willis of Aqua Teen Hunger Force fame), who he hasn’t seen in over twenty years. Despite his continued antagonism towards the Gems, Steven becomes determined to reach out to his newfound relative, and show just how wonderful his magical alien family is.

Thanksgiving doesn’t officially exist in the SU-verse, along with many other of our world’s main holidays, but this episode is undoubtedly a Thanksgiving Episode. From the adorable pumpkin pup, fields of overflowing corn, and the scene where everyone sits around the dinner table and literally gives thanks, it’s all there in spirit, if not in name. However, the writers also address one of the more unsavory parts of the holiday… that catching up with family doesn’t necessarily mean getting along. The way Andy clashes with the Universe family on almost every front, complaining about everything from their ‘hippie mind tricks’ to their ‘vegetarianism’ certainly reminds me of some of my own family interactions. Unfortunately, for some, it might hit a little too close to home. In the wake of the recent American election, the ranting of a sexist, jingoistic, anti-immigrant xenophobe suddenly becomes a lot harder to laugh at.

If these are typical attitudes held by the rest of the DeMayo family, it’s not hard to see why Greg felt tempted to drive off in his van to pursue his dreams. However, despite everything, Andy is still a sympathetic figure. Caught up in the past and obsessed with How Things Used To Be, he allowed everyone in his life to slowly drift away, becoming isolated in his own bitterness. While jubilant to discover his nephew, and continuously friendly towards Steven, it’s his own stubbornness which prevents him from opening up to everything that comes with him. Eventually, he realizes this himself– and comes to the conclusion that it would be better for everyone if he just left.

Steven, of course, rejects this philosophy. Part of this is from his ever-loving nature, and how he doesn’t want to see Andy end up alone… but he also outright states that he doesn’t want to be alone either. It has been made very clear that while Steven’s on good terms with most of Beach City, the only truly close humans in his life are Greg and Connie. For a kid that’s half-human, it’s been causing him to feel pretty isolated. Finally, though, Steven’s been given a chance to connect with the other part of his heritage. Maybe it’s not perfect, but Steven’s long since learned that the past rarely is. 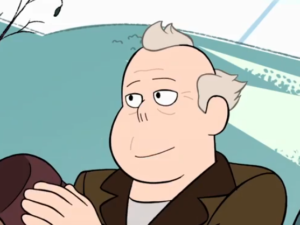 Speaking of connections, of course Steven Universe had to insert something sneaky into this episode: Andy’s hair. Does it look suspiciously Marty-esque to anyone else? Is that how he and Greg got involved? Does this mean Steven and Sour Cream are related? Whatever the reason, the reveal seemed a bit too deliberate to mean nothing.

For all the touchy-feelyness of “Gem Harvest,” the best part of this episode is definitely the comedy, which derives from the natural play of character personalities bouncing off one another, and the inherent hilarity of any time Gems are forced to interact with human culture. Peridot’s cheerful cry of “I’m on a tractor!”,  her and Lapis’s assumption that vegetables are sentient, Pearl casually suggesting the Gems all marry each other… it’s all delightful. 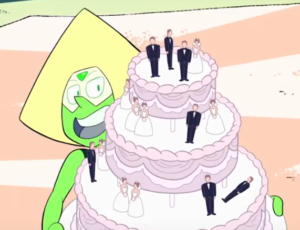 Yet the situation isn’t just played for humor, but also to casually show just how much our cast has grown, especially in regards to each other. Garnet being openly supportive and joking. Pearl and Amethyst both coming out in defense for Greg. Lapis, still hurting from her past experiences, but finding happiness despite them. Peridot showing genuine thoughtfulness and sincerity. Greg fitting in comfortably among this ragtag group of aliens. And at the center of it all, Steven, relishing the chance for everyone to be together.

This wasn’t a bombshell of an episode, but it was warm and cozy, like an autumn sweater. Sometimes that’s just the thing you need.

Previous:Image Comics Is Having a 25¢ Comic Sale For Their Anniversary
Next: Love Wins on “Yuri on Ice”, It’s a Victuuri!