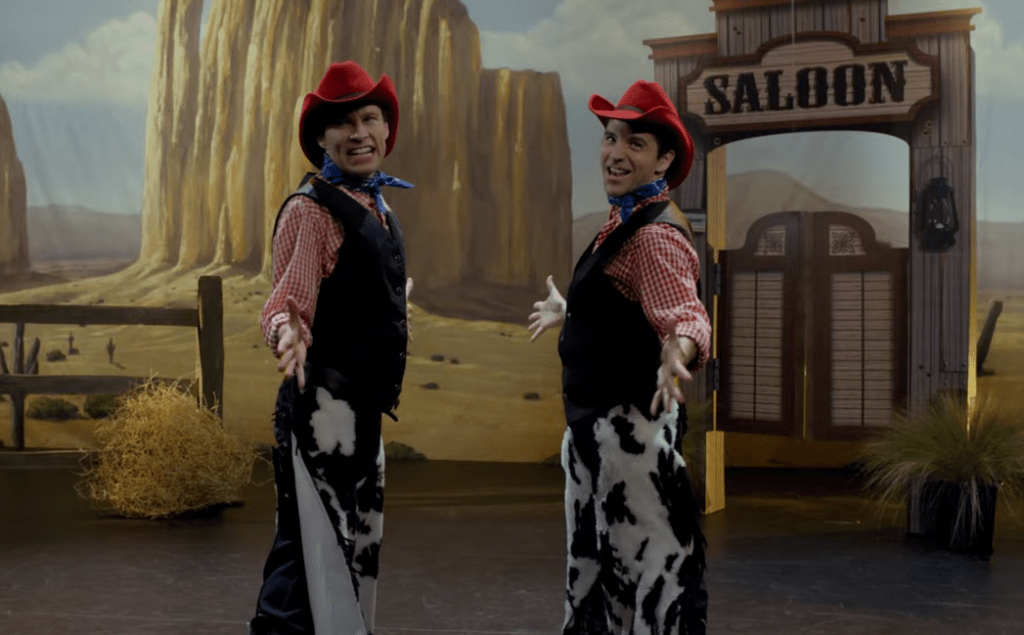 Anthony and Bradley – ‘Still Waiting in the Wings’ (Image: Screengrab)

Still Waiting in the Wings is a high-energy queer musical comedy that’s sure to offer some of you a short break from what going on in the world.

I was provided with a free review screener of Still Waiting in the Wings. The opinions I have shared are my own.

The release schedules of films are all messed up due to the current pandemic. So, finding something good to watch on a streaming service is a treat. After enjoying the musical comedy DIVOS, and being in the mood for more musicals, I said yes to receiving a screener of Still Waiting in the Wings. While this film is a sequel to Waiting in the Wings, the latest installment didn’t punish me for not knowing what happened in the predecessor.

Still Waiting In The Wings follows the trials and triumphs of actors waiting tables in Times Square. While dreaming of the Broadway stage, the reality of slinging hash under florescent lights mixes sweet aspirations with bitter drama. There’s no people like show people and there’s no telling what can happen when they’re pitted against each other. Nick Adams, Ed Asner, Carole Cook, Lee Meriwether, Patricia Richardson, Chita Rivera, Seth Rudetsky, Sally Struthers, Bruce Vilanch, and Cindy Williams round out this heartwarming homage to Broadway with some delightful cameos.

The film is about Anthony (actor/writer Jeffrey A. Johns), who’s still waiting to get a big break and getting to realize his dreams on Broadway. Until then he’s working at Cafe Broadway with his friend Rita (Rena Strober). Cafe Broadway allows them the chance to showcase their skills in front of customers sitting down for a meal, but of course, it’s not the real thing. The two do seem to have a happy life with loving boyfriends, though.

However, things change for Anthony and Rita when Rita’s boyfriend, Tony (Adam Huss), gets a role in a daytime soap and a new employee, Bradley (Joe Abraham), comes to Cafe Broadway. Rita’s jealous of Tony’s career and thinks he’s moving away from her. As for Anthony and Bradley, the two find themselves fighting over similar roles (especially because opportunities are scarce due to both being short in stature). Broadway can be very competitive and that’s made quite clear through the interactions between Anthony and Bradley. Bradley also causes tension between Anthony and his boyfriend, Lee (Blake Peyrot).

While I liked Anthony as the lead character, I can understand if he comes across as a bit annoying to some because of being too happy all the time. He’s an upbeat person and you, just like the rest of the characters, will have to deal with it. I did appreciate how the writers gave him some dimension. There are scenes where Anthony does feel sad and he even makes certain mistakes. Being optimistic doesn’t mean a person’s incapable of other feelings (including jealousy and anger).

My only gripe with the narrative involves Bradley’s intentions. I would have liked a backstory to help explain why Bradley’s so conniving and bent on destroying Anthony. I understand being competitive, but Bradley took it too far.

The good news is that Still Waiting in the Wings is a queer musical comedy with a happy ending. Yes, there’s lots of relationship drama. But by the end of the film, everyone takes accountability for their actions and learn some important lessons.

The songs are fun to listen to. I didn’t skip a single one of them because of the lyrics, choreography, and shenanigans going on. In my opinion, everyone in the cast did a wonderful job in their respective roles. There’s so much chemistry on the screen. I’m sure filming was a blast. Broadway fans are going to enjoy all of the cameos.

Directed by Q. Allan Brocka and written by Arie Gonzalez, and Jeffrey A. Johns, you should consider checking out Still Waiting in the Wings. Released in May of this year, it’s available on DVD and a number of streaming services including Amazon, Google, and iTunes. It won a handful of awards during the festival circuit. So, you know you will be supporting something that’s well-made.

Have you watched it already?