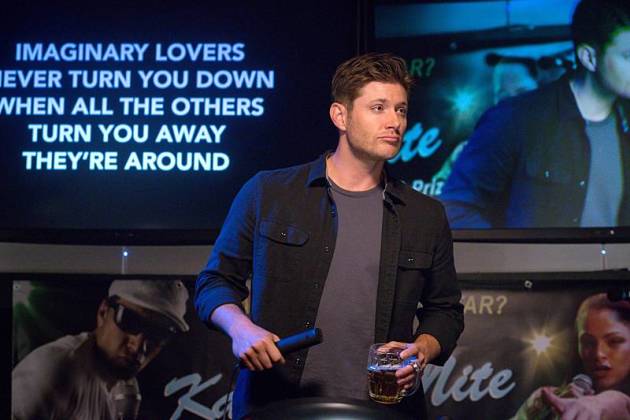 The season 10 premiere episode had a lot of character interaction that I enjoyed, though a couple of lines did rub me the wrong way. Despite the occasional twitch worthy dialogue I was happy to see some of my favorite character duos developing their relationship further. Sam and Cas have been woefully underdeveloped as friends and I’m thrilled they’ve begun to show more of their relationship. Dean and Crowley, while not the ideal healthy relationship, are still an amusing pair that I enjoy seeing interact. We also saw the return of Hannah, who I thought had potential when she was first introduced last season. Hopefully that potential will get used right this season and we’ll have a dynamic female character as part of the regularly occurring cast. Also, that title card? Possibly the best title card from all ten seasons of the show. I will definitely be looking forward to that even if it’s an episode I’m not too particularly sold on.  It’s absolutely stunning.

My favorite moment of the episode by far was the phone call between Sam and Cas. My theory for why their friendship hasn’t been as well developed before is because Misha and Jared have a habit of pranking each other on set, but for this particular moment the two jokesters didn’t have to be in the same room. Cas is genuinely concerned about Sam’s well being and the tone in his voice conveyed that quite clearly. Likewise Sam could sense that Cas was ill and opted to leave him out of his current investigation for his own well being. When the truth comes out that Sam is on Deans trail without telling Cas, I’m sure Cas will be quite miffed, but Sam’s heart is in the right place. I don’t think he excluded Cas because he didn’t want the help, but rather out of concern for Cas. I’m looking forward to how this develops and I hope Cas is understanding of Sam’s decision. We’ve come a long way with them and I don’t want it to slide backwards. They are united in their concern for Dean and have the building blocks of a beautiful friendship in its own right.

Crowley and Dean are another character duo that I absolutely adore, though I must admit their interactions in this episode weren’t as fun as what they had last season. They’ve always been sarcastic and antagonistic toward each other, but it seemed far less playful now. Dean’s new demonic nature is probably a huge factor for that. Crowley clearly sees Dean as a protege now and is extremely insistent that Dean rules hell with him. Dean is resisting and trying to just enjoy his new existence. This shifts the power dynamic between them a bit and almost makes Crowley appear weak. I kind of feel bad for the guy. I feel as bad as one could possibly feel for the King of Hell at least. He’s still evil and all, but it’s like he’s slowly realizing he’s fighting a losing battle.

The cringe worthy dialogue between Crowley and Dean, though, I could have done without.  The “b***h/jerk” line is sacrosanct. I’m not even a “brothers only” loyalist but even I know that’s their thing. When that line happened I physically twitched. While Dean may be resistant to Crowley’s plans for Hell, this seems like a sign that he’s benefitting from him in some way. If making the audience uncomfortable was the goal, it certainly succeeded.  It’s almost like he’s trying to fill the big Sam gap with Crowley, but it’s clearly not working. This loneliness and desperation on Dean’s part may also be a contributing factor in their changed dynamic. I miss their old dynamic a lot. Dean’s always been a mess, but this is a whole other level of mess that’s screwed up his relationships with everyone in his life.  He can’t even banter with the sassy King of Hell anymore.  It’s tragic. 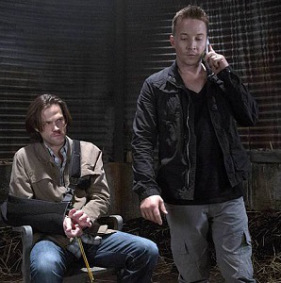 As far as demon Dean goes, he’s not as dramatically different as I thought he’d be. He is a little more loose with the fighting, a bit more blunt, and gets a weird enjoyment out of singing bad karaoke music, but he still drinks too much, enjoys one night stands, and hangs out in seedy bars. The only major difference was his seeming lack of regard for Sammy at the end of the episode by refusing the meet with his captor. He did promise he’d kill the captor, though, and he did leave Sam a note at the beginning of the episode instead of leaving him hanging, though it was a tad short. I think it’s obvious he still cares about Sam, even if he’s a demon. It just manifests a little differently. Instead of promising to charge in and retrieve his brother, he would rather steer clear of Sam and seek revenge for anything that happens to him. Even that can be seen as a sign of concern, though. He doesn’t want to subject Sam to what he is now. It’s a really complicated moment that I’ll need to ponder again as we see more demon Dean.

Overall I feel like there was a lot more potential for Dean’s demon side. I don’t exactly hate it and Jensen’s acting is superb, but what is supposed to come off as risky or immoral wasn’t really much worse than what Dean already did. Perhaps that’s the point though? Perhaps he’s supposed to be the same old Dean, but just a tad amplified?  I was just expecting the change to be a bit more dramatic.

Castiel’s story is once again diverging from the main plot, though I hope it doesn’t remain apart as long as it did last season. I’m really bored by the constant struggle with the other angels over the benefits of humanity. I feel like that moral argument has been beaten into the ground for several seasons now. I wish they’d either have Castiel be a free agent type of angel like he was in seasons 5, or just bite the bullet and have him fall for good. I personally prefer my Castiel as an angel, but if we’re going to recycle the same angelic morality questions every single time, I’ll gladly take human Castiel. Either way would have him stepping away from the repetitive angel plot and put him back in the main story.

That said, I am enjoying the Hannah character and I hope she develops more and doesn’t fall victim to the fate most of the women on this show eventually succumb to. Her morality and devotion to heaven seems to be in flux. She wants to remain loyal, but she also respects and admires Castiel. She’s conflicted and that could be an interesting personal story for her. It was certainly an interesting story for Castiel and when he eventually decided to side with humanity he cemented himself as a fan favorite going forward.  When this story pulls in all the other angels, though, it feels like territory we’ve been over a million times already. Some Angels want free will. Some want to remain loyal to heaven. Yadda yadda. Enough. 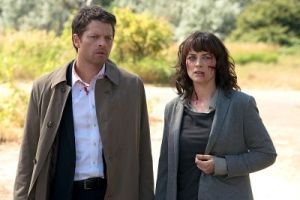 There were other little things about this episode that irked me. Why did the episode have to start with a woman being tortured? Yeah, everyone on this show gets tortured, I know. But I thought fandom had been pretty insistent that we’re tired of pointless violent imagery against women. It didn’t do much to prove that Sam would “do anything” for Dean as this wasn’t exactly a new development as far as Winchester strategies goes. If it was meant to be new or dramatic, it failed. Also on the topic of torture, how many times has Sam been tied to a chair at this point? Or kidnapped, period? The frequency that this happens has lessened the impact of these moments. “Dean, Sam, and/or Cas getting tied to a chair and/or strung up” would make an excellent rule for a Supernatural drinking game.

I’m not sure how I feel heading into the rest of the season. I was initially super excited about demon Dean, but it hasn’t been as dramatic of a shift as I was hoping for. It could still be interesting, though, if they steer his story right. Season 8 was incredible, but season 9 was wall to wall disappointment. The first episode of this season was a mixed bag of good and bad. So how will the rest of it go? I guess we’ll just have to wait and see.