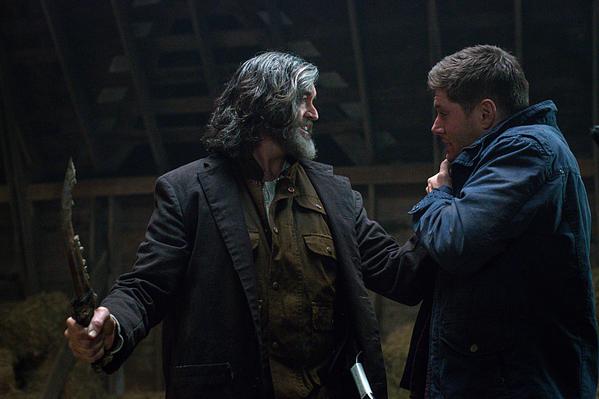 While last week’s episode was aimed toward those who wanted a narrative return to the classic hunter episodes of the first three seasons, this week seemed to be a gift for those who enjoy the dynamic of Team Free Will and overarching plot.  Cain returns, causing all four of the main characters of the show to once more work together in order to stop an enormously powerful common enemy.  There were meaningful and emotional moments among pretty much all four of them, giving fans of all the different character dynamics something to get excited about.  If you like Team Free Will and the ongoing storyline involving Cain and the mark, there’s a great deal to be excited about.

I love the characterization this week for everyone.  Sam rattling off true crime facts reminds me a lot of myself.  While I usually deeply identify with Dean on a lot of levels, Sam getting nerdy about weird things makes me feel like I’m looking in a damn mirror.  Sam and Dean were on point, though, and I was happy to see the characters I know and love on my screen after the rather out of character previous episode.  Dean even showed his vulnerable side when he admitted that he was scared of what he was headed into, which once again gave Jensen Ackles a chance to make fangirls cry with the the most subtle facial expression.

It was also a relief to see Castiel again.  It’s just unfortunate that the first shot of him included torture, which is a common activity on this show that I’ll never quite be fully comfortable with.  Yep, it even bothers me if it’s a demon being tortured.  It’s a pretty hard line for me.  That said, pretty much everything else Castiel-related was spot on.  His concern for Dean, his growing friendship with Sam, and the trust that the brothers place in him were all well crafted.  I think my favorite part of him this season is the continuing bond with Sam as they both worry about Dean’s well being.  They had several moments this week where that friendship had a chance to shine. 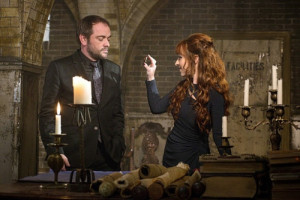 Team Free Will was back together in full force, which almost guarantees that I’m going to enjoy an episode.  We even got on again and off again Team Free Will member, Crowley, who is one of those villains I just can’t completely root against.  As one of our editor’s Tara put it, he’s “sometimes bad and sometimes not.”  This was one of those “sometimes not” moments.  Sure, he’s the King of Hell and absolutely a bad guy, but he also has an intense drive for self preservation and that often puts him on the same side as Team Free Will.  As evil as Crowley truly is, I just can’t hate him.  Maybe it’s his wit.  Maybe it’s because I love Mark Sheppard from other projects.  Maybe it’s that very attractive voice.  I don’t know, but I love when he gets a bigger role in things.  When we get him playing nice with TFW, I revel in it because I have no idea when we’ll get it again.

We also had Rowena play a pretty prominent role.  Most of what she did was removed from the main Cain arc and mostly involved her plotting and scheming on her own, but we saw quite a bit of her.  I’m still on the fence about Rowena.  I find the actress incredibly charming, but so far her character hasn’t quite popped for me.  She just plots and schemes and plots and schemes.  But maybe her leaving Crowley signaled forward momentum for her own plot, and I’ll be able to form a more thorough opinion of her when the show returns after the hiatus.

As far as the effect on the overall plot of the season goes, the impact was huge.  The death of Cain is pretty major.  It’s pretty obvious that the effect on Dean is going to be an ongoing issue for the rest of the season and it’s possible we may even see the return of demon Dean.  At least I hope we see him return as a demon, because I feel that didn’t last nearly long enough. I also hope that this means Cas and Sam will have more moments together, because their friendship has grown enormously this season.  Their shared concern for Dean unites them in a profoundly strong way.  Dean means a great deal to both of them, but I don’t feel like the two of them really had a chance to connect with each other until this season.  It’s been quite a gift for fans of that friendship.

We have almost a month to go before Supernatural returns.  Keep your eye out for a special Supernatural roundtable discussion featuring several members of the staff and fans just like you.  We’ve got a long wait ahead of us and there’s a lot to talk about.