Supernatural 11×15 Review: Beyond the Mat 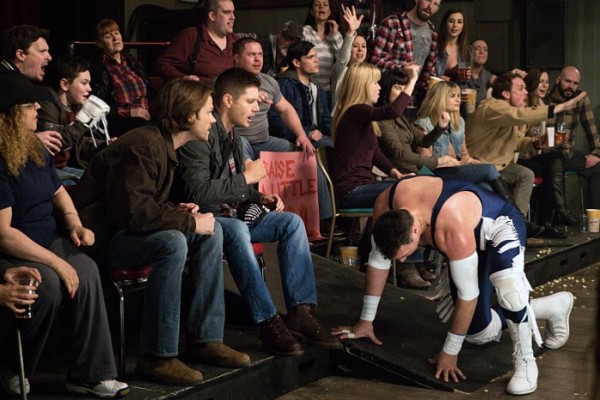 Over the seasons, Supernatural has developed a trend of following a heavy arc episode with what they consider a lighthearted filler episode.

“Beyond the Mat” was a fluffy filler piece intended to lighten the mood and brighten spirits after the dark ending of the last episode. Sadly, it left me with as many questions as laughs.

The losses of the last episode have left the guys a bit behind the eight ball, and it’s clear from the start of the episode that they really needed a break. It’s always good to see the guys having a good time, and the concept of a case involving professional wrestling seems tailor-made for that. Granted, I’m not a pro wresting fan (always thought it was a bit cheesy, myself), but I must admit that it does seem like the perfect opportunity for a hunter to blow off a little steam and forget their troubles for a while. Sad that it didn’t last long before the world came knocking.

It wasn’t long into the episode that the questions started for me, either. The episode took some small liberties with canon, making me wonder if it was an attempt to smooth over some of the damage done to John’s reputation over the years. For example, if John took the boys to wrestling matches as kids, why was Dean irritated at the ball games John took Adam to in season 4? If Crowley was a workhouse orphan as a child, how did he get an oil painting of himself as a child, something reserved for the wealthy?

Other questions were more closely related to practicality and curiosity. Did Sam really manage to have a poster above his bed when they moved rooms every week? If Dean racked up a breaking and entering charge at 10, how old was he when he started committing crime? What was the first one, and why? Does everyone on this show have a storage unit hiding somewhere? When Dean tried to give the wrestler the gun, was he offering a way to fight back, or a slightly less painful method of death? What did they have to do to convince Mark Sheppard to actually lick the floor?

It was nice to see some good continuity moments. Sam definitely still sees their childhood somewhat less rosily then Dean does. Dean is still a (not so secret) fanboy, and I hope the t-shirt he got in the episode pops up in later episodes.

Lucifer seems to have gotten a handle on things. He’s finally got the demons and hell running like a well-oiled machine, and they seem to like it. If Crowley ever gets back in charge, I can confidently say there’s likely to be a massive housecleaning of demons in the top ranks. Although, if he keeps flinching at the sight of demons like he does in this episode, I wouldn’t be surprised if he washes his hands of the whole lot and runs off. Maybe he can open a clothing boutique. He was a tailor, after all.

Misha’s impression of Lucifer just gets better with every episode. The whole last scene was a perfect clone of Pellegrino, all threat and sex appeal. Misha also looks to be having a blast at the role.

Last week, Lucifer commented that he hadn’t thought that any of the Hands of God survived the flood, a remark that seemed odd to me. This week, we got clarity when Crowley stated that one of the big objects of Exodus, the rod of Aaron, was created on the 6th day of creation. If the rest of the objects were created at the same time, were they stored in heaven’s armory with little divine post-it notes on them, reading things like “note: give only to Aaron, brother of Moses, 1446 BC”? If God saw everything that would happen, why not put stumbling blocks in the way for the things he didn’t want happen? Or is that what the tablets were for?

Speaking of other Hands of God, what about two other “divinely touched objects” we’ve already seen? What did Cas do with the pieces of the Staff of Moses? Is it with the other weapons of Heaven he got from Balthazar? And where did he put those? If those are out of reach, then there’s always the Spear of Destiny. Dean set it to one side in the bunker the last time we saw it, so it should be in there somewhere.

One thought that occurred to me: If God saw everything coming, is that why he made Cas different? Cas doesn’t fit in with the other angels, and they think him broken and wrong. Looking back, though, he seems instrumental to the failure of the attempt at the Apocalypse. Naomi implied he tried to prevent mass human casualty in the time of the Plagues of Egypt, too. Did God make him just for that reason, as Heaven’s “pull in case of emergency” switch? Or was he made to work with Dean and stop the Apocalypse, with the previous acting out just being an odd side effect? Was Cas made just for the Winchester Brothers? 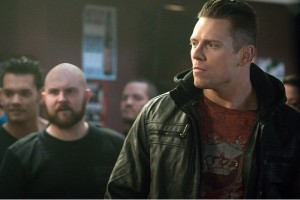 I loved the allusions to the outside world. The use of a real-life wrestler for one of the key wrestlers was an excellent choice, and The Miz did a great job going from being the bad boy you can’t stand to the sympathetic victim. Dean’s fanboy moment at the funeral was clearly inspired by fan reactions at the cons. Lucifer’s motivational speaker moment reminded me a bit of some of the GISHWHES bits that have come out.

The comments throughout the episode about the wrestlers, the wrestling show, Crowley’s fan from influence, and even the remarks about the guys from the demon at the end seemed to be a commentary about showbiz and the nature of fan worship. Although I have to disagree with the demon, the guys all more then live up to their hype. If Dean is a example of a Kansas 5, who exactly is a LA 10?

In the end, the characters ended up in the places we did need them to get, regardless of the issues with the episode. Dean and Sam are focused on beating Lucifer and the Darkness, while still saving Cas. Crowley is now suitably attired and free, which hopefully will help rather then hurt our heroes in the end. And Lucifer is now 0 for 2 on Hands of God and down one on the hostage scale.

One thing did really confuse me, though. During the demon’s speech at the end of the episode, the demon said “It’s every demon for his/her/shemself.” It sounded odd, so I went and googled it, and could only find an old reference to it being an acceptable androgynous pronoun. I then dismissed it and finished watching the episode. Afterward, though, I saw a few members of Twitter commenting on it being a gendered slur.

If it is, then that’s a terrible thing for Supernatural to do. The controversy did, however, leave me with questions. How are people who aren’t themselves dedicated to that topic to know? How are people supposed to keep an eye on the changes in the way people refer to themselves and others? If it’s not something easily discovered, could the use of the term have been meant as an attempt at inclusion rather then insult? And should we really be furious at someone who tried to be friendly and inclusive, even if it went horribly wrong, as long as it was obviously an accident? If they apologize and point out that they didn’t know, does that make it better?

Overall, the episode did make for fairly entertaining and less dense filler. There were issues and questions though. Most were unimportant, but some are rather serious. Hopefully, future episodes can either answer the questions satisfactory or avoid similar issues altogether.