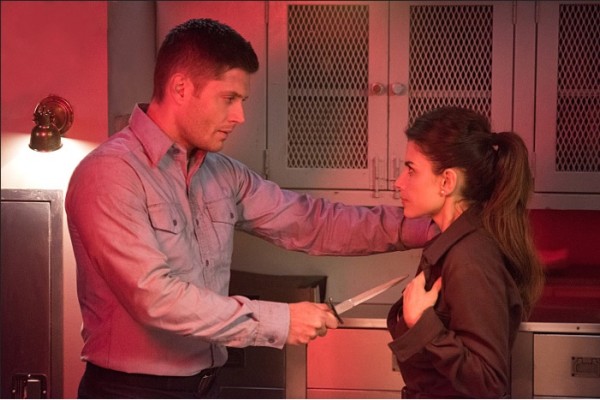 The one constant that ties together the various seasons of Supernatural is the act of sacrifice. Be it for family, for friends, or for a stranger, the heroic thing to do is sacrifice yourself to save the day. It’s the Winchester thing to do.

Sadly, it rarely works, and always has unexpected side effects. You’d think they’d all learn that by now.

This was quite an ambitious and entertaining episode. The short joint to the past, penned by Robert Berens and directed by John Badham, took us back to the time of World War 2 to interact with a bunch of very paranoid sailors and their passenger, a much too trusting French member of the war-time Men of Letters.

The theme of the episode seemed to be that self-sacrifice is effectively futile. Dean volunteers to go back in time, only to be stuck there. Sam volunteers to become a potentially explosive human battery to power up Cas and retrieve his brother. He discovers, to his horror, that not only is the power not needed, but that his own living nightmare is walking around wearing his friend’s face. Cas has volunteered to host Lucifer to save his friends, only for Lucifer to take him for a joyride and try repeatedly to kill his friends. Even the victims of the week got into the act, with Delphine sacrificing herself to the Hand of God to save the sailors and send Dean and the Hand home, only to end up with a sunk sub and a dud weapon.

While the change in procedure from the standard “Forget the world, let’s save us” attitude they’ve had till recently is greatly appreciated, it’s still not a workable long-term strategy. It’s great that they’ve learned from their mistakes, and it’s definitely in keeping with the theme of the season, but they need to find a route that avoids the death and destruction of both them and everyone else. Lucifer admitted in the episode that caging Amara the first time was indeed a team effort, and I’m sure that a similar strategy is the best option here. Separate they fall, together they stand. Let’s get on that, shall we? Rescue Crowley, then get him to help rescue Cas, then you can beat the bad guys together. Separately doesn’t seem to be working too well.

I was as surprised as Dean to find that Delphine was officially a member of the group, as their tendency to restrict membership to the male gender has been noted by Dorothy in “Slumber Party”. The episode mention of the inclusion of women in the workforce during the war and the name-drop of Rosie the Riveter was much appreciated. I just hope that the Men of Letters retained that policy after the war instead of restricting it again, as happened with the rest of society. It’s a long time between 1945 and 1958, and I’d love for us to have more historical Women of Letters then just Delphine Seydoux and Josie Sands.

The presence of a Nazi from the Thule Society was a treat. It’s always nice getting good references to interesting past episodes. The Thule were an effective bad guy, and are the type of bad guy you can really enjoy seeing lose. (As a side note, I wonder what Aaron and his Golem are doing now. We need them back one of these days.) 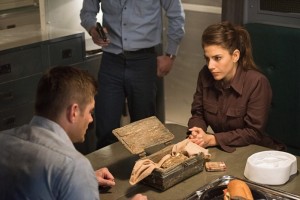 The “Hand of God” weapon being a piece of the Arc of the Covenant was an interesting idea. If it’s in pieces, then the rest of it might be out there somewhere. Add to that the other various bits of biblical souvenirs that God might have touched, and they now at least have something to keep an eye out for. Lucifer did suggest that they might have been wiped out in the flood, though, which makes no sense in the established biblical time-line. Either he’s got a skewed sense of history, or Cas was understating it when he said the Bible got more wrong than right.

Another interesting moment: Lucifer can time travel, but Cas cannot. Why? Is it related to the level of grace they respectively have? Or is it wing-related? After all, Lucifer got from the water in the middle of the Atlantic to the bunker in landlocked Kansas while still completely waterlogged. Is the transition in space as well as time a function of time travel, or does Lucifer still have his wings? If not, when did he lose them? With the rest of the angels, or when he fell at the dawn of mankind? With him outside the cage and in the upcoming episodes, hopefully we get some questions answered. 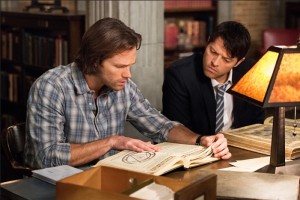 Although all the main actors did masterful acting jobs during the episode (especially when confronted by Lucifer, the possible loss of Cas, and the historical results of what happened on the sub), I must especially commend Misha on his fantastic acting in this episode, particularly during the climax of the episode. The fight between Castiel and Lucifer for control was enthralling but subtle, conveyed through body language, tone of voice, and facial expression. He managed to make the distinction between the two very clear and quite believable. He also looked like he had a blast filming the scenes.

I’m glad Cas is still in there, and is able to fight back if he truly needs to. Hopefully, this will help the guys get him back in the long run. I’m also glad that Dean continues with his insistence that they’ll get Cas back, just like he did in season 7. Here’s hoping that season 12 follows the example of season 8. We could always use another golden season.

Hopefully, the guys can pull out of this effective kick-in-the-teeth and find a way to accomplish their goals. Preferably without sacrificing anything else. But however they manage it, it’ll certainly be entertaining.

Previous:Rey, Phasma, and other heroes in tin: Schylling Toys and Star Wars at Toy Fair