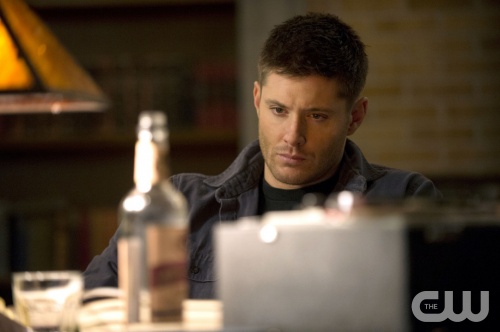 There was a lot of hype leading up to this episode, partly for the content, but also largely due to the fact that this was the first episode directed by fan favorite actor Misha Collins.  While Misha does have directing experience under his belt, this was the first time he stepped behind the camera on Supernatural.  For his Supernatural directorial debut he was given an important mytharc episode that brought back many popular ongoing elements. The episode marked the return of the incredibly wonderful Alaina Huffman and the Men of Letters mythos that has been the backbone of a large part of the mytharc episodes this season.  We also got to revisit the Mark of Cain and the dramatic effect that it’s having on Dean as well as the complicating relationship with Crowley that he’s developing as a result.  As the season begins to approach its conclusion, we’re starting to focus more on the ongoing story and step away from the one shot monster-of-the-week episodes. 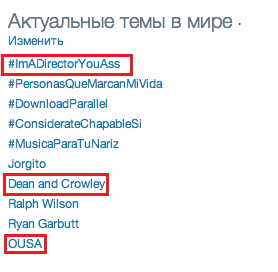 Outside of the narrative of the episode, it was a huge night in the Supernatural fandom.  In honor of Misha’s Supernatural directing debut, the party on Twitter started many hours before it was set to air.  Fans got organized in order to make the episode the highest rated of the season and were fully prepared to utilize the Nielsen systems new Twitter methods to help with that goal.  Only tweets from those within the US count towards ratings, so Supernatural fans in other countries included the letters “OUSA” in their tweets so that Americans could retweet them and make it count.  As a result, #ImADirectorYouAss (the hashtag in honor of Misha being the director) and #Supernatural trended globally, and OUSA trended in many places completely by accident.  The hashtag #Misha4SPN10, while it didn’t trend, did get more than 17,000 tweets, which sent a powerful message that many fans are hoping for Misha’s return next season.  In the USA #ImADirectorYouAss and #Supernatural both trended.  In fact, #Supernatural had more than double the number of tweets than any other episode this season.  Misha Collins fans really stepped up to the plate and showed their appreciation and enthusiasm today.

Stats via @xceteras and Topsy

When we look at the narrative of the episode, it’s interesting to note just how many of the ongoing plot elements from the season were expanded on this week.  Dean is continuing to struggle with the changes that the Mark of Cain has inflicted on him.  We’re seeing glimpses of a dark version of Dean, which I’m personally very conflicted about.  I do enjoy dark interpretations of his character, whether it’s simply the frighteningly badass hunter version or a monster version, like his brief stint as a vampire.  Jensen’s acting in these moments can be both intimidating and, let’s be honest, very attractive.  Misha’s directing choice to let Jensen carry those dark moments with isolated close ups was a good one.  Jensen’s incredibly talented and I’m enjoying watching him take Dean to such places.  The only part that worries me is the possibility that he may be losing control of himself and may be at the whims of another figure.  I enjoy darker versions of Dean as long as he retains who he is at his core.  I don’t want to see him become a puppet.

Dean and Crowley’s unusual relationship got even more screen time in this episode.  Crowley put it nicely by referring to himself as Dean’s “mistress.”  I’m not even sure if Dean understands fully why he’s deferring to Crowley, but he keeps going back to him again and again.  If anyone is controlling Dean right now, it seems to be strongly hinted at that it’s Crowley.  I’m a big fan of Mark Sheppard, so I’m enjoying having him on my screen, but Crowley is definitely an antagonist and I’m pretty sure I’m not supposed to be rooting for him, even though I love both the actor and the character.  I do have a habit of liking villains, though (Loki and Hannibal, for example) so I guess this will just have to continue to be a plot point that I’m highly conflicted on.  More Crowley? Awesome.  Dean Winchester tangoing with the King of Hell? Not so awesome. 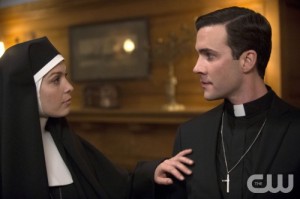 Meanwhile Sam investigated a report of previously good people turning into violent killers in Illinois.  This brought him back to the Men of Letters and Abaddon plots that have been largely absent from the ongoing narrative for many episodes, save for the presence of the bunker.  It’s absolutely wonderful to have Alaina Huffman back.  This time we got to see her play Josie Sands, the woman whose body Abaddon possessed way back in the 1950’s.   Josie and Henry had a close partnership before her possession, though her romantic feelings towards him are implied to have been largely one sided.  Josie seemed to have loved Henry romantically while Henry loved her “like a sister.”

She was a unique individual among the Men of Letters, her gender earning a laugh from the demons who had the duo cornered in the convent.  The 50’s weren’t exactly progressive, so a woman stepping up and playing with the boys was definitely against the norm.  Josie was an incredibly strong, brave, and selfless woman, convincing Abaddon to take possession of her instead of Henry, so she’s definitely earned a spot on my “favorite women of Supernatural” list.  The world needs more people like Josie Sands.  Considering that Abaddon has been previously dismembered, though, we can assume that she’d die relatively quickly even if Abaddon gets ejected from her body without the use of a demon killing blade.  It’s unfortunate, because we all know this show needs more recurring strong female characters, but the chances of Josie returning are very slim.

We’re now headed into a mini hiatus before we get the back end of the season.  The rest of the season includes the backdoor pilot to Bloodlines (previously called Tribes), which is the Supernatural spin off that will be set in Chicago.  With so few episodes left in the season I’m hoping that they focus mostly on the mytharc episodes as opposed to the monster-of-the-week episodes, but there’s a lot of unknowns ahead of us, so I’m not sure how it’ll play out.  Either way, I was greatly pleased to revisit so much of the story and I’m glad that Misha was given such a meaningful episode as his Supernatural directorial debut.