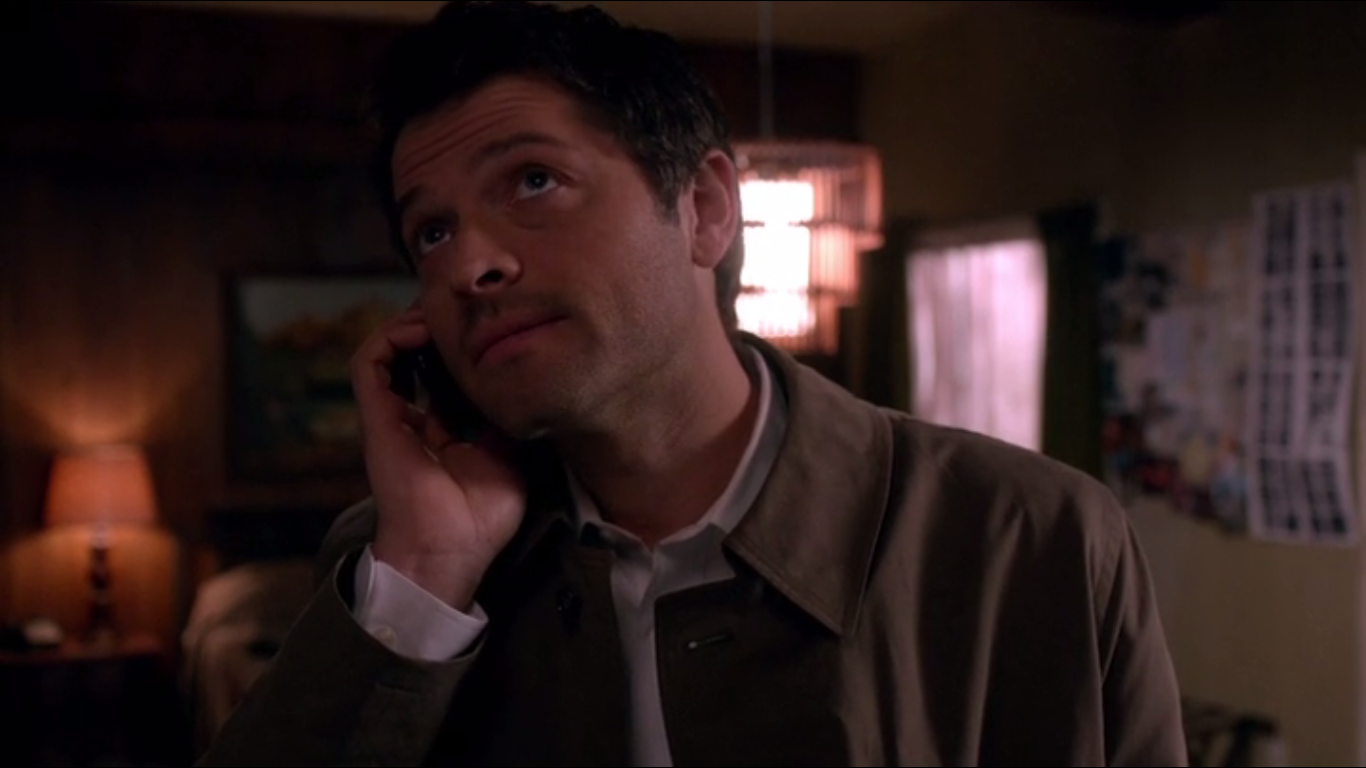 Meta Fiction was jam packed with moments that fans have been looking forward to for weeks.  We started right out of the gate with Dean’s highly anticipated shower scene that had fandom worked up since the promo first aired. This was followed a few moments later by Castiel gracing our screen for the first time in weeks, which came as a welcome relief to many fans who’d been missing the angel.   Both of these events inspired tags on Twitter before the episode even aired.  The tag #WetDean was created to celebrate the heavily marketed bit of shower moistened skin and #HelloCas was started to welcome back the fan favorite Castiel.  The latter trended in the United States at several points and received over 12,000 tweets in a 24 hour period.  There were other explosive surprises in store, though, including the sudden reappearance of another fan favorite who had been long rumored to be making a comeback.  Overall this episode proved that fans are being listened to, to some degree, and given what they want to the extent that the narrative will allow.  It shouldn’t be a surprise, though, as this episode was written by Robbie Thompson who has proven time and time again to have his finger on the pulse of a large portion of the fandom. 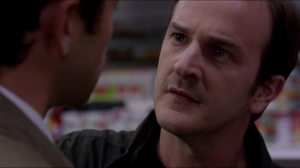 The beginning of the episode was heavily Castiel and angel-story focused.  There was a collective gasp in the fandom when Richard Speight Jr appeared to have returned as fan favorite archangel Gabriel.  There have been rumors for so long that he’d be coming back that many people had begun to dismiss them as wishful thinking.  In the past few weeks leaks hinted that he was spotted on set, which was definitely the strongest hint that we’d had in a couple of seasons, but was still largely dismissed as him possibly just visiting friends in Vancouver.  Even cast and crew tweeted to deny it, though their wording was very precise – Richard wasn’t returning in the role that we were familiar with.  Indeed, it turns out to not actually be Gabriel,  but just a ruse by Metatron to ‘teach’ Castiel a lesson.  It’s disappointing not to actually have Gabriel back, but it was still a delight to have Richard Speight Jr return so overall I’m happy.  I just really miss the sassy archangel being a more permanent fixture on the show.

Moments before Gabriel disappears, Castiel asks him if he was really alive and we’re given an ambiguous eyebrow wiggle that leaves the door wide open for the angel’s return.  Whether they’ll ever actually return him to us is still not known, but it’s clear that the showrunners are aware of how much he’s loved.   During Comic Con 2013 I was lucky to have a few moments with Producer Jim Michaels and when I questioned him about Gabriel he made it clear that they were very aware of his popularity.  I’d say his return is one of the most demanded, second only to Castiel’s after his departure in season 7.  There’s not as large of a movement for Gabriel’s return as there was for Castiel, but fans have definitely been vocal about how much they love him and we’ve definitely been heard. It’s possible that having Gabriel return this way was an attempt to please our desire to have him back without rendering his very emotionally impactful death completely meaningless.  It’s a hard balance to strike and while I’m sad that it wasn’t really him, I’m still grateful for the effort.

The story is consistently returning to the idea of Castiel being a leader to the angels that are rebelling against Metatron.  It’s become clear now that this is a carefully written plot by Metatron, so my earlier conflicting emotions over this appear to be justified.  I very much enjoy the idea of Castiel being a unique angel that others look up to and admire, but he’s stated repeatedly that he does not want to be a leader.  The last time he tried to lead things went terribly wrong and he disappeared for the better part of a season.  He was essentially presumed dead until he was found without his memories in the latter part of season 7.  As many fans are predicting that the season will end with Heaven and Hell being permanently sealed off and Misha has yet to be signed on for season 10, it’s also a concern that he may lead the angels back into Heaven and get stuck on the other side of the door.  So while I admire Castiel’s uniqueness and the admiration he’s earned among the rebel angels, I really don’t want to see him go down this path for many reasons.  I don’t want this to backfire and I don’t want to lose Castiel again.  The end of the episode seems to indicate that he’s going to have to take on the role of leader whether he wants it or not.  I hope this time works out better than the last one. 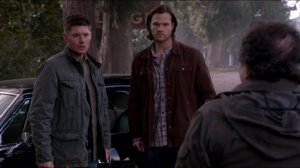 The brothers have possession of Gadreel for a large portion of the episode so while it was brothers-light for a while, their impact on the main plot was definitely heavy.  They start out trying to get information out of him, but their focus quickly shifts when it becomes clear that he’s valuable in other ways.  The Mark of Cain causes Dean to nearly kill the angel out of rage, which doesn’t really seem like a problem for Gadreel.  The angel would rather die than be chained up and is very purposefully egging Dean on.  It’s hard to get information out of someone who is willing to die, and I really don’t like the idea of Dean torturing for information in the first place.  It hits too close to his time torturing in Hell and the torture scene with Alastair.  I’d rather we just leave the idea of chaining people up and hurting them to make them talk behind entirely.  It’s overplayed.

It quickly becomes clear that Gadreel a useful bargaining chip with Metatron, who’s holding Castiel captive.  They make an even trade with Metatron to gain Castiel’s freedom, proving once again that Castiel is important to the brothers beyond just his usefulness as an angel.  They could have outright refused the trade, killed Gadreel out of revenge, and stuck their middle finger up at Metatron, but they would rather have Cas back more than any of that.  Though Cas left down his separate path once more at the end of the episode, I’m grateful that the narrative cemented him as an important part of the Winchesters lives.  The reunion of Team Free Will was very touching and I was glad to see all three boys back together, even if it was incredibly brief.  Thanks for the reunion, Robbie Thompson. 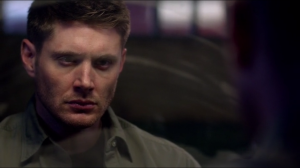 The episode gave us a lot of great stuff and moved us back towards the main plot.  I’m always a little disappointed when we move away from story arc heavy episodes, so this trajectory near the end of the season has me hopeful that we’ll be heavy on plot through to the finale.   I’m definitely nervous, though.  I don’t think there’s ever been a finale of Supernatural where I haven’t been scared, but Misha’s uncertain contract for next season has me deeply concerned about Castiel’s fate.  I feel like I’m reliving the summer between season 6 and 7 all over again.  The effect that the Mark of Cain is having on Dean is also extremely worrying.  We’re seeing a much darker side of him and he isn’t entirely in control of his actions.  While last season ended with Sam weakened and vulnerable, the Mark of Cain plot could very well turn the tables and leave Dean suffering in the final moments.  It’s going to be a very nerve wracking few weeks as we wait for the finale, but the one silver lining is that there are no more hiatuses between now and the end of the season.  The Supernatural season 9 finale airs May 20th.

Previous:Game of Thrones 4×02 Review: The Lion and the Rose
Next: POLL: Favorite Mid-season Show