Game of Thrones 4×02 Review: The Lion and the Rose 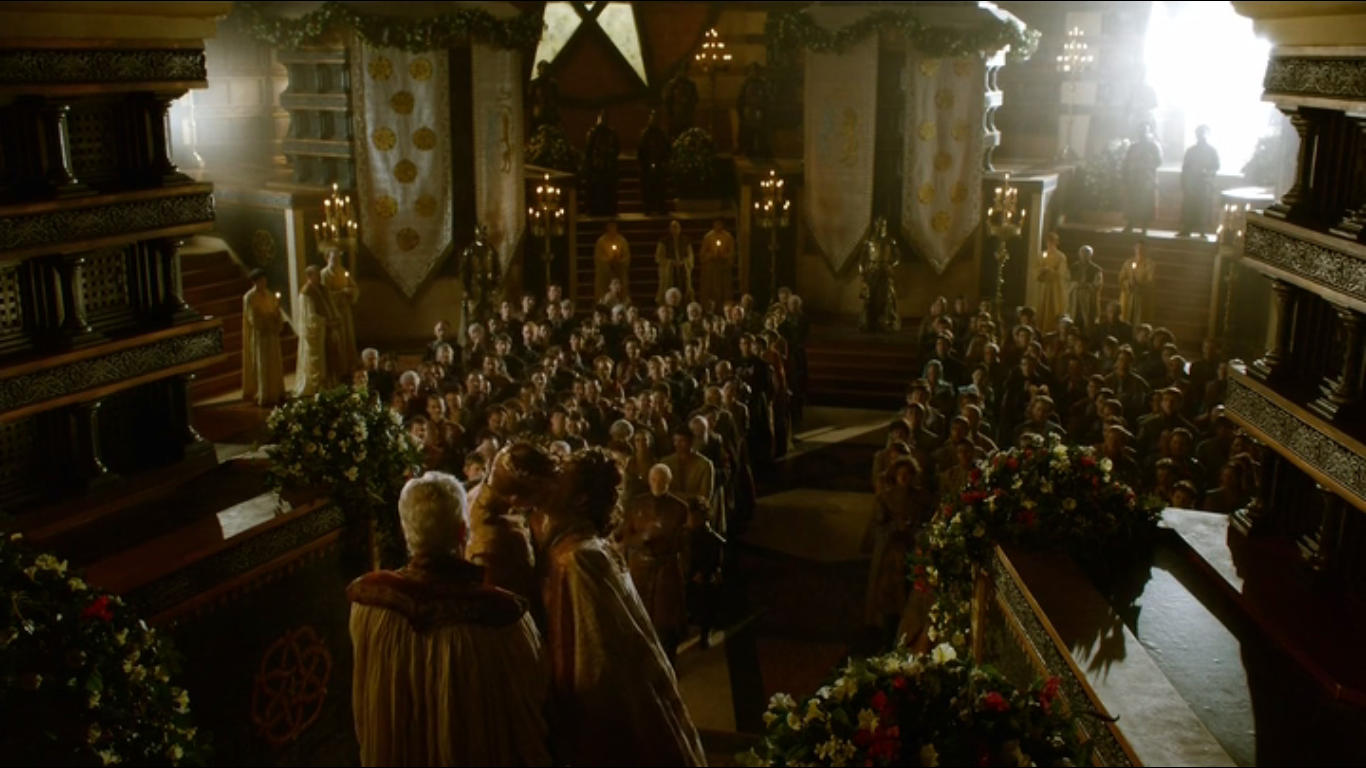 Spoiler Warning: This review DOES NOT contain spoilers from the book other than to highlight differences between content already aired in the show and the equivalent storyline in the books.  This review is generally safe for the show only crowd.

Game of Thrones fans usually have to wait until the 9th episode of the season to get our big shocker (Ned’s execution, the Battle of the Blackwater, the Red Wedding), but there’s far too much ground to cover this season for the writers to have held out that long.  Here we are just two episodes in and one of the most unexpected moments from the Storm of Swords book has been laid out in front of us – we made it to the “Purple Wedding”, and as expected, social media was a complete mess when the big moment happened.  This may have been the episode’s climax, but it wasn’t the only interesting scene. We also saw characters who haven’t appeared since last season, and The Lion and the Rose also managed to further several other plot lines as well.  It was a jam packed, brutal, and shocking episode that’s a powerful reminder of just how unpredictable this story truly can be. 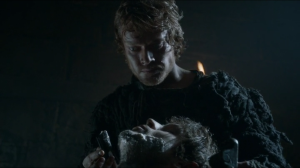 Before we get into what is undoubtedly the most talked about portion of this episode, I want to touch on some characters who we haven’t seen since last season.  This episode marked the return of Lord Bolton’s bastard son Ramsay Snow, and Theon Greyjoy, who now goes by the name ‘Reek.’  As a brief refresher, Lord Bolton was the one who stabbed Robb Stark at the Red Wedding – in fact, he was one of the key characters in that whole fiasco, along with Lord Frey and the Lannisters.  And when we last saw Ramsay, he was in the midst of brainwashing Theon through torture, and he even went so far as to chop off Theon’s bits.  Watching Theon’s torture was difficult for most people, including book readers, and I often find myself skipping past those scenes during my rewatches.  We aren’t shown his transformation into Reek in the source material – instead readers are introduced to a ‘new’ character, whose identity as Theon Greyjoy isn’t revealed until later.  I don’t particularly enjoy the gratuitous torture scenes, but I can understand why they decided to introduce him in this way.  It would be difficult to do a ‘reveal’ later on when it’s the same actor playing both characters, so showing us his transformation is done for a practical reason as well as for dramatic impact…it makes sense, even though those scenes are some of my least favorite in the show so far.  The Lion and the Rose makes it very clear that Theon is now well and truly brainwashed and seemingly completely loyal to his ‘master’ Ramsay.

We also got to see Dragonstone this week, and though many feel that the Dragonstone plot tended to be overshadowed by everything else going on, this batch of incredibly complex characters really stands out to me as being one of the most interesting groups in the whole story.  Melisandre burns people alive and murders her enemies, which is undoubtedly bad, but for some reason I still appreciate her for her ability to accomplish so much when things have been stacked against her since birth.  She’s a woman in a man’s world, and despite her past as a slave she has now climbed up to be a top adviser to a man vying for the throne. I can’t help but admire how far she’s risen out of sheer determination.  Likewise, despite the fact that Stannis is a really gruff and unlikable fellow (who also went along with the plot to murder his brother Renly), I appreciate him.  Yes, murder is obviously bad, but somehow it’s difficult to hate a guy who puts himself on the front lines with his soldiers. That’s something I have to admire, and it’s yet another reason why my feelings toward these characters are so complicated.  I can see the bad things they are doing, but I respect their willpower nonetheless. 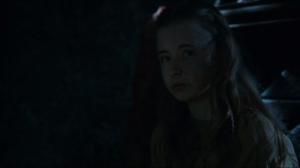 It seems to me that the real heart and soul of this group is Shireen, Stannis’s young daughter.  She’s afflicted with Grayscale and is the only surviving child of Stannis and his wife Selyse.  There’s definitely some resentment over the fact that the three sons Selyse gave birth to all died, leaving a girl with a very visible flaw as the only living child, and for these reasons she’s often rather tucked away and hidden from view.  She’s a kind hearted soul, though, and it’s a shame that there’s such a dark cloud hanging over her head.  She brings out the softer side of Stannis, who stands up for her repeatedly throughout dinner, defending Shireen when Selyse suggests beating her.  Shireen’s friendship with the Onion Knight is also sweet – she taught him how to read, he brings her gifts…the whole thing is really adorable, and she’s definitely my favorite part of Dragonstone.

But let’s get real here.  The part of this episode that had everyone freaking out was of course the death of Joffrey Baratheon.  The scene when he accepted Tyrion’s wedding gift of a book, and we nearly thought we were seeing a touch of kindness from Joffrey, didn’t last more than a few seconds and was incredibly awkward from beginning to end.  He then proceeded to chop the book up with his new Valyrian Steel sword, bringing back the Joffrey we’re familiar with.  The rest of the wedding went on to further the point that Joffrey is truly a big evil jerk, which isn’t really something that needs to be clarified, but it certainly made his death more satisfying.  He spent a good portion of his wedding tormenting his uncle Tyrion and humiliating his subjects who were ‘honored’ enough to perform for the King on his wedding day.  The writers clearly want you to get the memo that Joffrey is bad, just in case you didn’t already understand that.

The depiction of his death was more brutal than I’d imagined it would be.  I’ve got to hand it to both the makeup department and Jack Gleeson’s performance for surpassing my expectations.  I almost felt bad for him, seeing how much pain he was experiencing – almost.  But if there was ever a death in fiction worth being excited about, Joffrey’s death is most certainly it, though that doesn’t mean that you can’t be emotionally moved by it.  For all of Joffrey’s flaws, Cersei still loved her son and you can see her heart breaking when she realizes he’s going to die. The relationship between Cersei and Joffrey was complex, but he was her first born child.  For a long time it was only the two of them, and having him torn away from Cersei is a tragedy for her.  So while we may be cheering over his death, I truly do feel bad for Cersei’s personal loss. 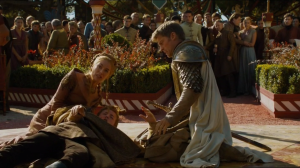 Even though Joffrey is an absolutely despicable character, the impending aftermath of the event isn’t going to be sunshine and rainbows.  We already saw in the final few seconds of the episode that the finger pointing has begun; anyone who has ever been even remotely upset with Joffrey is a potential murderer.  And really, that’s an incredibly long list.  No doubt fans of the show who haven’t read the book will be theorizing about who did it for a good long while, and I am most certainly looking forward to all of the theories that are about to spring forth.  Dearest book readers, we’ve been so good about not spoiling them so far, so let’s not butt into their theory conversations unless explicitly asked to do so, okay?  Let the show folks have their fun here like we all did.  If any of you spoil them on this I will track you down and feed you to Daenerys’s dragons.  Okay?  Okay.

Speaking of Daenerys, there was a startling lack of her in this episode, but there was so much going on that this absence was pretty understandable.  We didn’t see Jon Snow or Samwell, or Arya and the Hound, either.  The scene with Bran was no more than a glimpse into his story, though we were shown that Meera and Jojen are teaching him what it truly means to be a warg.  His visions are becoming more complex and his time spent projecting into animals is reaching nearly dangerous levels.  We also touched upon Tyrion and Shae’s relationship, which appears to be at the end of the line at this point.  As Tyrion and Shae are my favorite couple on the show, I’m obviously quite saddened by the road that this is going down.  These characters and plot lines will have more in future episodes, no doubt, so for now let’s just bask in the Purple Wedding a bit longer.  It was an incredibly eventful episode and will no doubt be water cooler talk for many days to come.