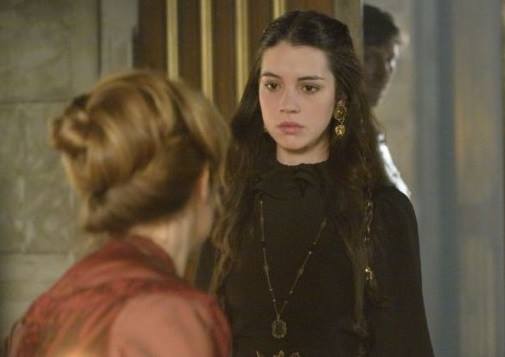 All hail, Mary Queen of Scots!  Long may she reign!  She really asserted herself in this episode, and I loved it.  Lady Kenna actually showed great depth, and Lady Lola actually caught a break!  Henry’s illness appeared to have taken a turn for the worse, and we don’t seem to be any closer to finding the cause of it.  Mary and Francis are at odds with Catherine once again, and Catherine’s deeds inadvertently caused a rift between the happy couple.  This season is drawing closer to its conclusion, but first, let’s take a look at Liege Lord. 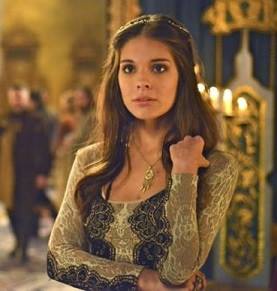 Bash was a bit of an ass in this episode, which a part of me enjoyed.  Throughout this season he’s been built up as a man who could do no wrong, so it was nice to see him with some faults.  He and Kenna were still trying to adjust to married life and Bash seemed to condescend to her just a bit.  He was even a bit harsh when he said that he could never loved her, almost seeming to say that she would always rate second in his eyes.  They agreed to let the past stay in the past, but we all know that’s easier said than done.  Later in the episode Bash assisted Mary in helping one of Catherine’s ladies in waiting flee the castle, much to Kenna’s displeasure.  I said in my introduction that Kenna showed depth in this episode, and that depth was in the form of putting herself at risk to help her country.  Up until this point, she has been a very selfish and shallow character, making her a bit unsympathetic to me.  But later when Bash confronted her about being in Henry’s chambers, she declared she was more than just a simple girl who loved pretty dresses and jewels, that she loved her country.  She threw Bash’s interaction with Mary back in his face, pointing out how quickly he had been willing to jump for her and how he would never do that for Kenna.  I couldn’t help but feel sorry for Kenna because she did have a point.  Kenna didn’t do what she did out of any lingering feelings for Henry; Bash did.  Kenna may not expect Bash to love her, but I don’t think it’s too much to ask that he care about her and consider her feelings.  But Bash turned it around toward the end of the episode.  When Henry was laying on Kenna and she wanted none of it, Bash came to her rescue and they had a very sweet moment together.  Their situation is a bit awkward, but I like how they are together.  I hope that the writers continue to give Kenna more depth and expand her character.

Speaking of Henry, his illness seemed to take a turn for the worse during this episode.  His behavior is getting increasingly erratic, with Catherine slipping herself in to take more responsibility.  He seemed to be losing interest in Penelope, the lucky kitchen girl who seemed to relish looking down her nose at Catherine.  The most troubling detail of Henry’s story in this episode was towards the end before he put himself in Kenna’s lap.  He was looking around the court when he saw a young man standing there.  He was holding a tennis racket and had a vacant expression.  He was either a ghost or a hallucination as he quickly disappeared in the next shot.  Perhaps this was another dark secret from Henry’s past, coming back to haunt him when he is most vulnerable.  I’m interested to see where the writers take this plot point, as the appearance of this person seemed to shake Henry. 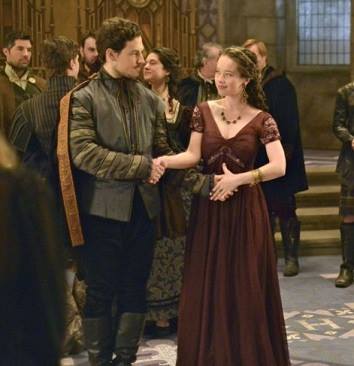 Thankfully Lola got a bit of good luck in this episode and not a moment too soon.  Lord Julian continued to be his extremely charming self and asked if Lola would marry him.  He revealed that he had been married twice before and his wives had died in childbirth, making him resolve to never have children.  Yikes!  Not exactly good news for Lola, given her situation.  But she accepted his proposal and later came clean about the pregnancy.  Yet again, Lord Julian was gracious under pressure.  He apparently had secrets of his own, saying he would let Lola keep the identity of the father her secrets if she let him keep his.  I really like them together.  Julian is very kind and understanding, and I love how well he treated her.  From a 21st century mindset, the fact that he lost two wives might be suspicious, but in their time period, childbirth was quite dangerous and the mothers dying was not uncommon.  I’m curious about what they’re going to do about Lola.  Will she and Julian disappear for a while until Lola has her baby?  What happens if it comes out blond?  Things will get extremely awkward if/when Francis finds out.

Mary got her first taste of what being a queen is like, and the learning experience was not a pleasant one.  The episode began with Mary being confronted by one of Catherine’s ladies in waiting, who asked for Mary’s help escaping the castle in exchange for information.  That information was a secret clause in Mary and Francis’ marriage contract that stated if Mary died without an heir, Scotland would fall under control of the French.  Mary later found out from Francis that her mother had been involved, as she received a substantial payment after the wedding for services rendered to the crown.  So she and Francis formulated a plan to expose the contract to Mary’s mother’s Protestant enemies.  But how to accomplish this?  Mary invited all the Scottish lords in the area to the palace, the group led by Lord MacKenzie.  During the revelry, Mary requested a “private” audience with MacKenzie, only to have the man followed by his men.  But Mary rolled with the punches and quickly proved herself to this group of him.  Her speech was pretty awesome and even I got chills watching her.  Mary really came into her own in this scene, and she had every man in that room eating out of the palm of her hand.  MacKenzie pledged his fealty to Mary and agreed to leave for Scotland the next day. 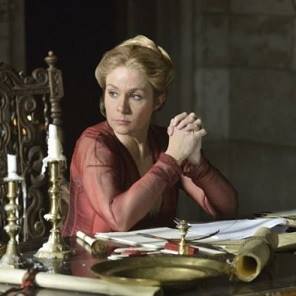 Not so fast!  Catherine was clued into their plan when she slept with one of Lord MacKenzie’s men, and he unwittingly spilled the beans about MacKenzie meeting with Mary in private.  But with the size of MacKenzie’s group of men, it was pretty noticeable when they left the main hall.  Either way, Catherine organized a raid on the tavern where the men decided to have one last night of fun before leaving France, and everyone inside was killed.  Mary later confronted Catherine, slapping her across the face, and Catherine dealt her a hard lesson about what it means to be a ruling queen.  It isn’t all pretty poses and parties.  Every action has a consequence, no matter how negative or positive it may be.  But Mary refused to be beaten.  She approached Catherine later, saying that if the older queen didn’t hand over the secret contract then Mary would expose Henry’s ever-growing madness via the three letters she sent out with riders.  Francis was all smiles and support while they were with Catherine, but as they were getting ready for bed Francis’ amusement disappeared when he found out that Mary was quite serious in her threat.  From the beginning of the show, loyalty to their countries has been a point of contention between the two young royals.  And as Mary stated in this episode, if the time ever came that she had to choice between France and Scotland, she would choose the latter.  If the previews for next week’s episode are anything to go by, tensions are going to continue to raise between the two countries and by proxy Mary and Francis.  They’ve had their period of being simply newlyweds.  Now they have to face the reality of juggling their marriage with the fates of their two countries.  Mary appears to be growing into her power as a ruler, and Francis might be threatened by that.  Add that to the fact that Mary knew and helped Lola conceal her pregnancy, and you have a powder keg primed blow this relationship wide open.

All and all, this was a pretty good episode.  I really enjoyed Mary’s embracing her power as a queen and the broadening of Kenna’s character.  So what are your thoughts?  What were your favorite and least favorite moments?  Whatever they are, comment below and thanks for reading!