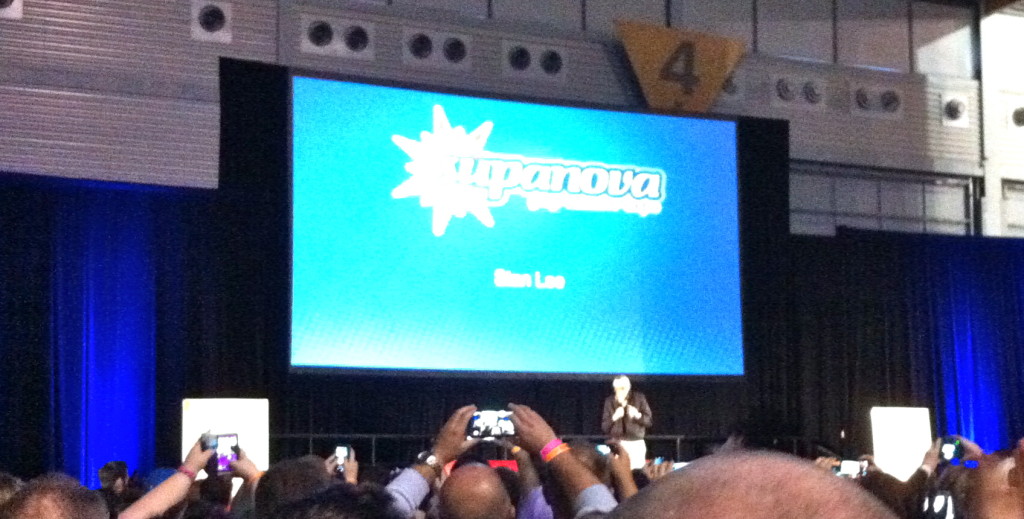 Supanova Expo in Sydney is always one of my favorite weekends of the year. Sure it doesn’t have the name recognition of events like San Diego Comic Con, but it’s always well organized and a lot of fun. This year was no exception – not only were there a bunch of awesome fans in attendance, but I was also in the presence of Stan Lee for the first time, which is something that’s on basically every geek’s to do list.

The thing I learned about Stan Lee, is that I want one, I want a pocket-sized version that I can take with me everywhere because he is adorable. I know that thousands of fanboys are cringing at the fact that I just referred to their god as adorable, but honestly I don’t think there’s any other way to describe him. I attended two of his three Q&A panels and while he recycled stories, both panels were incredibly entertaining ways to spend 40 minutes. I’m pretty sure everyone felt like they were getting their money’s worth.

One of the highlights of Stan Lee’s panels was him talking about Kevin Smith: “Kevin Smith is a great guy and I’ve known him for years. Now you know how rough he is and the language he uses. But I got to tell you something you don’t know about him. He used to, every few months, have a poetry reading at his house. Where he’d invite people like me, who had nothing better to do, to come to his house and read poetry.”

Unfortunately he said he has no plans to work with Kevin Smith currently but he also said that “if he should ever ask me to do a show with him or be a guest on his show I would say yes so quickly that you couldn’t believe it, because he’s a great guy, a talented guy, I’m very fond of him even if he doesn’t like me.” How could anyone not like Stan Lee? Like I said, he’s adorable. Yes, adorable!

As for why he thinks the Marvel characters are so popular? Because they’re “wonderful”, of course (and I wish you could all hear the way he says “wonderful”, because it’s beautiful). Lee added, “It’s just amazing how well they are doing without any help from me. Although people may be going to them because of my cameos.”

In case you didn’t know, Stan is his own biggest fan. In fact, he has a theory about why X-Men: Days of Future Past is doing so well. “You know why X-Men made so much money and is making so much money? I don’t have a cameo in it. But that was a plan for this reason, and I think you’ll understand. Somebody goes to the X-Men movie. The movie ends and he says: ‘I didn’t see Stan’s cameo, I must have blinked my eye or maybe I was reaching for the popcorn and I missed it, I don’t want to miss the cameo.’ So what does he do? He goes to the box office and buys another ticket. So the movie made twice as much as it would have made if my cameo was in it. That was a plan, a very shrewd plan.”

He also told the story of Spider-Man’s origins, which is always fun, especially hearing his publisher’s original thoughts about the character. “I was so excited I ran into my publishers office, I told him what I wanted and he said to me in words that will live forever: ‘That is the dumbest idea I’ve ever heard, Stan.’ He said, ‘First of all, people hate spiders. You can’t call him Spider-Man. He can’t be a teenager, teenagers can only be sidekicks. And you want him to have personal problems? Stan, don’t you know what a superhero is? They don’t have personal problems.’ So it wasn’t exactly the enthusiastic reception I had been expecting.”

We’re all forever grateful that Stan didn’t let go of that arachnid-inspired teenager with way too many personal problems, because what would the world be without Spider-Man? Almost as bad as a world without Stan Lee. He is so cute that Agent May (Ming-Na Wen) crashed his panel just to kiss him on the cheek. Again, adorable is the only way to describe him!

I’ll leave you with his story about his favorite Marvel Cinematic Universe cameo (or as he likes to call them, “supporting roles, almost starring roles, because the picture very often hinges on that moment”):

“I love all my cameos. I never told you this and I shouldn’t say it but I’m really my biggest fan. I see these cameos and think ‘wow, that’s great, I didn’t know I was so good’. My favorite one, I think, is the last one that I did for Captain America, where I play a security guard and his costume had been stolen and I was supposed to be guarding it and I look at the empty space and I say – I don’t know the exact words, something like: ‘Oh I am so fired.’ You’ll all admit, I put so much emotion [into it], nobody remembers the next scene because they were still…crying, their eyes were…wet with emotion.”

I’m so glad I got to cross “seeing Stan Lee” off my bucket list, and I would recommend it to all my fellow geeks that get the opportunity.

Previous:Teen Wolf’s Tyler Posey: ‘we emphasize the gay storyline’….Wait! What?
Next: “Descendants” gives kids to famous Disney villains…Too much?