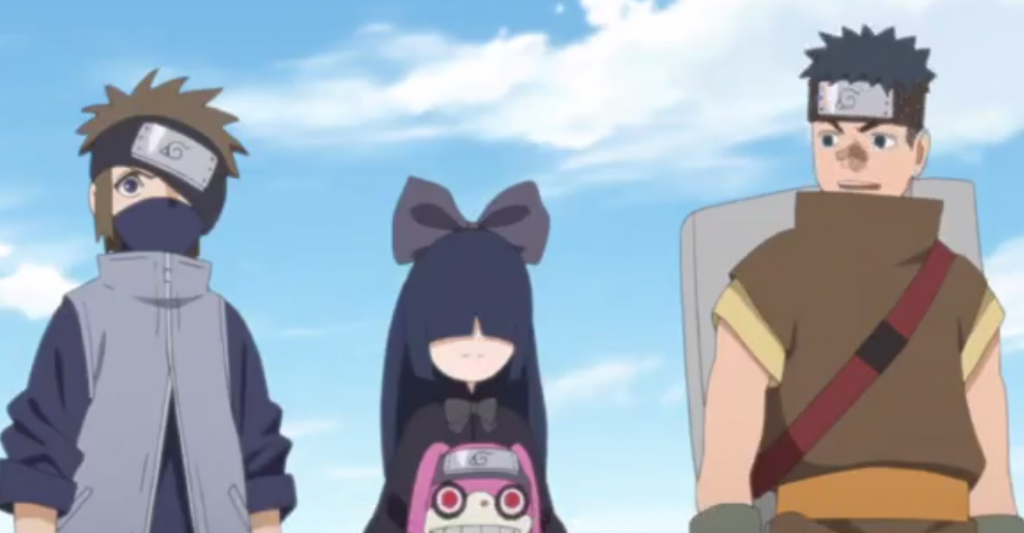 As far as my opinion goes, I enjoyed the latest Boruto anime episode focusing on Team 25. These kids have some interesting skill sets and I hope to see them soon.

I have noticed many Boruto fans wondering about the powers members of Team 25 possess. I don’t blame such fans for being curious considering the unique character designs the members have. I’m glad the latest episode, titled ‘Team 25,’ gave us some answers.

Houki Taketori is a Kakashi fanboy and has a photographic memory. Hako Kuro gives us her best Gothic Lolita puppet user aesthetic. She also has incredibly impressive skills of deduction. Renga Kokubo has the blandest design, but I still liked his defensive ability.

The three ninjas seem to be having issues trying to work as a team. Each character recognizing their strengths and weaknesses to become better is what this episode was about. We also got a lot of Kakashi in his Sukea disguise. It made sense for Kakashi to be part of such filler content because of Houki fan-worshipping the retired Hokage. I still remember how certain fans thought Houki was Kakashi’s son. However, that certain fan theory was debunked in ‘Team 25.’

The plot involved a bomb threat. Almost every ninja in the Leaf Village was working to find the bombs as well as the terrorist. The only team not involved was Team 25 because it didn’t have an impressive track record of completing missions.

Over the course of the episode, we got to see the young ninjas finally figuring out how to work well together. The catalyst was Houki realizing he wasn’t fit to lead the team. Seeing Houki give the leadership role to Hako was a mature decision for him to make. I hope kids and certain adults learned a lesson from Houki.

Your desire to become a group leader doesn’t always mean you’re suitable for such a role. It’s always better (while tough) to move your ego aside and accept what someone else can bring to the table as the leader instead of your stubbornness causing failure.

Also, if possible, not every team requires a definite leader. Team members can take turns leading the team depending on the tasks they have to accomplish.

I liked Team 25 being selected to handle intelligence missions as a reward for protecting the village from the bombs. Seeing Sai taking them under his wing made me smile.

I hope we get to see these enjoyable characters again in upcoming episodes.