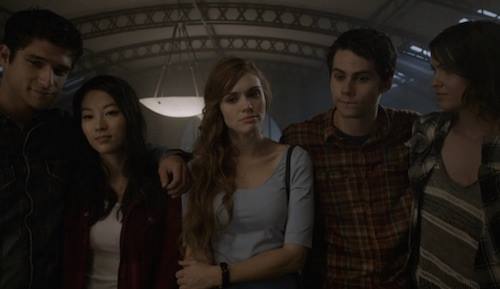 Even releasing the teaser in advance, nothing could prepare viewers for the fifth season opener of Teen Wolf, “Creatures of the Night.”

The teaser sequence finds Lydia in Eichen House. I know the sheriff’s department has a lot going on, but can someone please look into the hiring practices of the employees at Eichen House? I don’t think a single one of them could pass a psych evaluation themselves. After a sadistic orderly tries to jab a needle into her neck, Lydia breaks out some fighting moves Black Widow would approve of and shows off some new banshee powers. The teaser ends with Lydia’s ominous warning, “My friends…they’re all going to die.”

The opening has been changed to reflect the villains of this season, The Dread Doctors (which are a bit reminiscent of The Oni for me, maybe with a little bit of Doctor Who Cybermen thrown into those masks). There’s a sense of steampunk to their look, which could definitely make for a fun season. The opening credits also are a reminder of the very sad fact that Tyler Hoechlin is no longer with the show. However, there are some nice callbacks to his character Derek Hale, even if no one takes the time to address what happened to him after the season four finale.

It’s no wonder Parrish is working phones when he immediately thinks someone is trapped behind a cement wall and just starts chipping away at it. Did he think he had wandered into an Edgar Allan Poe story? What he does find is a werewolf with some intense glow-in-the-dark claws that asks the question every mysterious new person in town wants to know: Where is Scott McCall?

There’s also some more teasing about what the hell is Parrish. The most we get is that he’s something, a game I remember playing in season 3 with Lydia. It seems like viewers can expect a fair amount of Parrish and Lydia scenes together as the show continues to set up a romantic relationship between them.

With the main characters reaching senior year, the writers have introduced new characters waiting to be passed the torch. However, right now, it just feels like Adventures in Babysitting for Stiles and Scott as they deal with Liam. It’s hard to be excited by Liam as it seems like even the other characters find him to be a burden.

Malia’s father returns in this episode, proving that he is still alive and that the Sherriff and Stiles have not just adopted her. Malia spends the episode waiting to hear if she will be joining her friends as a senior, with the writers acknowledging that pre-calc is especially hard when you spent 10 years as a coyote.

Scott and Kira are reunited after she spends the summer in New York with a scene that feels like it should end a ‘80s romcom. But as with most Teen Wolf make-outs, they are soon interrupted by that werewolf that attacked Parrish, giving Kira a chance to whip out her fantastic new belt that turns into a sword. I’m not sure how this works, but it does look damn cool.

This episode introduces new character Theo (Cody Christian), a werewolf that went to school with Scott and Stiles in the fourth grade and has now returned to be part of Scott’s pack. He is most definitely evil. I mean, come on, is Stiles ever wrong when he thinks someone’s suspicious?

I think what most resonates with the audience is Stiles’s overwhelming desire to keep everyone together and for nothing to change. There’s a sweet moment near the conclusion in which Stiles, Scott, Malia, Kira, and Lydia follow a tradition before senior year by writing their names on a library shelf. It’s hard not to get choked up as Stiles gives a small smile at the initials “D.H.” and Scott writes “A.A.” under his own name.

The episode concludes with the Dread Doctors killing the werewolf that failed to finish off Scott before returning to Lydia in Eichen House. A flash of scenes hint at the fates of the characters near the end of the season in peril and distress. Seems like we’re going to be in for a thrilling ride!